Tap the power of “3” for your scrapbook page designs

The stability of threes 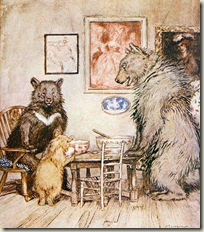 It wasn't just the bears that came in threes! There were 3 beds, 3 chairs, and 3 bowls of porridge.

The human mind likes things that comes in threes: three coins in a fountain, three-ring circuses, and Goldilocks’ three bears.

Speech coaches, writers, and comedians all understand that ideas presented in threes are more easily understood and remembered. Consider:

We feel like we’re on solid ground when we’re taking things in in threes. Life feels orderly and stable.

That’s why a design like the one on “Playing Farm” works. While it denies us traditional margins, bleeding elements off the page and winding white space among the elements, it’s based upon three groupings. The central grouping of three photos is backed up by a foundation made of three journaling cards and three sticker flowers. 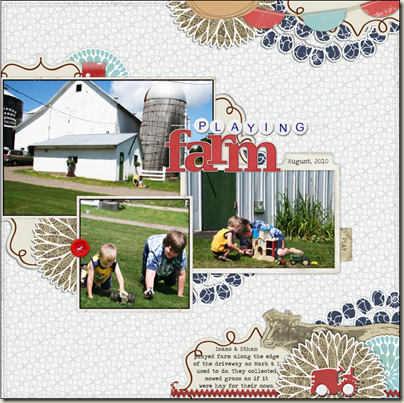 Serious play is a busy layout made accessible with a design based upon threes.

Three framed bits of patterned paper act as the foundation for the large focal-point photo. Three more small framed images (two photos and a framed embellishment) comprise the top layer of the page. There is a lot going on, but items are organized into three groupings: foundation, focal-point, and supporting—and two of those groupings each hold three elements. (Read even more about this kind of design here.) 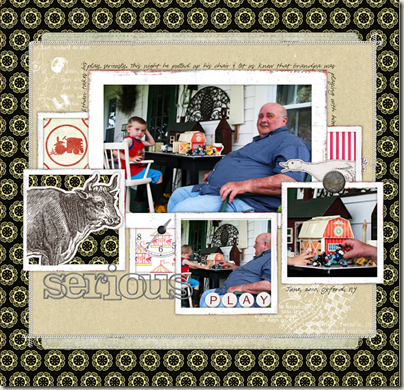 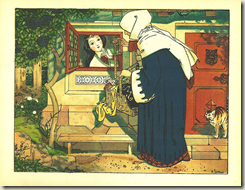 In Snow White, there are three repetitions of the her wicked stepmother visiting and these repetitions move the story forward.

When you’re working with three elements you’ve just enough to set up a pattern, and, thus, repetitions and rhythm.

Familiar stories include the Three Furies, the Three Blind Mice, and even The Three Stooges.

Snow White is visited three times by her wicked stepmother. Jack climbs the beanstalk three times, and so very many protagonists are offered three wishes.

Working with three photos of the same orientation is one of my favorite ways to put together a page quickly and easily. You can line them up all nice and tidy as Amy has done on “Xmas Charm” or you can do a bit of staggering as I’ve done on “Jumping the Gun.” 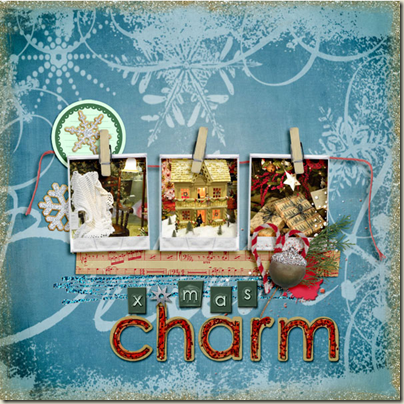 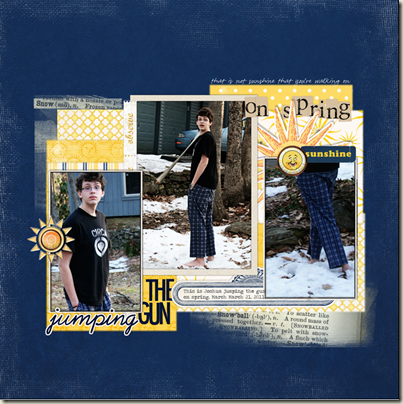 Jumping the Gun by Debbie Hodge

A “claptrap” is a rhetorical device (without a whole lot of deep meaning) that uses threes to gain audience applause. Consider “Veni, vidi, vici,”  “Location, location, location,” and “Lies, damned lies, and statistics.”

The repetitions appeal and get us clapping – as I want to do when I look at Kayleigh’s “DQ Night” and the repetitious “fun fun fun” below the photo block. 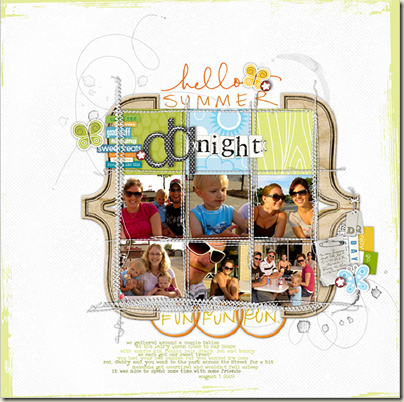 On her playful “Don’t Leave Your Mother,” Doris placed three clouds across the top of her layout—metaphorically putting a sky above her son’s head and setting the scene for her message to him. 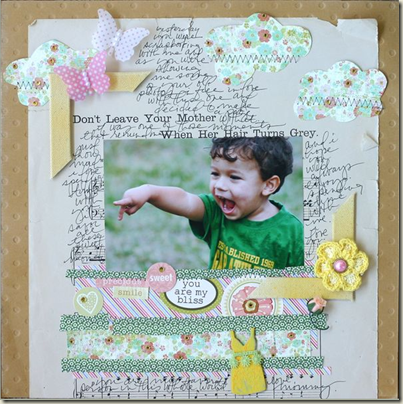 Check out the cluster of three yellow buttons on Celeste’s “Silver” and the three snowmen on Emily’s “SnowHorse.” They’re grouped together just like I imagine those three bears to be—and they make delightfully charming embellishment spots. 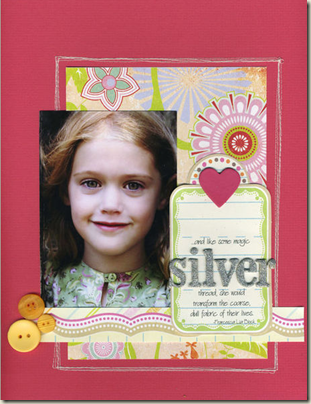 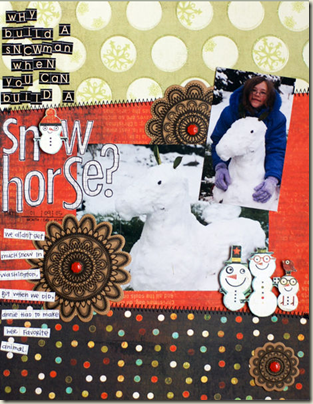 You only need three to make a pattern

Three is the smallest number you need to create a pattern – and to signal a pattern broken.

Consider the numbers 2, 4, and 8. Once you see the “8” you understand this is a pattern of doubling rather than of adding 2.

Check out the column of three embellishments at top right on “Life is a Highway” and the circle-square-circle pattern they create. It’s fun, it’s eye-catching, and . . . it’s a grouping of three!

On my layout “Schlepper,” I place a pattern of small buttons: two together on the left of the photo and one on the right. The eye connects these and registers a pattern of “close, close, space.” 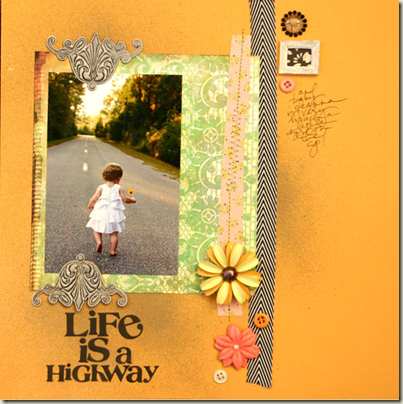 Life is a Highway by Doris Sander 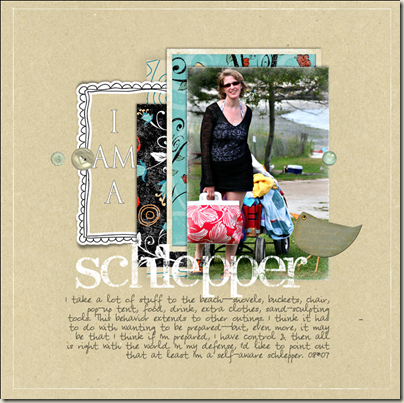 I am a Schlepper by Debbie Hodge

Creating a progression with three

Three is a number that’s just enough for creating a progression. It’s the shape of successful fairy tales, novels and films: the three-act structure. It’s all about a beginning, middle, and end and the inherent tension that keeps you turning the page, tuning in, or following the visual path on a scrapbook page.

Creating a visual triangle of three points that stand out  (by repeating something three times) is one of my favorite ways to set up flow (or progression) on a scrapbook page.

On “Yummy Easter,” Kayleigh has incorporated three oh-so-bright pink spots that you can’t miss. The pink “yummy” tells you to start here—and then your eye moves naturally down to the pink clip at bottom right and then over to the elephant’s ear. 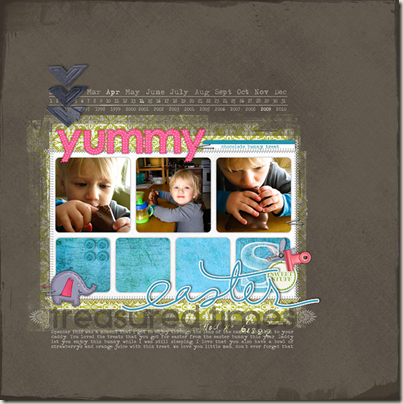 Now it’s time for me to tell you to get going with threes on your own scrapbook pages, which just might be better said as “Ready, Steady, Go!” 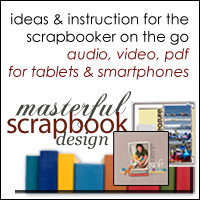 Do you like thinking about scrapbooking and design–learning what works and why? Do you want to  to get your stories into your scrapbooks in meaningful and enduring ways? So do we! Click here and join us at Masterful Scrapbook Design today.

“I’m sharing my awesome with Momma Made It Look Easy and you can too.”