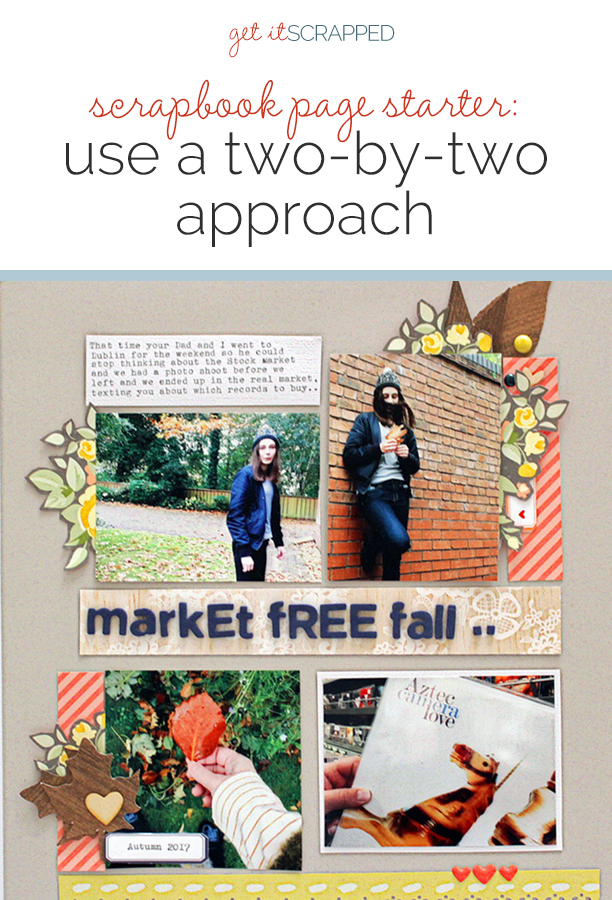 The 2-by-2 design is one of several layout configurations of combined elements that scrapbookers use again and again when making scrapbook pages (blocked, clustered, shelf, cross, band and more).

These foundations are used again and again because they work well for housing the most frequently encountered combinations of elements (1 to 5 photos with title and journaling) and they consistently yield well-designed pages.

A big part of the Get It Scrapped membership are the 22 Scrapbook Coach classes (with 88 video lessons) on scrapbook page foundations. In the class on 2-by-2 grids, there are four different takes on the 2-by-2 design, and our creative team shows you how they use them here.

Iris Fox says, “I made this page to capture my feelings about my daughters going through a period of time where they were not getting along. I had to be quick, but would manage to snap a shot every now and then of them being affectionate.”

“I used the 2-by-2 patchwork format so that I could fit photos with different proportions. It worked well with the photos I had picked because the two kissing photos can be opposite each other on the diagonal, and vice-versa for the hugging photos. This is how you would match up fabrics in a four-patch quilt block.”

“I must confess this design was a little too rigid for me. I wanted to do more overlapping and layering. I might use the patchwork as a template for placing my photos, but I think next time I would use a background with more interest, spill over elements from one block to the next more, and ruffle up some edges. I did like putting the title in an unexpected place – between photos – instead of on the side of photos as I tend to do.” 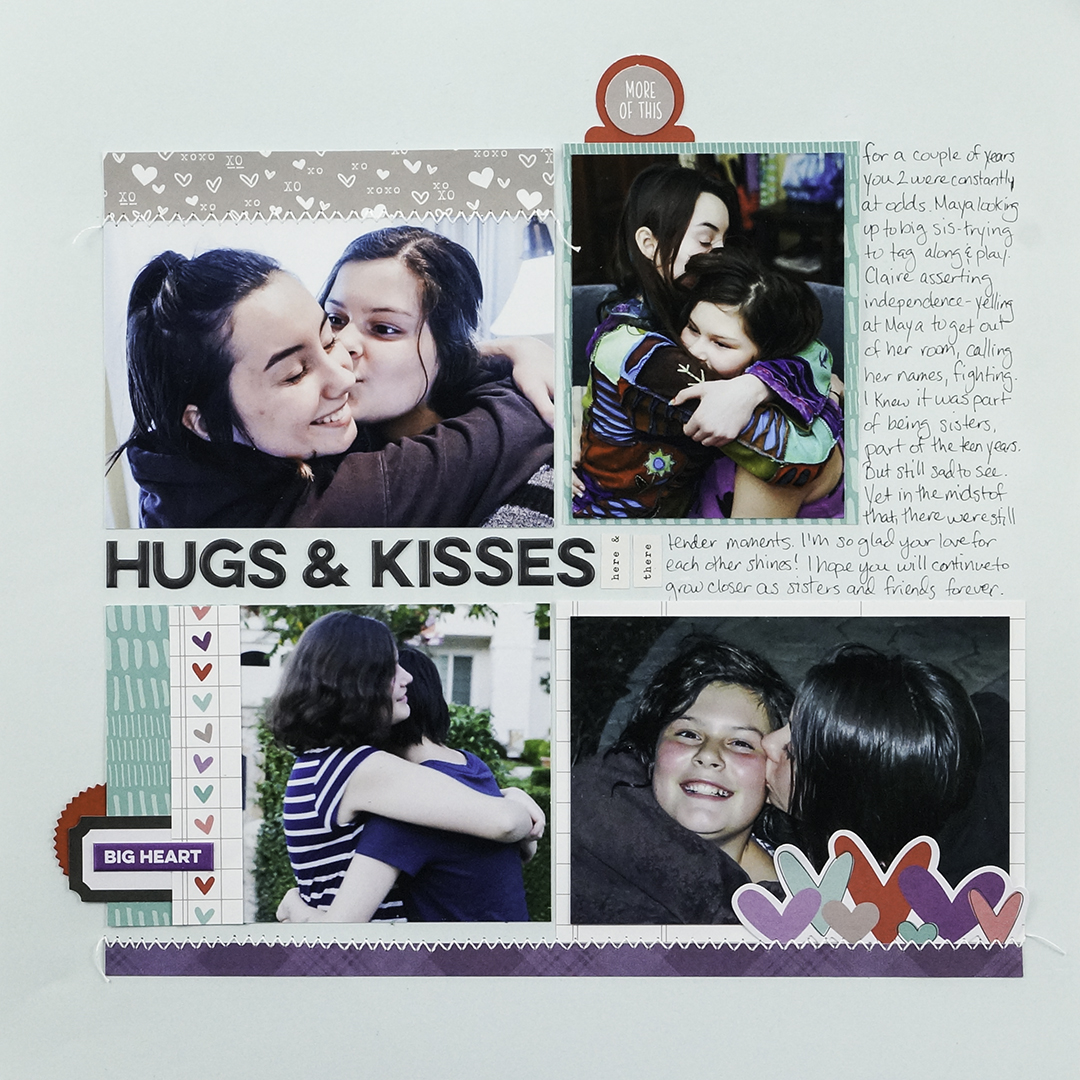 Stefanie Semple says, ” I took two photos of two of my children’s gym gear and compared and contrasted their gear and their goals.”

“I used the kitty corner approach because I ws creating a his-and-hers layout that showed the contrast in the designs and the colors and patterns. Playing with the diagonal arrangement allowed more movement left to right and not only down a column.” 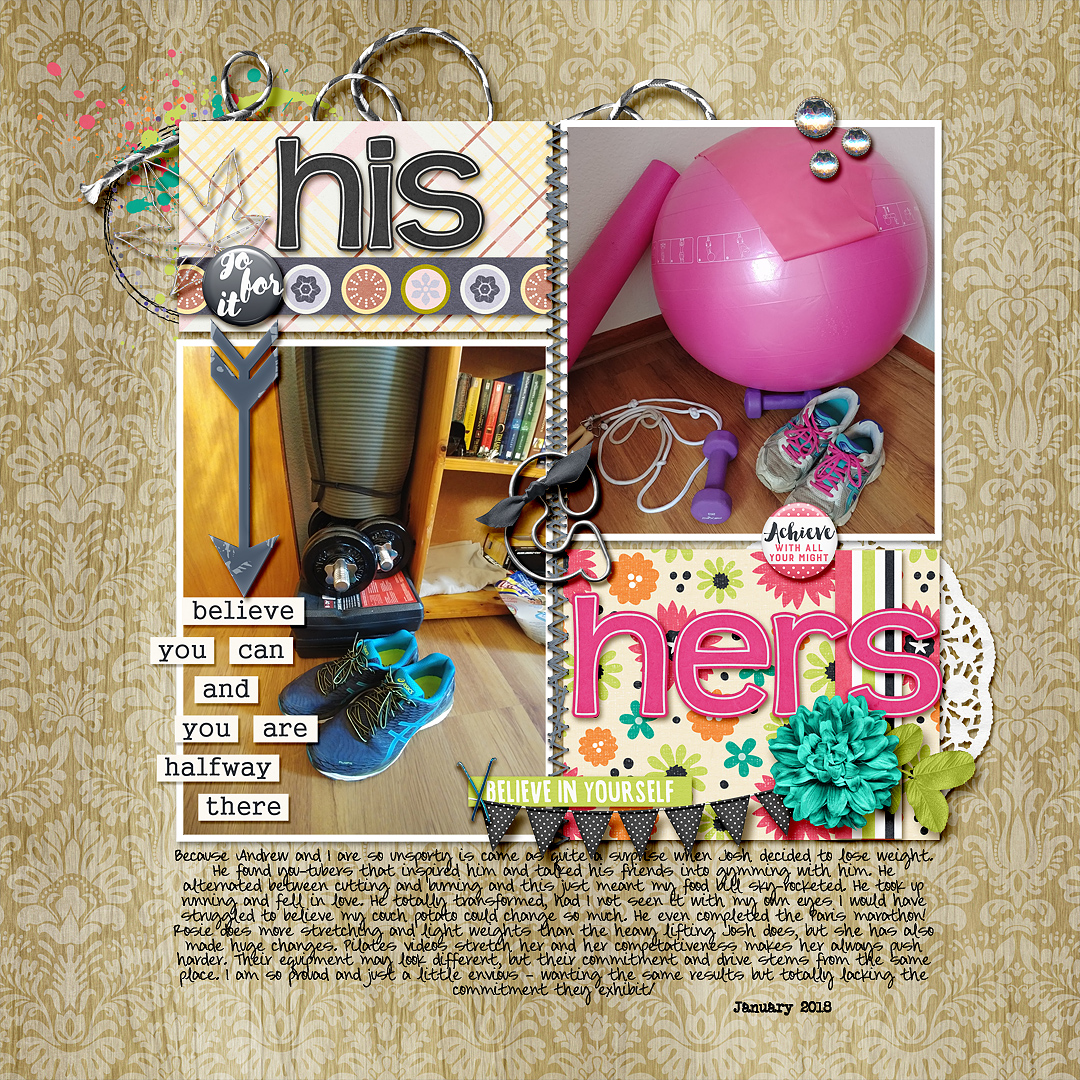 Sian Fair says, “This page records an afternoon I spent with my daughter just before her dad and I left for a weekend away.”

“I used a ‘patchwork 2-by-2’ approach because I liked the idea that my story was about two groups of two who are still all joined or pieced together in various combinations depending on who is home. I , often use a patchwork approach in my scrapbookingbut it’s not usually with such a firm hand. I most often gather up layers and odd shaped pieces of paper and see if I can pull them together on the page.”

“What I really enjoyed about following more regimented guidelines is that I ended up with a multi photo page and I don’t do that very often at all. Making this page has made me want to work my way through the Scrapbook Coach series and have fun letting someone else do the heavy lifting when it comes to the design!” 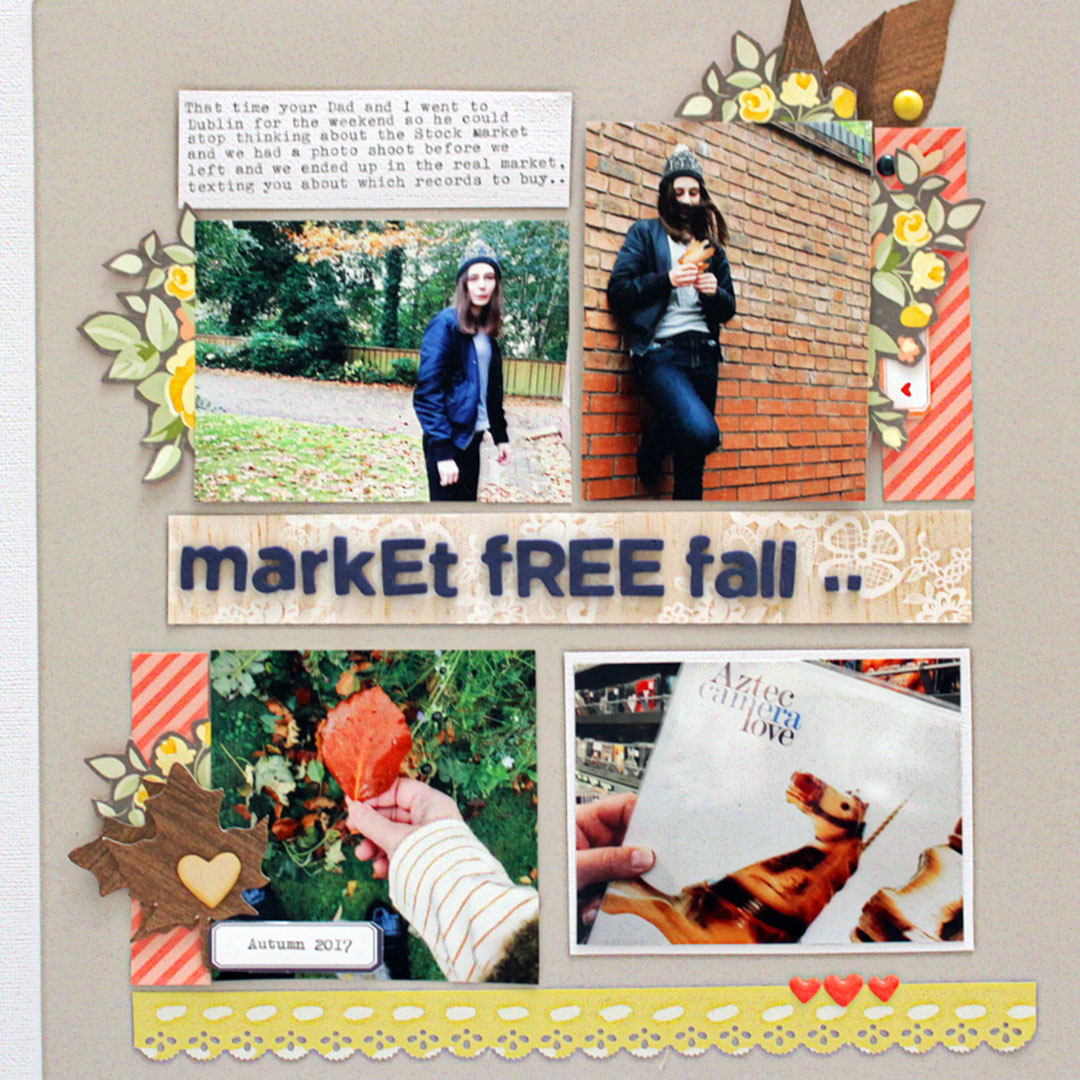 Marcia Fortunato says, “My layout is about how much I love living on a lake, especially in winter when the lake is frozen solid.”

“Because I had four photos which most completely show our different winter activities on the lake, none of which stood out as a clear focal point, using a 2-by-2 design made sense. I kept all four photos the same size and matted all four, then added small pieces of papers and die cuts behind the photos. I wanted to keep my photos together, and I wanted to split the title from the subtitle, so I also moved the title to the top of the block, above my grid of photos. I created the horizontal band along the bottom by using a few embellishments and continuing my title there.”

“Since I like to create pages with several pictures, this is a foundation I use quite often. I like its simplicity and its flexibility in accommodating multiple photos. It is definitely one of my go-to designs.” 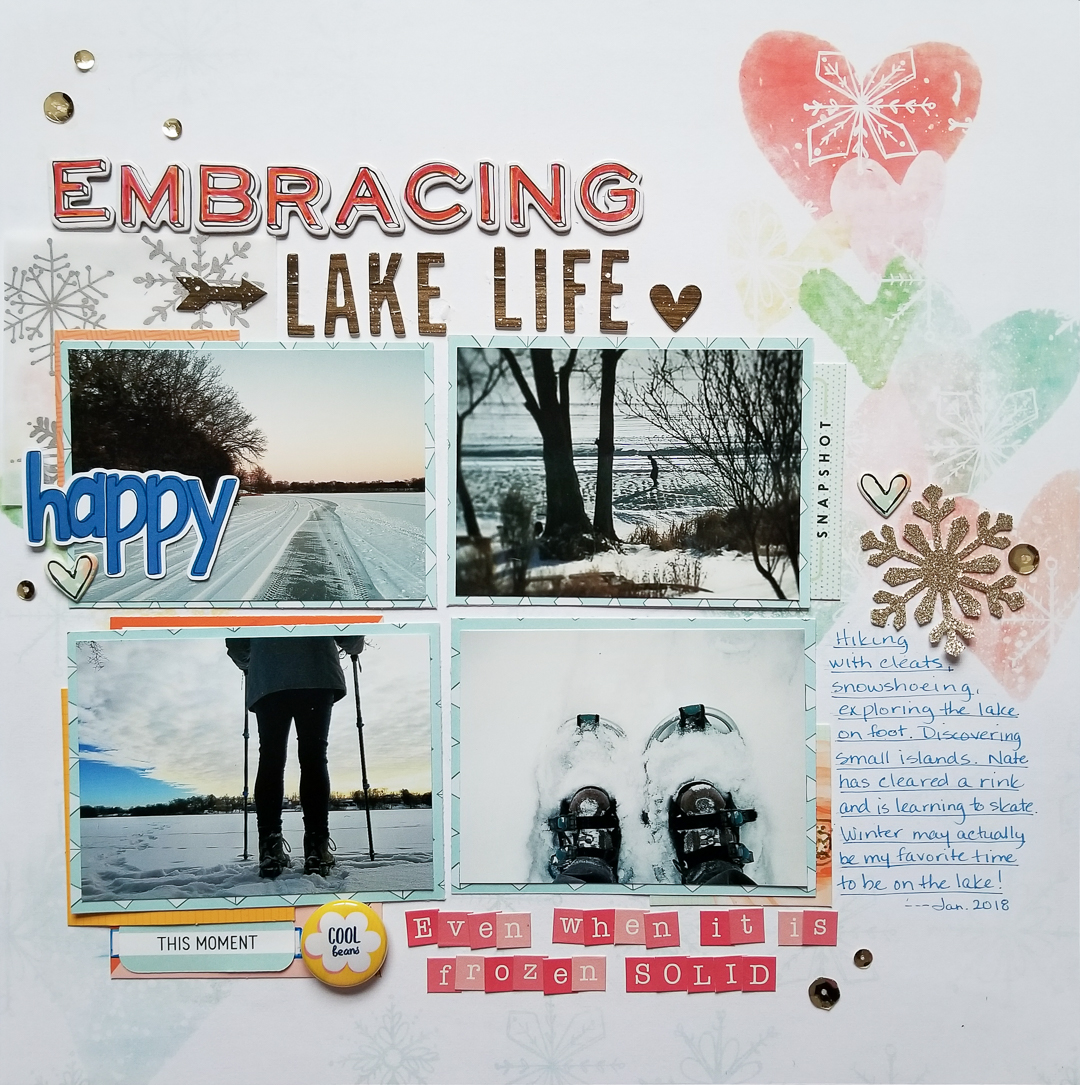 Christy Strickler says, “This past summer we remodeled our kitchen and great room. I made sure to take plenty of before-and-after photographs so I could see how much the rooms changed.”

“For this page to document this event, I wanted a design that would emphasize the differences in the two sets of photographs, so I used the 2-by-2 approach. I have two columns and two rows of patterned paper that support each set of pictures. This foundation works as it gives each photograph its own place on the page. This design leads the eye across the page, telling the story of the before and after.”

“The 2-by-2 foundation is an excellent design that I use often. I can immediately give my layout structure, but incorporate variety as I use different patterned papers on various pages.” 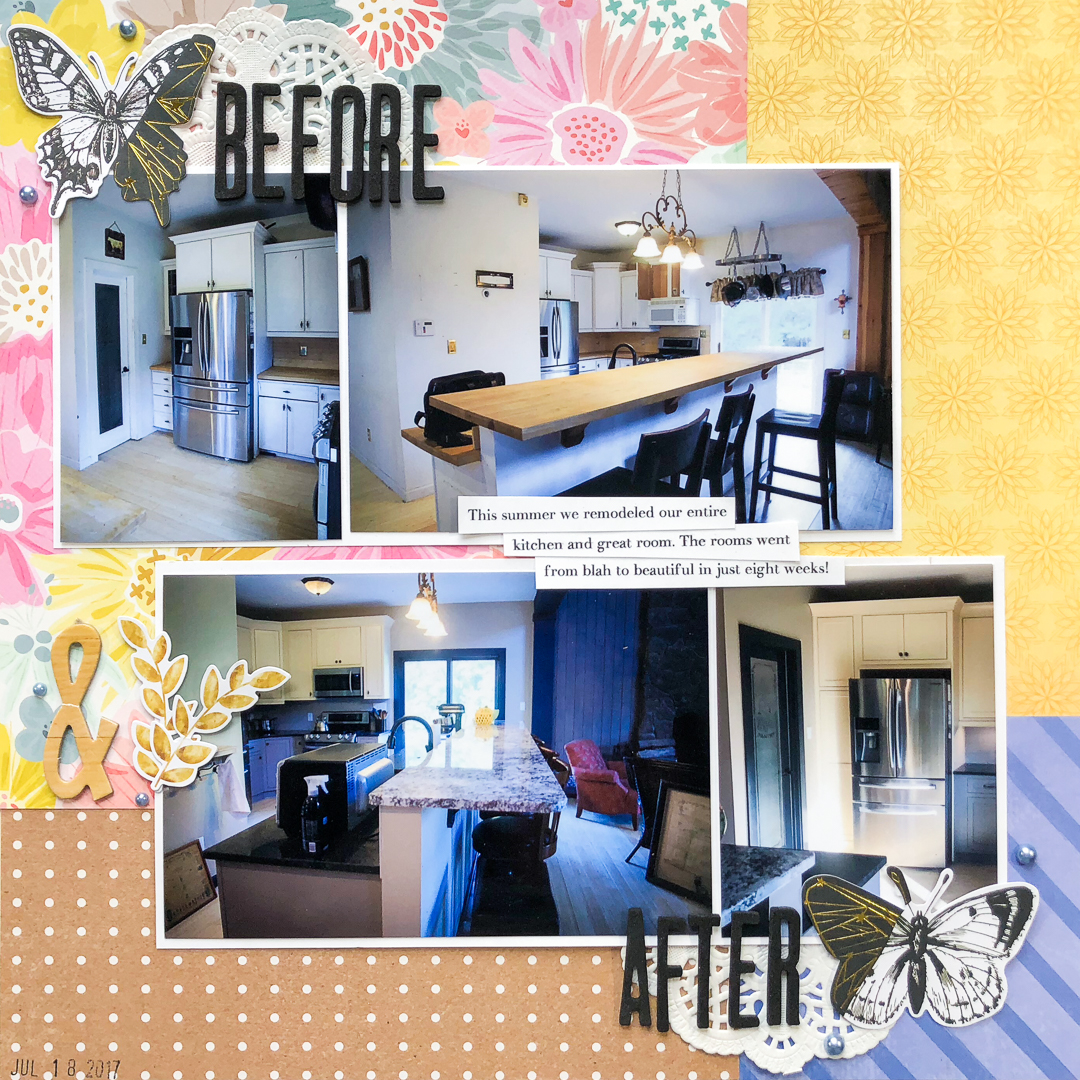 Karen Poirier-Brode says, “This story is of a happy Xmas Day of skiing. I used a 12″ x 24” double-page format because I wanted to feature a large landscape photo of my Squaw Valley view.”

“A benefit of placing a large block of patterned paper on the right is the ability it gave me to feature large embellishments as I did here.” 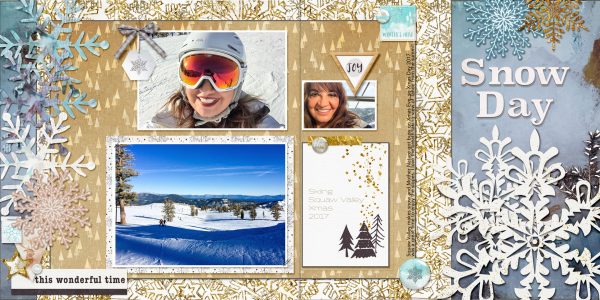