Ideas for Scrapbook Page Storytelling with an Emoji Motif 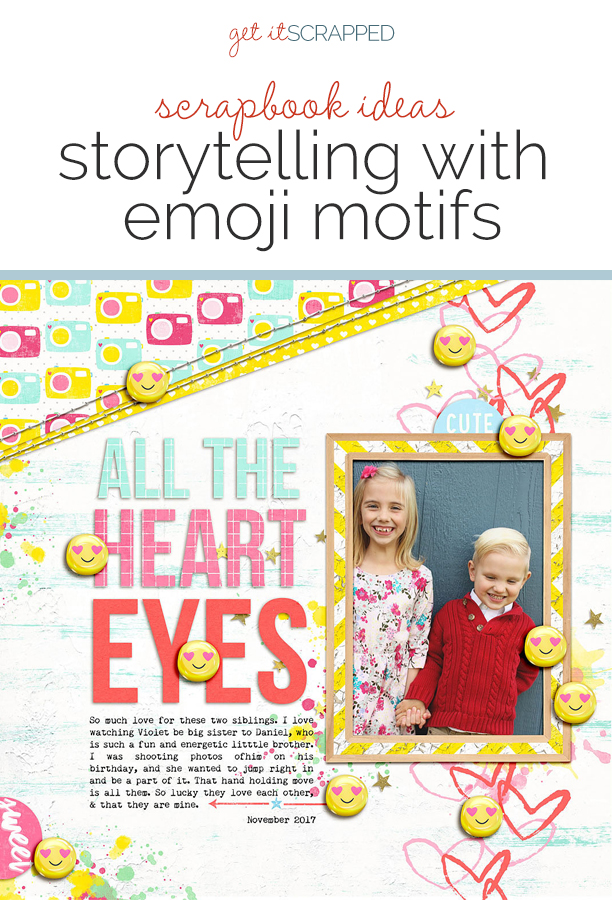 Emojis are not only a key tool for communicating online–with social media but they’ve also made their way into fashion, home décor, party supplies and more.

Emojis are a fun trend and they present a motif that can convey emotion and tell a story on the scrapbook page.

Our Creative Team shows you how they’ve using emojis on the scrapbook page.

Marie Pierre Capistran says, “This layout is about the highs and lows of our expatriate life.”

“The emoji motif is a good fit for this story, because it is a story full of emotion. When I naturally write to my friends, I add tons of emojis. It’s just part of my writing style and I was happy to carry my ‘modern’ way of writing onto a layout. I used small emoji stickers at the end of my sentences as I would use them if I were writing to a friend.” 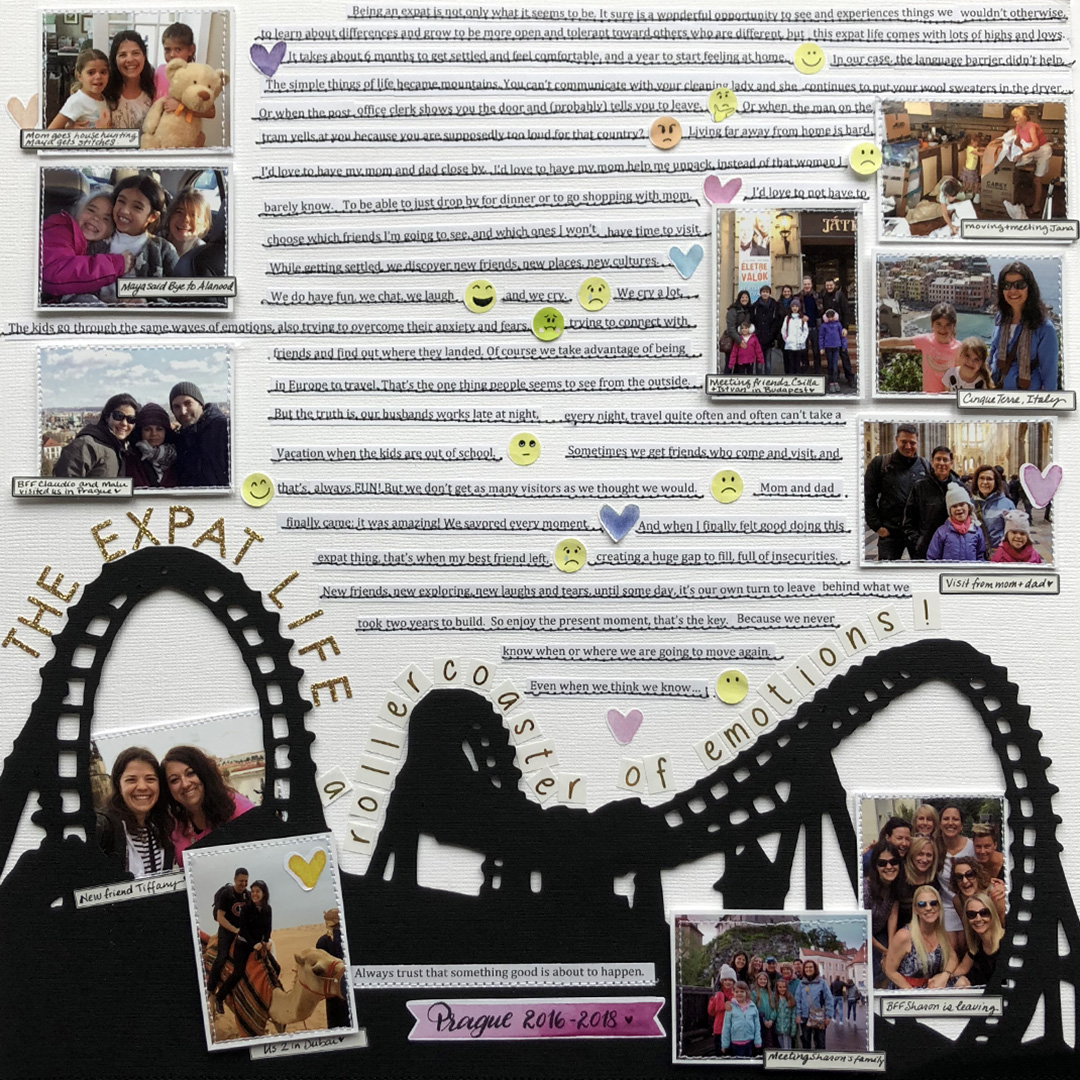 Lynnette Wilkins says, “This is the story of the sweet relationship my daughter and son have, expressed in this photo of them squeezing hands and grinning ear to ear.”

“When I saw this photo, I immediately thought of ‘heart eyes,’ one of my favorite emojis for expressing love and adoration. ‘Heart eyes’ expresses how I feel about this photo and about how these two love each other.”

“As you can see, I went a little crazy with the emojis! First I went for a big, bold title that references the emoji itself, and then I scattered a bunch of them all over the page. Both these approaches let the viewer know the love I have for this is something I feel strongly and passionately. Very emoji-onal!” 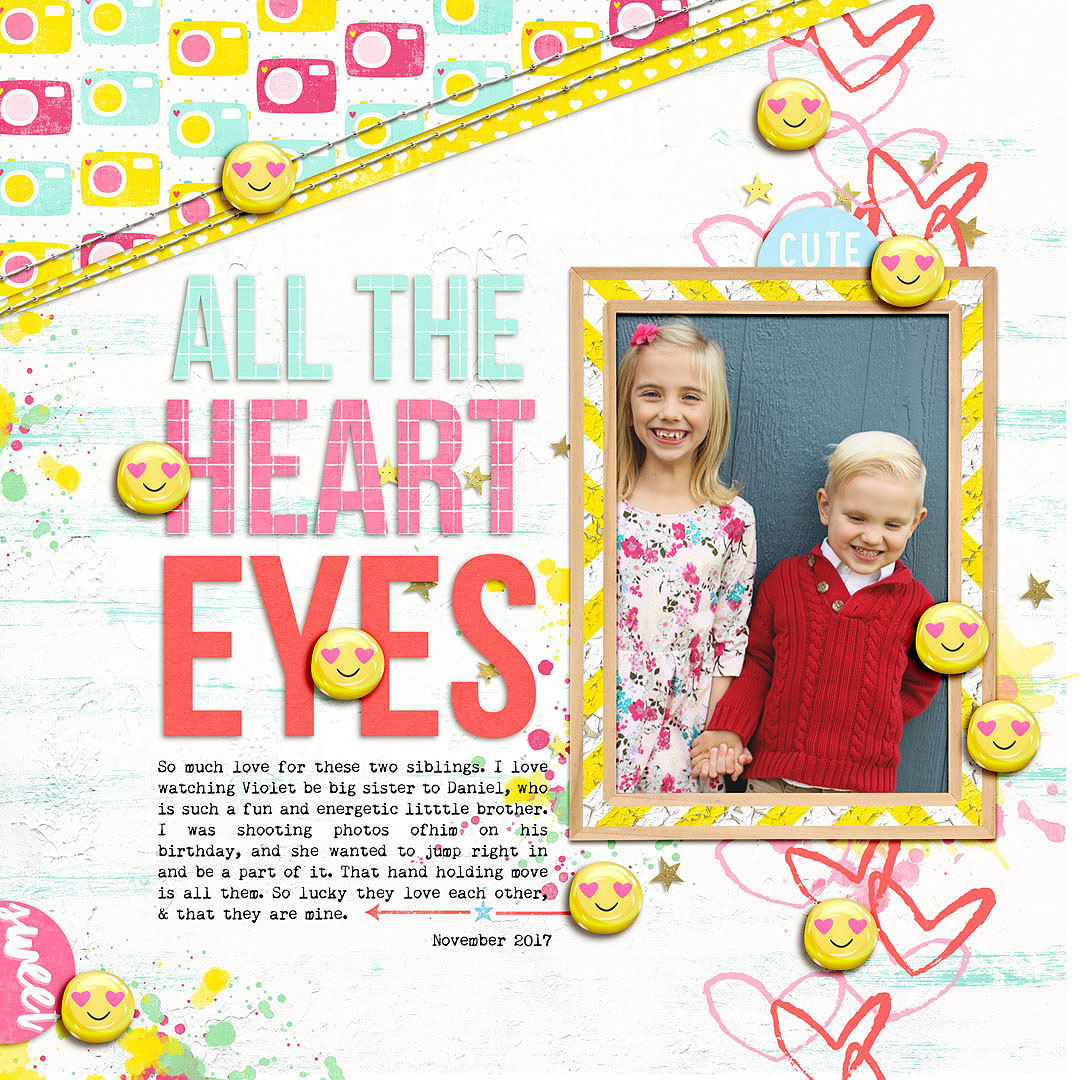 Iris Fox says, “With this layout I wanted to comparatively document the differences between being a teenager now and being a teen in the late 80s/early 90s. I found a photo of myself and one of my daughter, both looking petulantly at the camera. My title, from the famous Nirvana song, is a bridge of sorts between the two eras. Teenhood looks a lot different in 20+ years, but the teen attitude never changes!

“Emojis are everywhere. We see them in clothing, home items, scrapbook and stationery supplies. Emojis are the new way of communicating. My daughter has grown up in the digital age, never really knowning a time without them. When I was a teen, we got our first personal computer, running MS DOS. There wasn’t even an operating system as we know it, just a black screen with lines of commands. The word ’emoji’ hadn’t even been invented. They were perfect to show the stark contrasts between our two teen worlds.”

“The page is loosely divided in two halves, the ‘Now’ thought and speech bubbles and the ”Then bubbles. Emoji are exclusively on the the left ‘Now’ side. (Although I did add a smiley faced sun on the T’hen’ side because we did have smileys!) All those emoji with other trendy icons on one side give a picture of what consumes the teen mind in the digital age – things like selfies, iPhones, texting – while the other side shows icons of the analog things that influenced me – books, music on cassette tapes, wind up alarm clocks.” 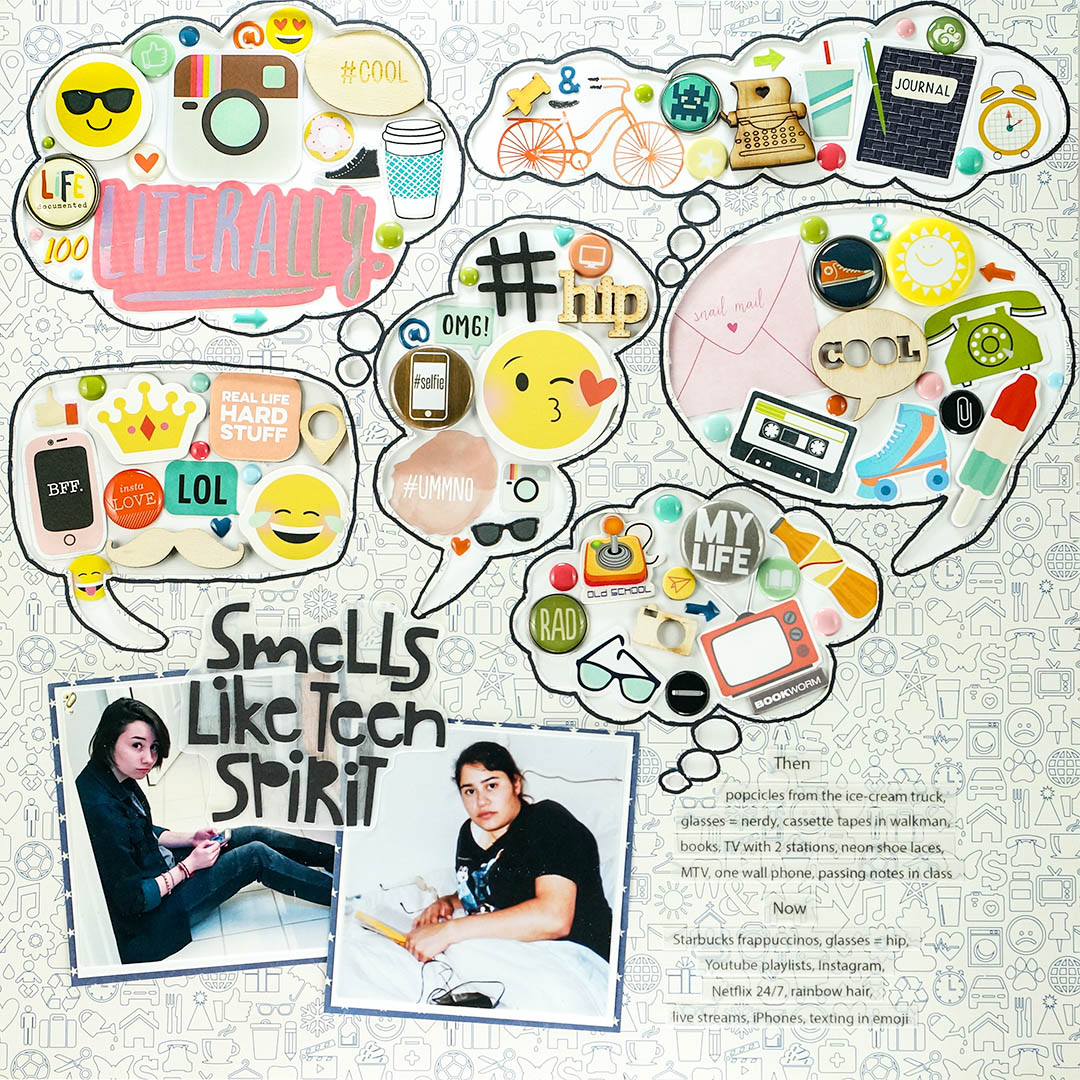 Dawn Farias says, “This story is about my daughter and some of her emoji-themed thingamabobs. However, it’s also about this stage in her life when she’s trying out new things and figuring her place in the world.”

“The emoji motif was a good fit for my story because it gave me a literal reason to scrapbook photos of her with her emoji stuff, which I think is so cute and fun about her. I used a large emoji heart eyes face to complete the LOL title for the page. This gives a light-hearted and fun feel to things. As a creative tip, this is a digital page and I used the custom shape tools for the circle and eyes and the pen tool to create the smiling mouth.” 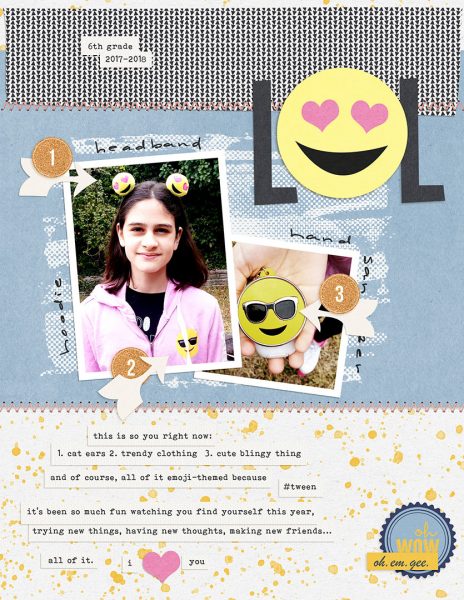 LOL by Dawn Farias | Supplies: Papers, word stickers, cork numbers, paint from Go Bananas kit; arrows from All Boy kit; L from Cork It alpha with a black paper clipped to it; white journaling paper from Looking Sharp alpha – all from Dawn by Design; stitches from Before Stitches by Creashens; all at The Digital Press; font is Bohemian Typewriter from dafont.com

Devra Hunt says, “The real story here is not that the story is about this emoji, or that it started as a family joke, or that it is now the emoji that my friends associate with me. So much so, that they send me all the things they can find. This emoji has mainstreamed the word that it represents. Kids think it’s funny, while adults use it as it’s meant to be. It’s even being used as a term of empowerment.”

“I used the emoji herel as a literal representation of the story and photo and to convey the humor my family and I have enjoyed. The title itself is funny but also a play on parts of my story.” 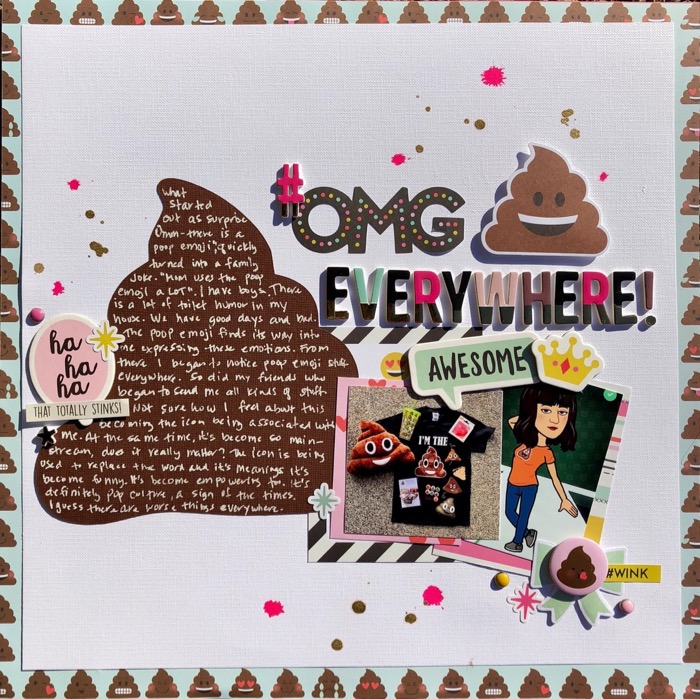 Hannah Lemieux says, “The story of this page is a series of silly faces that my son will make when we are taking his photo. This is a common occurence when photo taking with him. He is always making silly faces and i really want to document this part of his fun and silly personality.”

“I thought the emoji motif was perfect for this layout and story because I associate emojis with fun and silliness. I wanted it to fit the light hearted feel of the photos.”

“I also wanted to make sure I used emojis in a way that went with my story, and make them feel like they fit, even though in my pictures that was no emojis at all. By using a cutfile that had emojis in the circle areas, I could add the them in a fun and playful way. I also used lots of stickers that had emjois as embellishing pieces to link it all together. I think they worked well with the flow and playfulness of my son’s goofiness.” 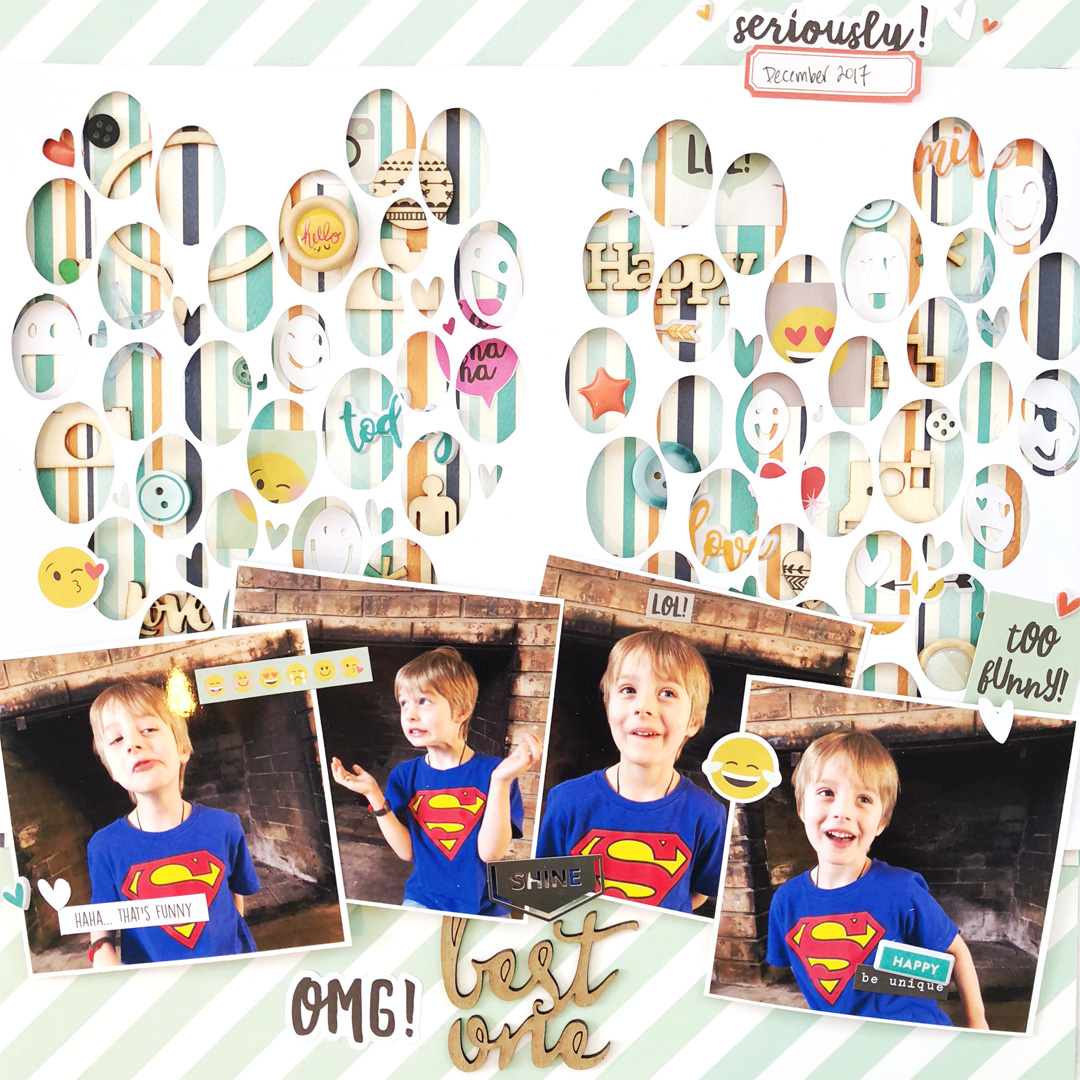