Use Design Elements to Reveal Character in Your Scrapbook Page Stories 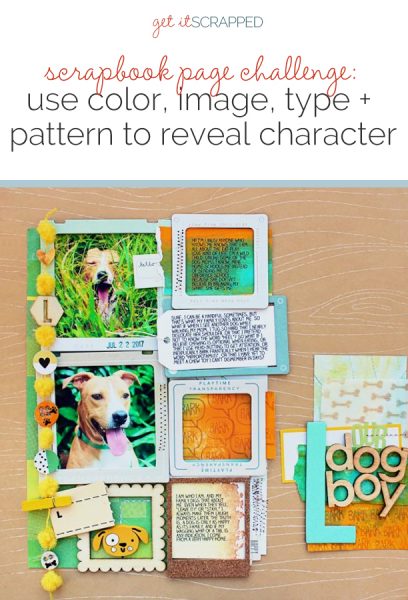 In this piece we’re focusing on character and showing you how to use select tools–color, image and type–to put character front and center on your page.

Nicole Mackin says, “The main character of this layout is my youngest daughter, Mallory. It is not about a specific story but about some specifics about her right now.”

“Because I wanted the page to reflect my daughter’s personality, I used multiple elements to symbolize who she is. These included:

“Some elements are literal: the music notes are included because she loves music and loves to sing.”

“Some elements are more symbolic: for instance the unicorn washi tape is used because she has an interest in the magical and unknown.”

“There is an eclectic feel to the layout because that represents her. She can be a silly goofball one second, then hand us a test with a 100% at the top. She is always surprising us, yet keeping us on our toes!” 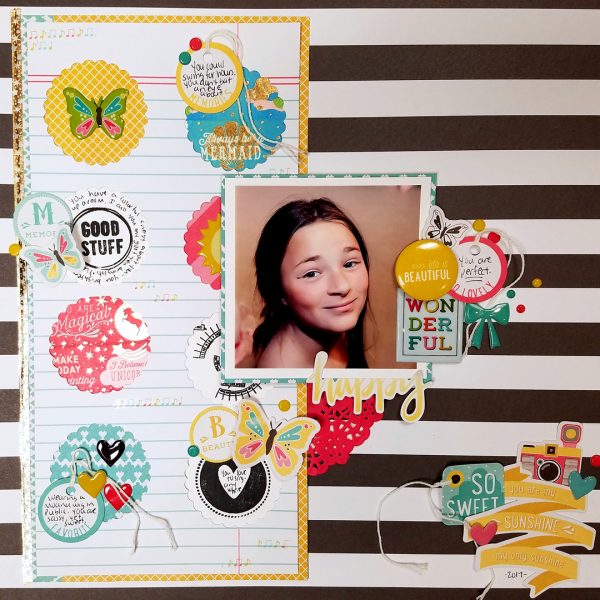 Jana Oliveira says, “My family made a trip to Vancouver, Canada. Visiting Stanley Park we found out they had a steam engine. It was a little one, but my son really loves trains. He was so happy in his way, paying attention and enjoying and feeling every minute of the ride inside the park. It was a very peaceful ride.”

“Stars have huge symbolism to me. I use them when thinking about revealing character. Nothing to me makes more sense for my son’s stories because he is a star fighting everyday in a place that doesn’t accept him well. He is happy despite it all. He really enjoys himself and is a happy child. With the stars, I combined bright colorful elements, like paints, stamps, scribbles all tied together to the happy vibe of the page.” 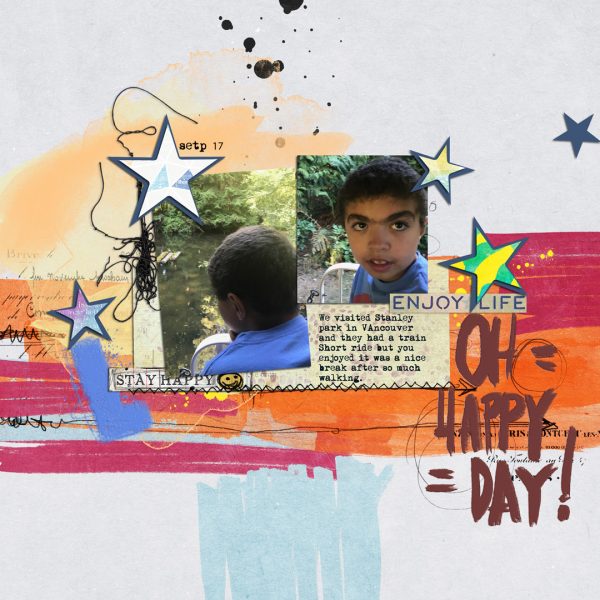 Jill Sprott says, “In order to capture the character of the biggest character I know–my dog-boy Linus–I set out to create a page in which all of the elements converge to convey his personality: the pair of images reflect his sweetness and his silliness, as does the journaling, which is in his voice.”

“What better way to capture character than to let the subject of the page do the talking? Because Linus smells of dirt and grass and loves cuddling, I combined warm and earthy colors and patterns, even creating some patterns of my own using stamps. Every aspect of this page reflects his eat-play-love philosophy of life.” 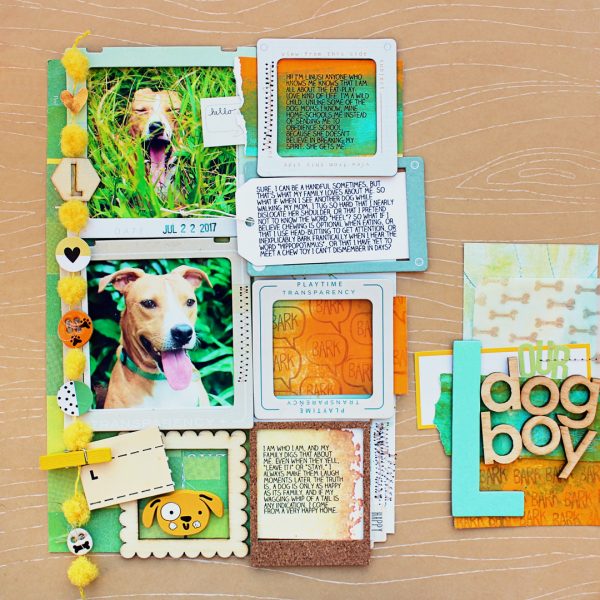 Stefanie Semple says, “It is a year since our cat Shadow broke his shoulder blade, and this layout reflects my daughter’s relationship with him now.”

“I worked with a color palette that reflects Shadow’s coloring and blue to represent his gender. The use of hearts indicates their affection for each other. The addition of the flowers and pops of pink show my daughter’s feminine qualities. I even chose one of the fonts for its playfulness.” 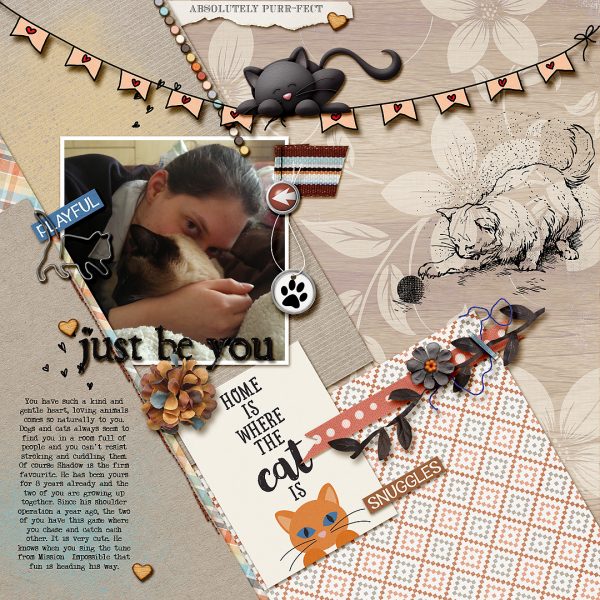 Christy Strickler says, “Our new kitten came to us unsocialized, sweet and cuddly but sometimes playing too hard, with a bit of biting and scratching. My son joked about how she was like a sour patch kid: sour and then sweet.”

“I designed the page to be half-and-half, solid color for her sweet side and a playful print to represent her sour side. It is cut on a triangle which represents change. I used tart shades of pastel orange, greenish-yellow and light green to represent the sour. Flowers softened the page and added a feminine touch to represent that she was a girl. I used citrus slices to represent her sour and sweet sides. They are wood veneer which adds a touch of warmth for she is quite a cuddly kitten despite her sour moments.The cursive title adds another soft touch while alternating with the smaller, hard font in the word ‘and.’ The photos are placed askew to represent her silly side.” 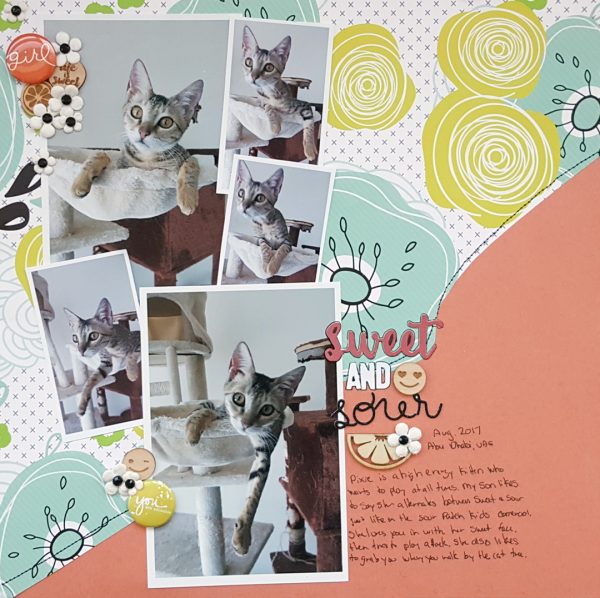 Ronnie Crowley says, “My daughter’s finance got his Aggie Ring recently so my page records what this means to them both. As he is in the Corp of Cadets at Texas A&M and was in his uniform, I wanted to reflect the masculinity of the day–especially since it was very different from the day when my daughter got her ring last year. I used patterned papers with a military feel to them, limited embellishments to a traditional gold star, and then selected alphas to complete the simple masculine look I was trying to achieve.” 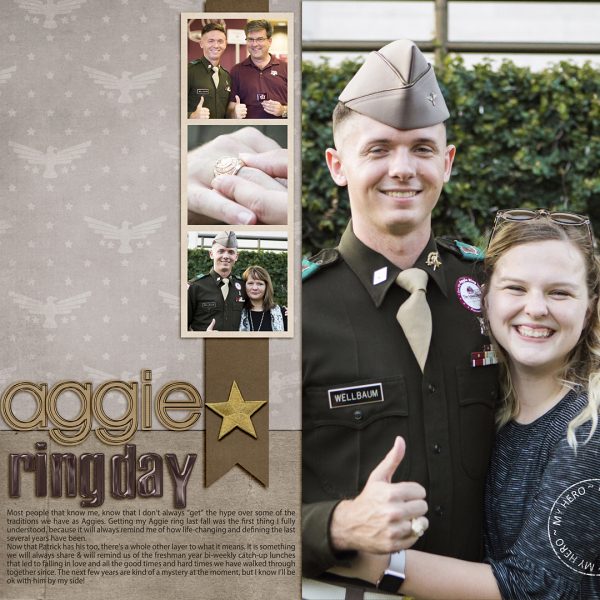