Scrapbook Ideas for Using Bold Tribal Patterns on Your Pages 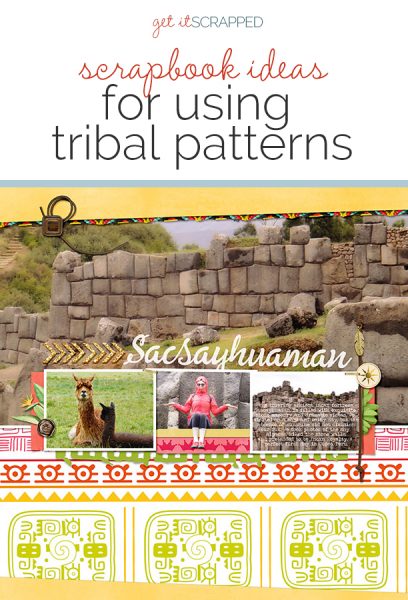 “Tribal” or “ethnic” patterns derived from the visual art of Native American, African, Pacific Island and other indigenous cultures have become popular in modern day dress, interiors and even scrapbooking supplies.

These patterns include: batiks (India), shibori (Japan), tapas (Fiji), ganado (Navajo), kente (Ghana) and more. See how our Creative Team has used these patterns on their scrapbook pages. And check out our PATTERN: TRIBAL pinboard over on Pinterest for more inspiration.

Lynn Grieveson says, “This page is about the new wooden deck we had built at our place, and the outdoor furniture which was quickly taken over by the cat!”

“I wanted to tell the story but the photos themselves weren’t that inspiring. So the tribal patterns worked because they fitted with the theme of wood and nature but at the same time the warm colors in the patterned papers brought out the colors in the photos.”

“The yellow base paper is reminiscent of woven matting used by Pasifika people, more of whom live in Auckland (where we living at the time) than anywhere else in the world. It also reminded me of the matting common in porches and sunrooms. I was worried that the other patterned papers might overwhelm the photos, but using them along the side and under the title meant they simply added interest to the page.” 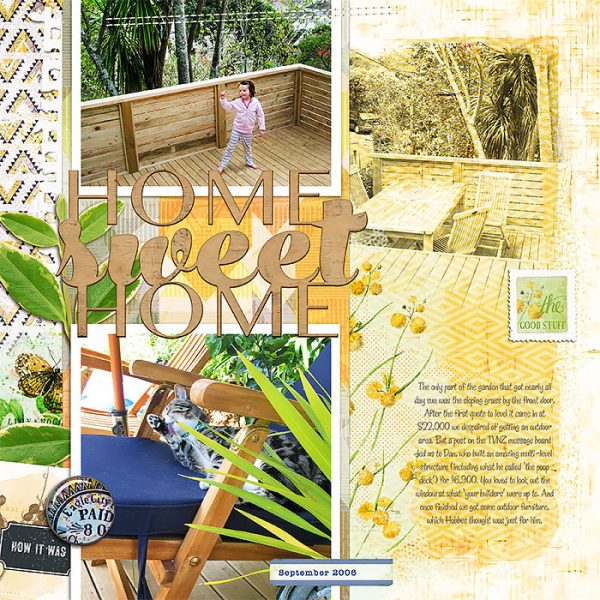 Kristy T. says, “This page documents the native wildlife–including our sighting of this echidna–that we saw on our holiday in Exmouth. ”

“I was inspired by Aboriginal dot paintings, which are often patterns created with different colours of dots.  These paintings sometimes represent a journey, so this suited my documentation of this part of our holiday as the wildlife is native, and we had travelled for our holiday.”

“I visualised how I wanted to use the dot patterns to move the eye around the page before I started, so I didn’t have trouble using the pattern. I created my dots using a cotton tip. Looking at examples is a great way to start to see the possibilities for using the tribal pattern.   I started my page by thinking about where I wanted to place my photograph as it would be the focal point of the page and then created one series of dots, then adding to the design making sure that the pattern lead to my focal point.” 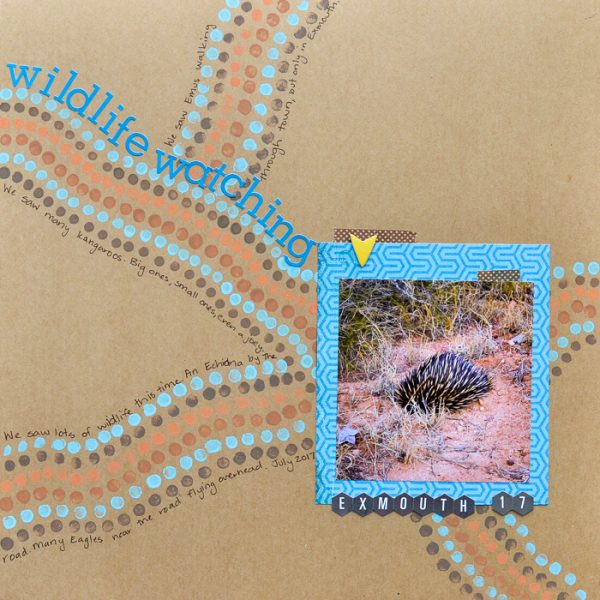 Deborah Wagner says, “When my sister, my niece and I traveled to Peru, we visited Sacsayhuaman (pronounced “Sexy-Woman”). Because Sacsayhuaman is one of the most stunning complexes built in Inca times, the tribal patterns were a perfect complement for my photos.” 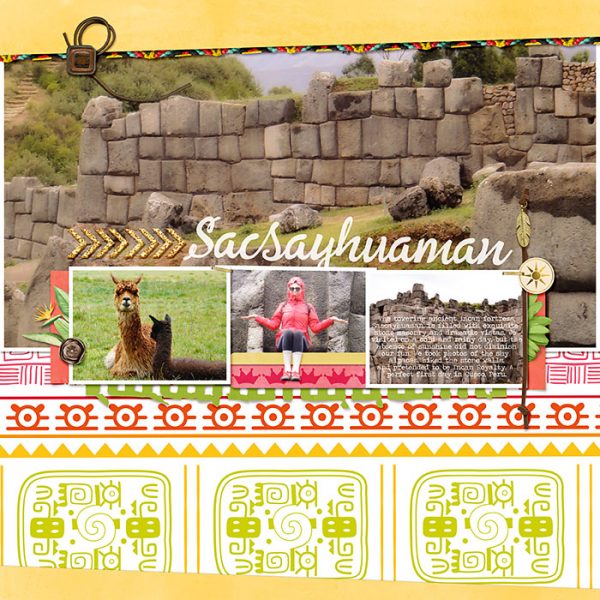 Stefanie Semple says, “This layout showcases one of the few photos from my early childhood in South Africa. It tells the story of my roots and expresses the way I felt I was split between my German family and my South African one. I was born in Germany and yet my heart and way of thinking was more influenced by my South African mother and extended family.”

“Tribal patterns reflect the idea of roots and heritage. I used triangular shapes and patterns that echo the African tribal patterns and express the multiple facets of my upbringing. I limited the number of colors I included, allowing one feather to add colors and small bits of a variety of patterns while choosing the wood grain background to act as a neutral. The large wooden accents add dimension and contrast with the small patterned paper motifs.” 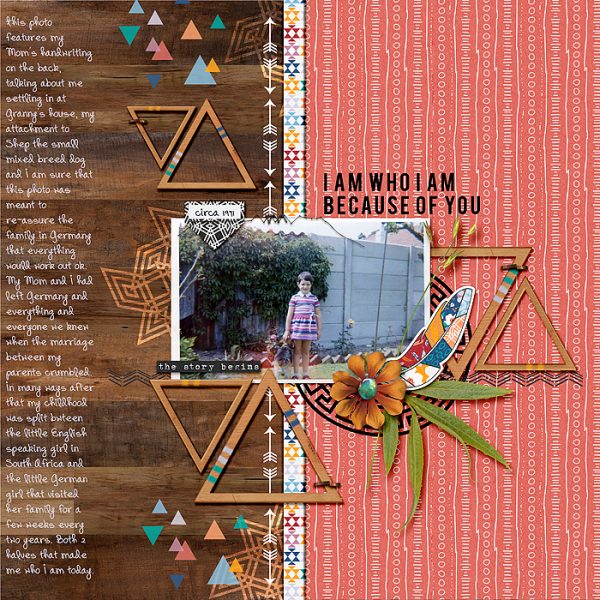 I Am Who I Am Because of You by Stefanie Semple | Supplies: Amber LaBau: My Tribe kit.

Meggan Blethen says, “My husband went to Fiji after he graduated high school. He took this gorgeous photo while he was there.”

“Since the photo is from Fiji, I thought using a fun tribal pattern like you see the white cut file behind the photo was perfect. The shapes It remind me of the foreign and different scenery you can find in Fiji, compared to home in the US. At first I wanted to use the cut file pattern as a whole piece to show it off, but as I continued working on the layout it didn’t look right. Cutting the piece apart and using it as a foundation for the photo helped draw the eye to this central focal point.” 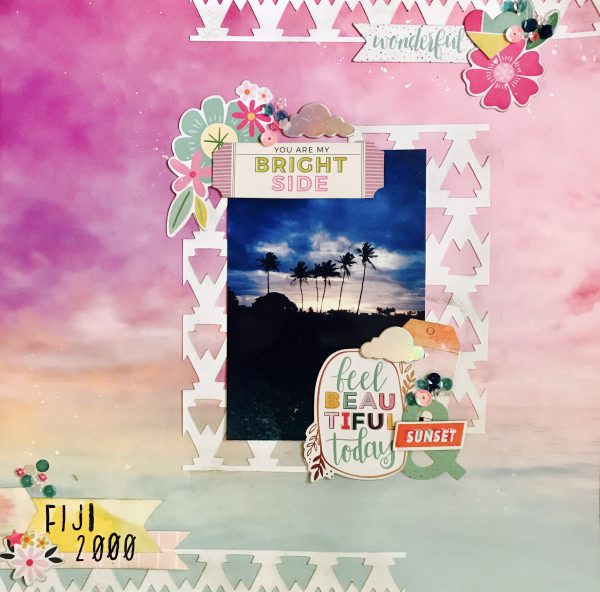