Scrapbook Ideas for Using 360 Degree Photography to Tell Your Stories | Page Guide No. 12 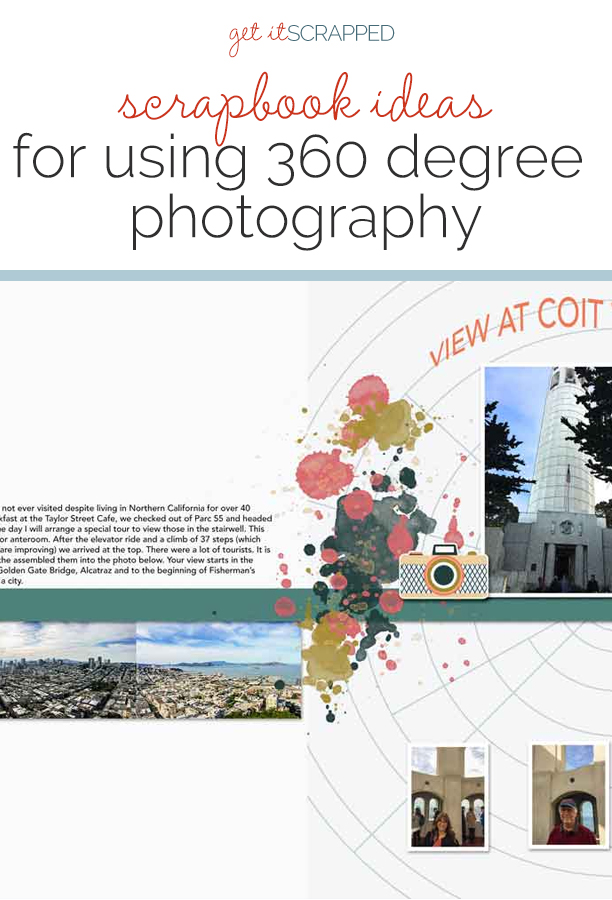 Thanks to advances in technology for photography as well as the many apps available, we can do amazing things with our photos and capture life in new ways.

One of those new ways is 360 photography, popular in real estate marketing, tourism and news. Here our Creative Team tells you how and why they took their own 360 degree photos–and how they scrapbooked them. 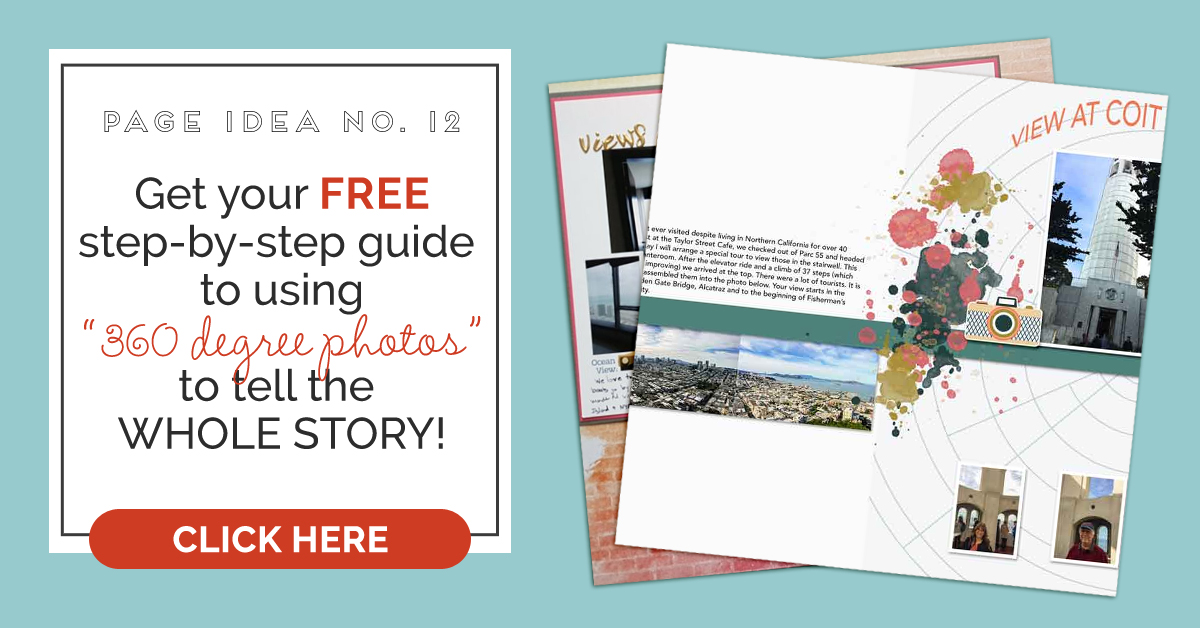 Christy Strickler says, “If you stand in the center of our apartment, you can see 3 different views: the ocean, the mangroves, and the city. To capture this, I used a panorama/360 degree photo mode on my Samsung Galaxy phone. The glare from the sun prevented the camera from seeing out the windows, so I also shot a view from each room. I used Photoshop elements to make a photo collage. I made the 360 degree photo the largest, then added in small photos with the views from each room. I used embellishments to point to each prospective room, reinforcing the idea that the view belonged to it.” 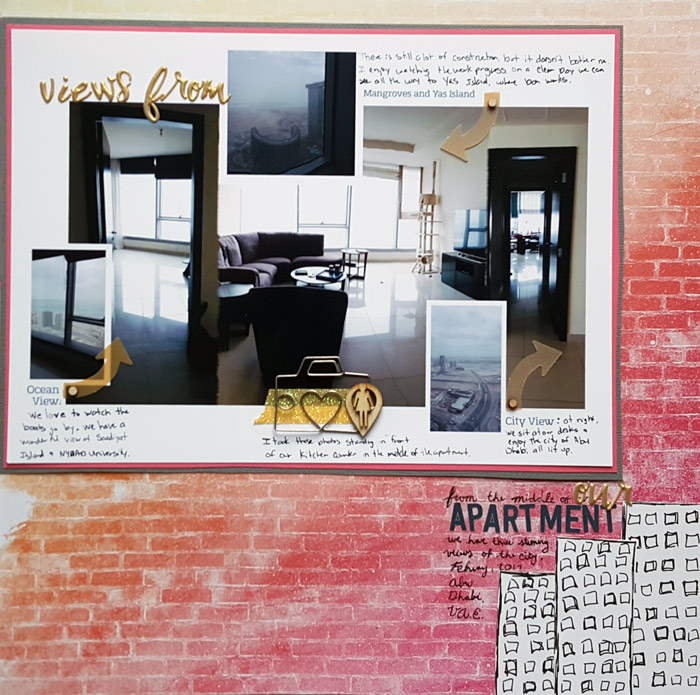 Karen Poirer-Brode says, “Coit Tower gave me the perfect opportunity to take a 360-degree photo. I went to every open window and took an i-Phone panorama at each. I did the best I could with many tourists all wanting to shoot pictures. Still, the images worked together quite well. I imported them into Photoshop and lined up and overlapped the photos making slight size adjustments. I then cropped the image into an even rectangle. I edited the result as a unit and did not try to obscure the fact this was a composite photo. This layout uses few (for me) embellishments. The right vertical edge of the mural images helps balance the strong horizontal lines of the text, the cardstock strip and the 360-degree picture on the left. I used the text-on-a-path tool with my title to reinforce the circular feel of the panorama and the tower.” 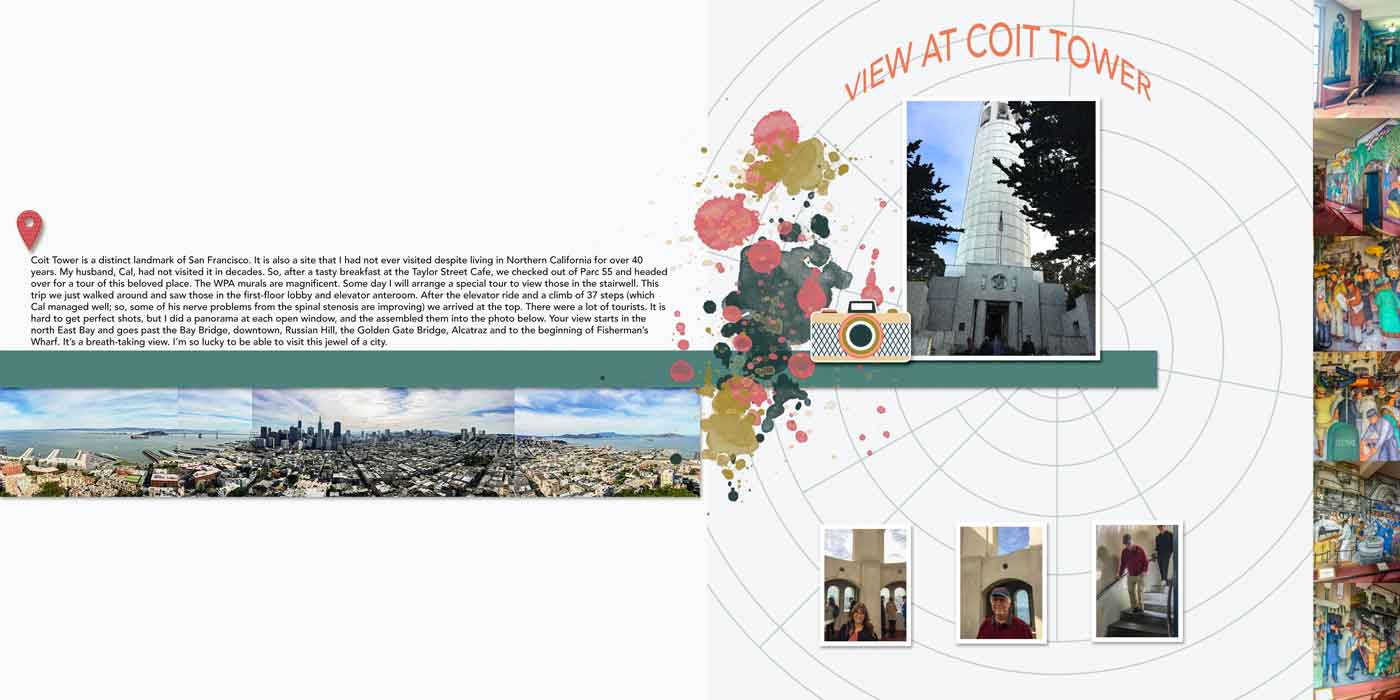 Kristy T. says, “This page celebrates the fun my kids have when they get together with their cousins.”

“To capture my 360 degree photo I used the 360 Camera App by Occipital.  I found the app easy to use but it does take a little practice to get a good result.  My photo isn’t perfect but works well anyway.  It is best to try to keep the horizon level as you take your series of photos and try to make sure people aren’t moving when you take the photograph (although you could use that to your advantage as a creative choice to show movement).  The app has a grid that helps you take the photos.”

TIP: Be mindful of where you begin taking your photograph as this will determine the exposure for the entire photograph i.e. if you start in the shadows you may blow out the highlights completely and end up with large sections that are white.”

“The original photograph was cropped and printed on a A4 sheet of paper, with the journaling written directly onto the photo paper.  I used the same photograph three times to give emphasis and to create a simple design with a lot of impact.  I used a basic band foundation, large title and minimal embellishments to keep the focus on the photograph and encourage the viewer to look ‘into’ the photograph.” 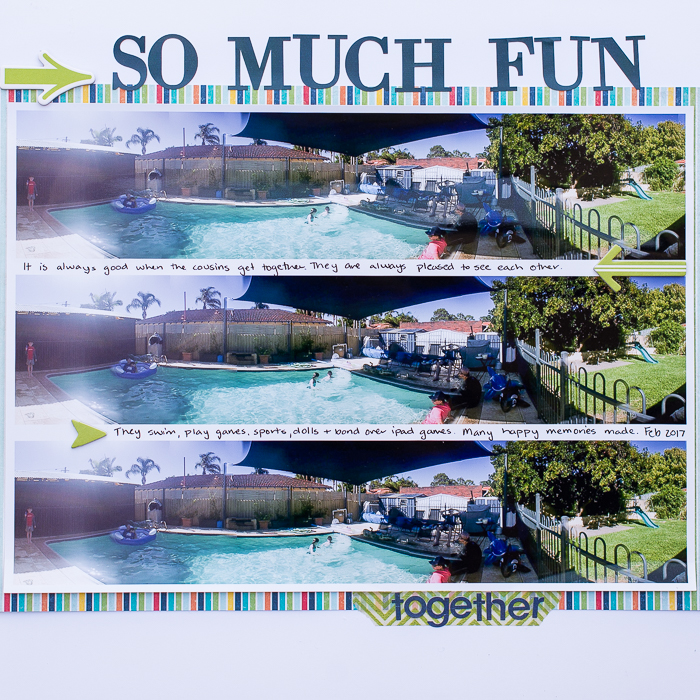 Marcia Fortunato says, “I recently hiked in a state park near me, one that I hadn’t visited in awhile. Along the trail there is an overlook and I stopped there to take a 360° photo to capture all that was around me. I used the Virtual Mode available on my Samsung Galaxy S5 phone camera. Using this feature I took a series of photos as it guided me around in a circle. The phone then combined the photos into a type of video to show the entire 360° scene.”

“Taking the photos was easy, but incorporating them into a scrapbook page was a bit trickier since there is no easy way to print out the individual photos I took. What I finally figured out was that I could snap a series of screenshots on my phone while I reviewed the photo, and I was then able to print out the screenshots and piece them together on my layout.”

“The video that was pieced together in my app was pretty cool, but I think if I were to do this again in the future and knew that I wanted to use the photo(s) on a paper layout, I would simply take a series of individual photos to print and use on the page, and perhaps also photograph the scene using the Virtual Mode to enjoy on my screen.”