Scrapbook Ideas for Paying Tribute to Men and Women Who Serve 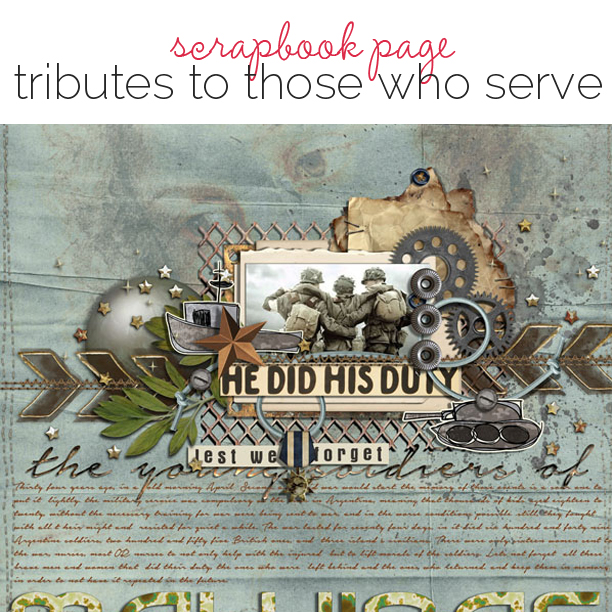 Do you have family and friends who have served your country or even your local community keeping it safe? Our Creative Team shares their pages–and offers you inspiration–for scrapbooking service men and women in the military, veterans, police officers, fire fighters, or anyone else who plays (or has played) a part in keeping their country safe.

Marcia Fortunato says, “Sitting in church Memorial Day weekend brought home the importance of the freedoms that I enjoy as an American. This page focuses on my thankfulness for the military servicemen and women who made these possible.”

“To pay tribute to the military I used an American flag, out of which I cut subway art that has words associated with the various branches of the military (using my Silhouette die cut machine). I also used vellum cutouts of soldiers and positioned them on the page in a way that symbolizes the protection of some of our rights and freedoms. I finished with stars and word bits to further support the patriotic theme.” 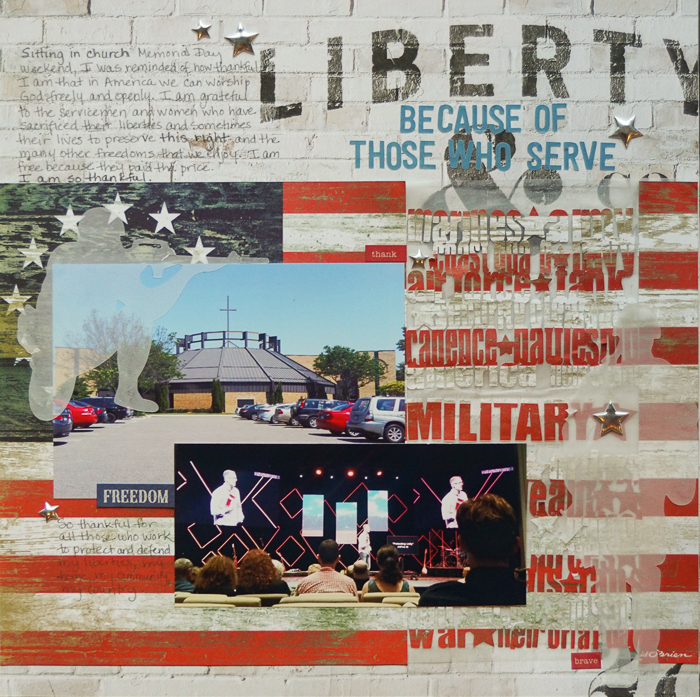 Cynthia T says, “This page is about the war over the possession of the Malvinas, better known as the Falklands. Military service at the time was compulsory in Argentina, which meant that thousands of 18 to 20 year old boys, some with no training or skills at all, were sent to fight in very hostile weather conditions (the Malvinas are almost in the south Pole).  Still, all these young men (and 16 women, nurses, taken after the war was started) fought with courage defended their country. The war lasted 74 days, taking the life of 649 Argentinians, 255 British soldiers and 3 of the Island’s civilians. This is a page specially dedicated to the very young boys who fought, the hundreds that were left behind and then returned and their families. Praying for the story never to be repeated.”

“I wanted to use mostly metals and looked for rusted or old examples. I added army green and greys and dark colors to represent a dark event. I was set to make a page with no color at all, but when I chose the burnt paper I started finding a good balance with the golden-ish/copper metal.  The lady blended in the back gives me the idea of looking back (and she has a sad look)  I wanted the page not to be neat, as to me all events of this kind are anything but clean, so I added paint splatters and the messy stitches and the darker, chunkier stitches to hold the layered frames, and paper bits with the photo. I made the alpha and then applied a style effect (using Photoshop Elements).” 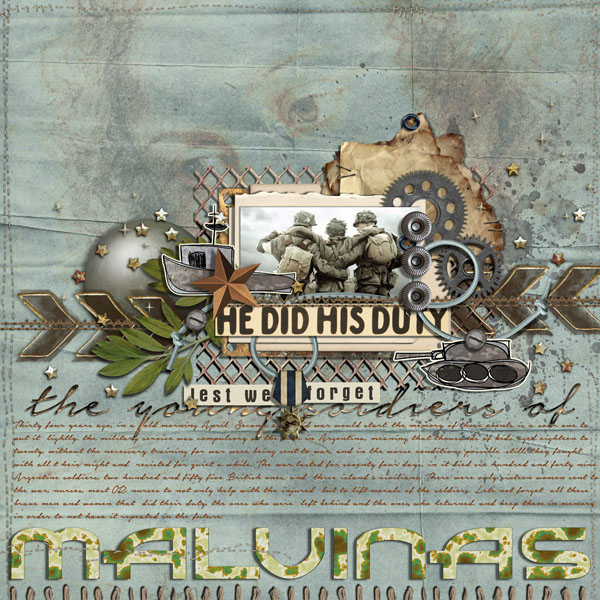 Christy Strickler says, “I wanted to document the story of how my husband’s grandfather falsified his age so that he could serve in World War II. These photos are from his paratrooper graduation booklet. I chose travel paper with airplanes  and scalloped paper with a cloud style look to represent him as a paratrooper. Since the photos are older, I gave a nod to a vintage style with the cream rosette and doily. The red, white, and blue colors are muted rather than vibrant for a vintage tone. I used alphas rendered with a traditional typeface. Wood grain elements represent his warmth and strong character.” 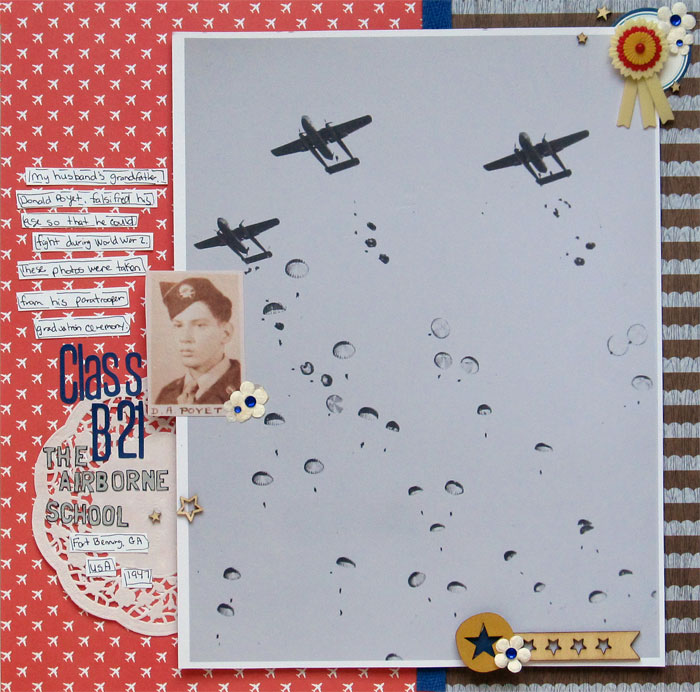 Terry Billman says, “My page ‘Blue Lives Matter’ represents the involvement of the citizens of Bee County and Bee County Law Enforcement in Texas Governor Abbott’s call for a statewide ‘Stand with Law Enforcement’ in which law enforcement officers across the state were required to turn on emergency  lights on all patrol units for one minute at 11AM, which marked the beginning of the funeral for Deputy Goforth, who lost his life in the line of duty. This page is not only a tribute to my son, who is a deputy, but to all law enforcement officers who serve and protect our community.”

“Simple framing of the focal photo, selective coloring of the Tower 1 Beeville, and blended black and white photos portray the emotionally moving experience. The blue bold title, signifying law enforcement officers,  and blue fotoglows and light leaks were used as accents to highlight the photos.” 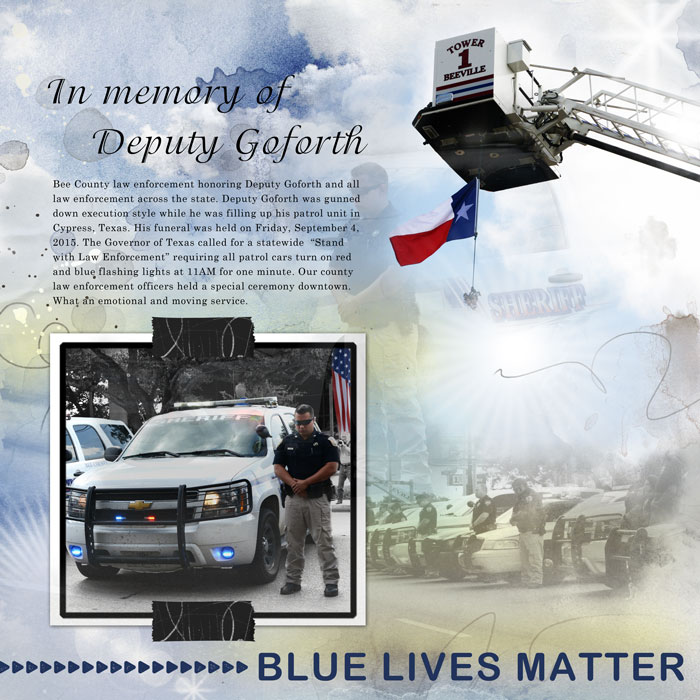 Kelly Prang says, “This is a page about my father’s service in the US Navy. He was a Corpsman (nurse) stationed with the Marines in Da Nang Vietnam with the 3rd Medical Battalion, also called Charlie Med.  His time in the Navy helped shape his future, as he came home from his enlistment and went to school to be a nurse, then continued on to become a Nurse Anesthetist. I am proud of my father and the fact that he enlisted during a time when many young men were dodging the draft.”

“I used the red, white, and blue colors, along with stars as a motif. The photo, map and orders are all pretty neutral and tended toward the bland side of the color spectrum, so I attempted to add interest with color and motif.” 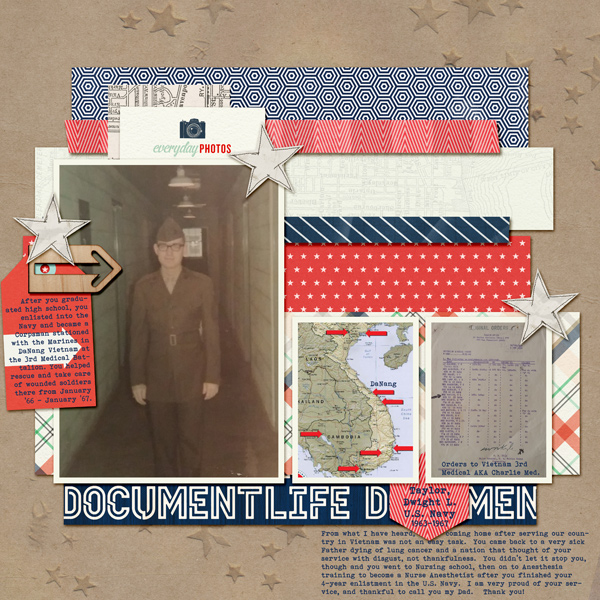 Kelly Sroka says, “This page is an expression of gratitude for all the volunteer firefighters. My husband and son are both volunteer firefighters and they spend many hours training with their department so that they can perform their duties under great pressure. When there is a fire or car accident, they have to be calm and cool in the presence of danger. Firefighters have to be ready to respond at any moment, day or night. This layout is my thank you to all of the volunteers.”

“The photograph is of my husband at a controlled burn. He and his fellow firefighters donned heavy gear and air packs that day to practice entering and exiting a burning building safely. I chose the grey background paper to represent the smoke seen in the photograph. The red and yellow patterned papers and gold lettering echo the colors found on fire trucks. The curvy ribbon below the picture represents the hoses fire fighters use. I used a brad that says “brave” and a die cut that says “everyday” because firefighters must be brave and ready every day. Finally, the dark wood dots are reminiscent of burnt wood found at fires.” 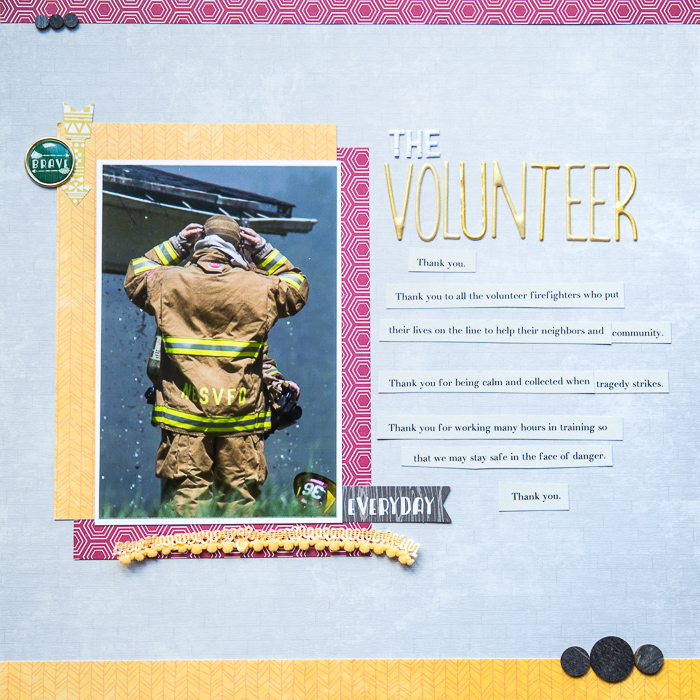