by Amy Kingsford | Design Your Story 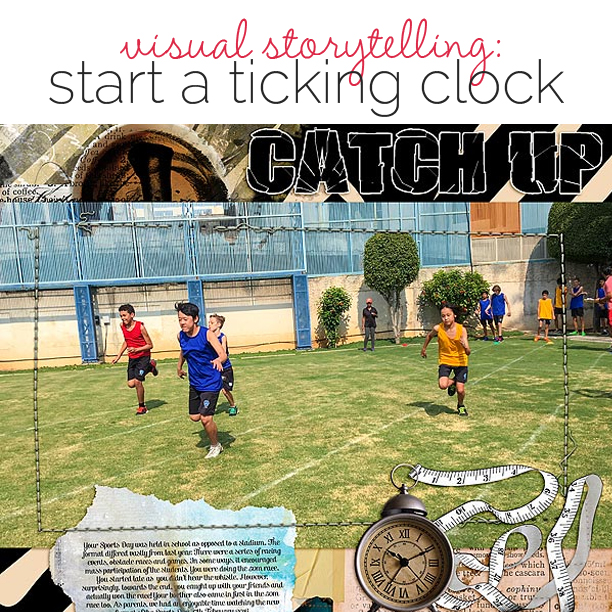 To get the sense of an epic story being told on your scrapbook page, borrow literary devices. One thing that gives a story tension and interest is a sense of time passing, of things never being the same once a moment is passed.

We challenged our team to create a sense of time passing, of a ticking clock, on their scrapbook pages.

(This is a topic we include in more detail in two GIS membership classes–Tension and StoryPlay. Click here to become a member and get immediate access to these illustrated eBooks and supporting interviews.)

Christy Strickler says, “Prior to this year, my son never expressed an interest in getting his hair styled. He got the same basic hair cut every single time. I felt a new interest in this is another sign of him maturing.”

“I used a pie chart to show how much of his life he had cared about his hairstyle and how much he had not. The patterned paper with the deer represents his younger self while the paper with the triangles represents the changing attitude. I used a mix of pastel colors with bright bold colors to show the difference in his attitude. The majority of the bright colors are clustered around the photos of him with his first chosen styled hair cut and they represent his newer trendier self while the pastels represent his younger self.I used two motifs to represent change: the butterfly and the triangle.” 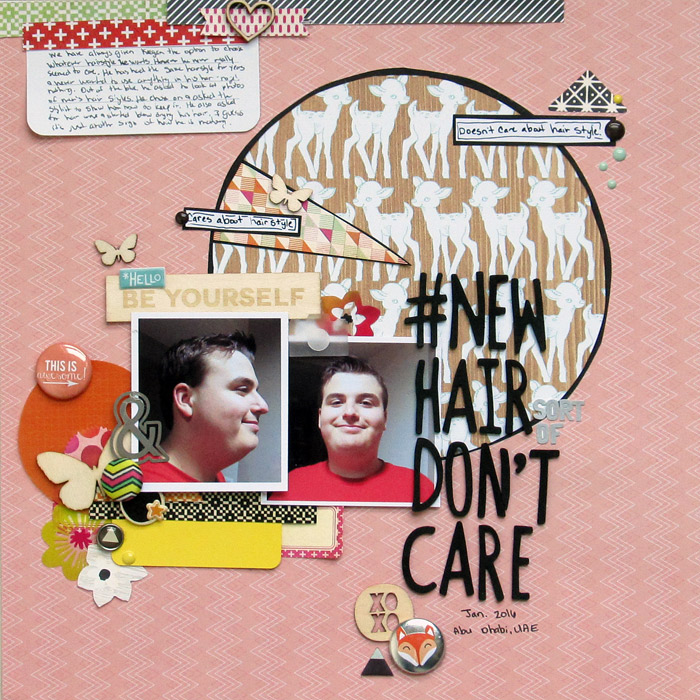 Deborah Wagner says, “This page shows my nephews playing in the ocean.”

“I wanted to remind my viewer to stay in the moment. Looking through the window, you only get a glimpse of the boys playing, and the beautiful sunset. In a minute, the scene out the window will change, and you will only have the memory. The blended clock adds another gentle reminder.” 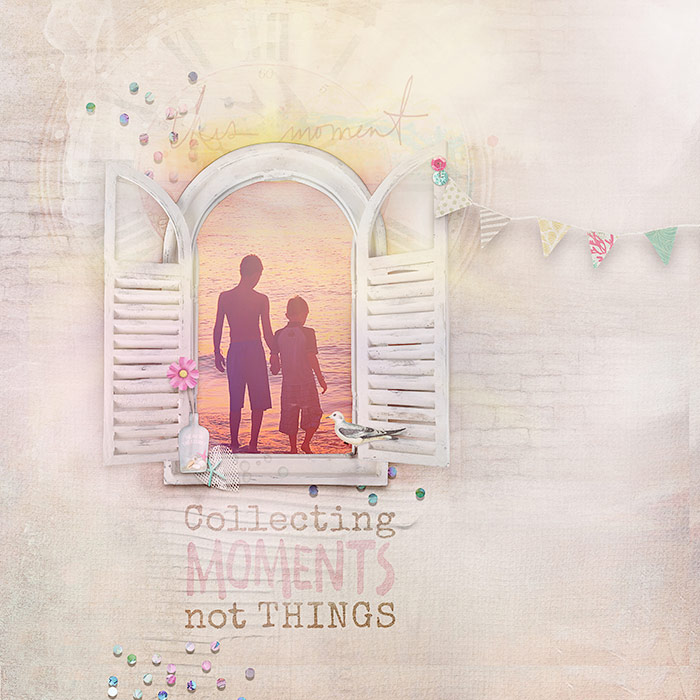 Sue Althouse says, “This page is about the trusting relationship between a mother and her young daughter.”

“The photo was taken last Halloween, but instead of a themed layout, I chose softer, vintage papers to convey nostalgia. The strips going from lower left to upper right suggest movement and progression, as does the arrow below the title. There is minimal journaling to allow the reader to enjoy the precious moment.” 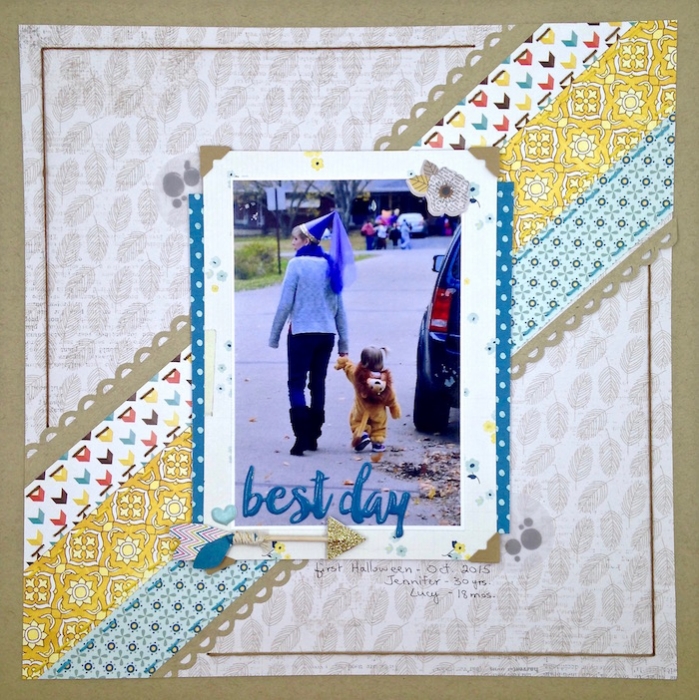 Audrey Tan says, “The story is about my son completing in a 50m race in his school’s Sports Day. He started out last as he missed the whistle but caught up and actually won the race!”

“I mimic the lines of the track to show continuity in the racing event. There are elements of time images on the page to symbolise the passing of time.” 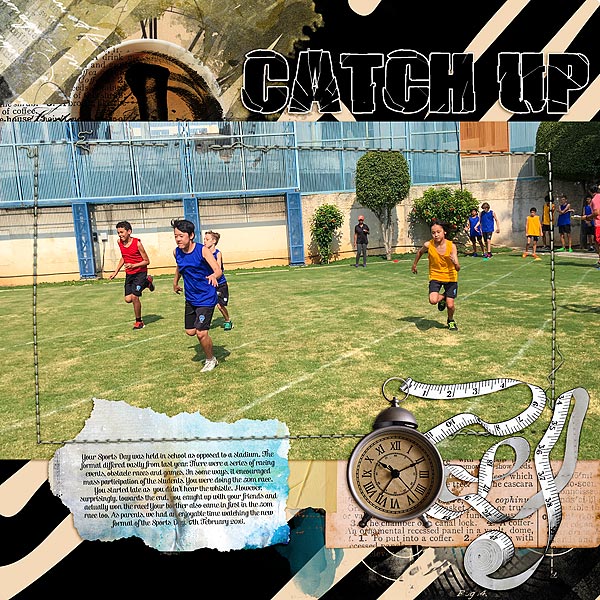 Kristy T says, “As a parent, I have moments where I wonder what my children are going to be like in the future – things like what character traits will they carry with them, what will they like and what will they do.  This page shows just one aspect of that unknown but exciting future.”

“To create the feeling of time passing I have used a question as the title, with part of the letters hanging over the edge of the blocks and the very large question mark floating at the top right corner of the page.  It gives the sense of the unknown.  I have cut the blocks to be uneven but rising towards the question mark in a unsteady pattern.  The photograph of my daughter shows her standing alongside a height chart, emphasizing that children grow and change over time. I also used white space alongside the blocks to illustrate the openness and possibilities of the future.” 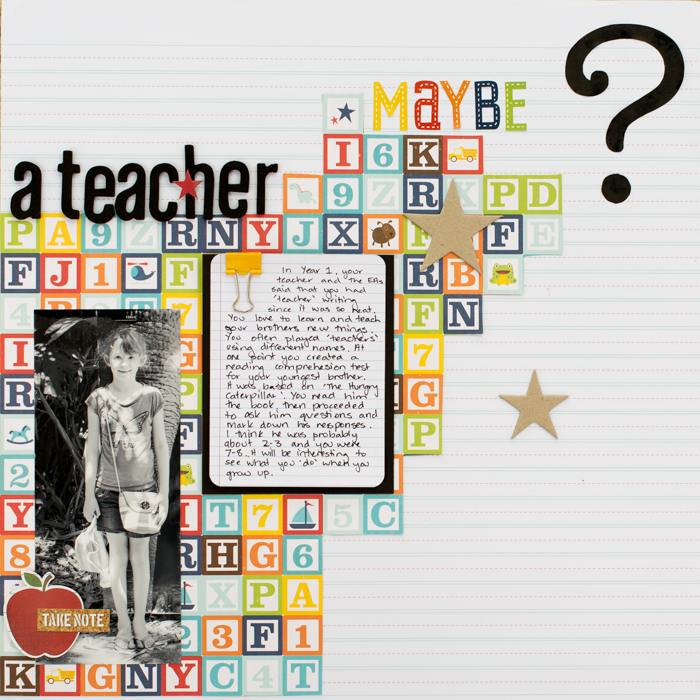 Ronnie Crowley says, “I’ve been watching my son play basketball for a long time now. Looking back at pictures it made me realise how some things have changed (his body) but other things like how he holds his mouth are the same.   I used the contrast of a black and white picture with a color picture to show the passage of time. This was supported by the elements and digital brushes I used.” 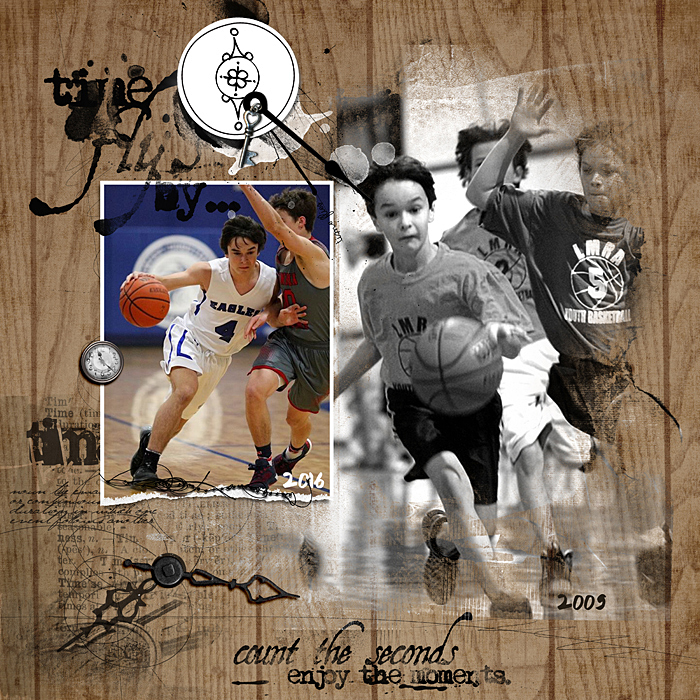