Ideas for Using Double Exposure Techniques on the Scrapbook Page 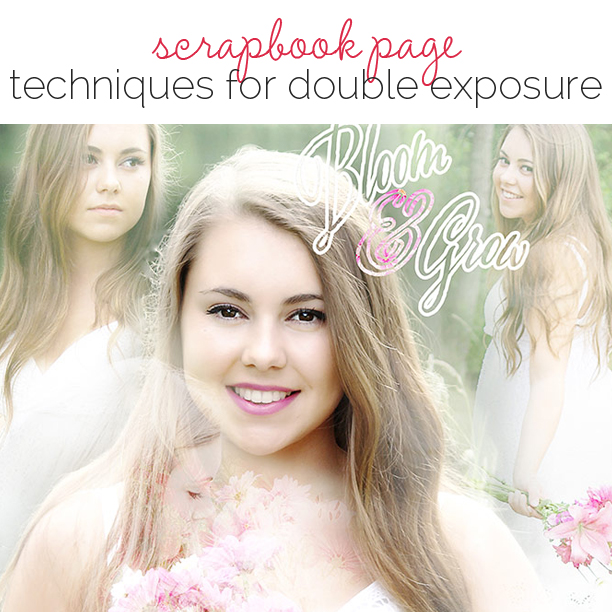 Double exposures are trendy in graphic and print design right now. See how they gave us inspiration for scrapbook page storytelling on both paper and digital pages.

Ronnie Crowley says, “My page is all about my ‘struggle’ of being English in America – even after 13 years. I record a list of things that still make me English and then the things that have changed.”

“T create a double exposure of myself and the British flag, I used a layer mask in Photoshop. I wanted to represent my English interior so clipped a photo of the flag to a mask in the shape of my extracted figure. I played with blending modes to get the final look. My creative inspiration came from The Art of the Double Exposure at  Discover Digital Photography. 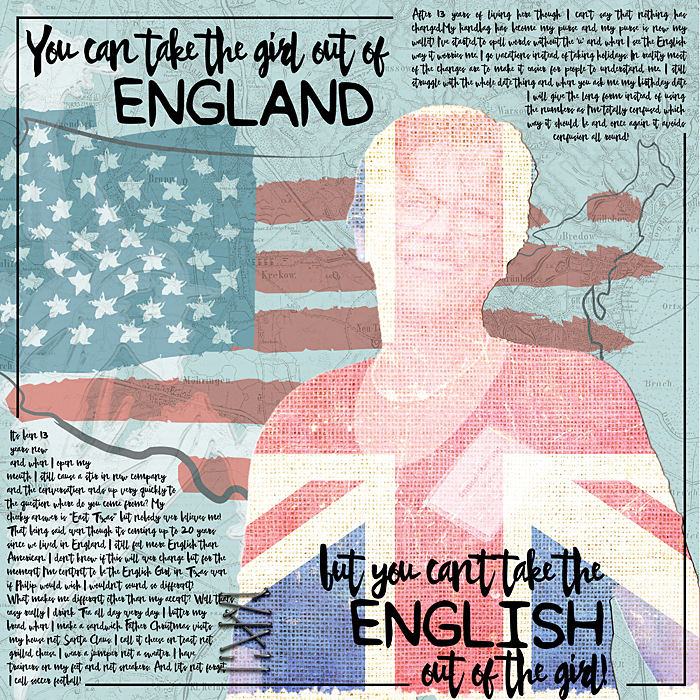 Carrie Arick says, “On this page, I told the story of my son’s surname in hidden journaling.”

“To represent the story I created a double exposure of a black and white photo of train tracks and a portrait style photo of my son. Both the photos have strong contrast individually, but they also contrast in focal length. Using the screen blending mode to keep dark areas dark and light areas light, I blended one photo atop the other, merged the two layers and then applied a pastel photo action to achieve my final look.”

TIP: Contrast is key to creating a powerful double exposure. 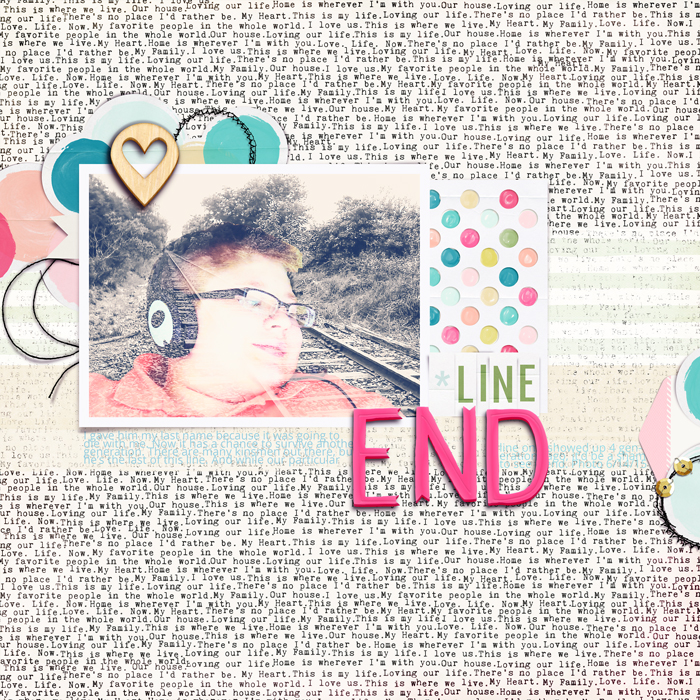 Christy Strickler says, “I have been reflecting a lot recently about my son’s upcoming birthday and his age.”

“Double exposures are perfect for telling stories of reflection due to their dream like quality. I used a Lomo Instant camera to take the shot. It has an button (M/X) for taking double exposures with Instax film. First, I took a photo of our summer scenery. I chose a bright flowering tree nest to some palm trees silhouetted against the sky. After taking the first shot, I positioned my son next to a light colored wall looking off into the blue sky. The first photo superimposed itself over the light portions of the wall background. It blends more subtly around my son and his view of the sky. When you are a beginner taking double exposures, think about heavy contrasts between light and dark.”

TIP: Here are a few tutorials on taking double exposure photos with a variety of film cameras: 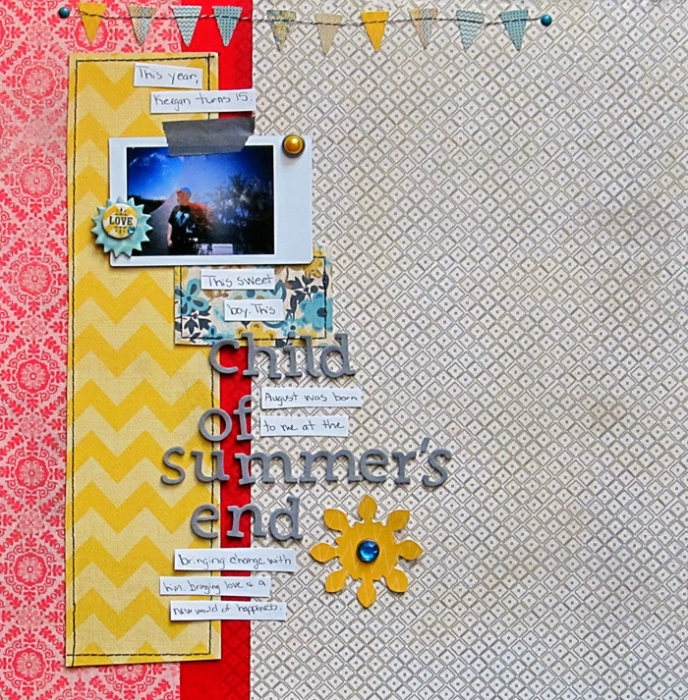 Deborah Wagner says, “We took some beautiful photos of my girlfriend’s daughter in the backyard; and I thought they would be perfect for a double exposure layout. I used layer masks and blend modes to superimpose the photos. To achieve a cohesive look, I merged all the layers; and used a soft and dreamy action on the merged layer.”

TIP: When using layer masks, try unlinking the photo from it’s mask. The layer mask stays in place while you move the photo to get a multi-exposure look. 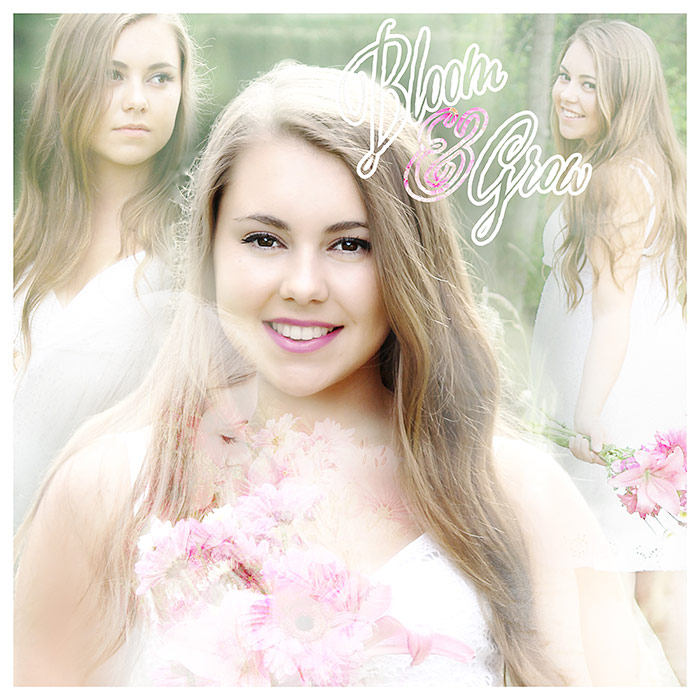 Judean Patten-Clark says, “I was inspired by the trendy double exposure technique in photography to create this page. Instead of an actual double-exposed photo, however, I used a silhouette of a little girl profile filled with colorful patterned paper.” 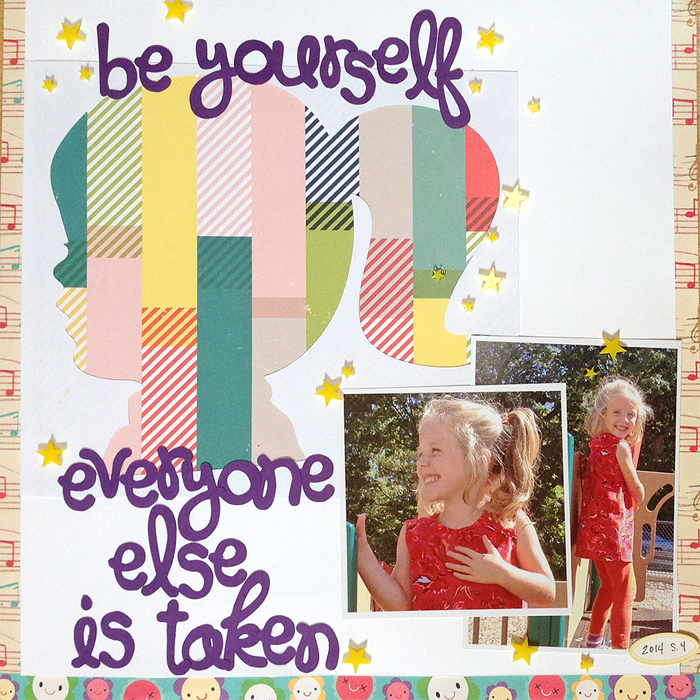