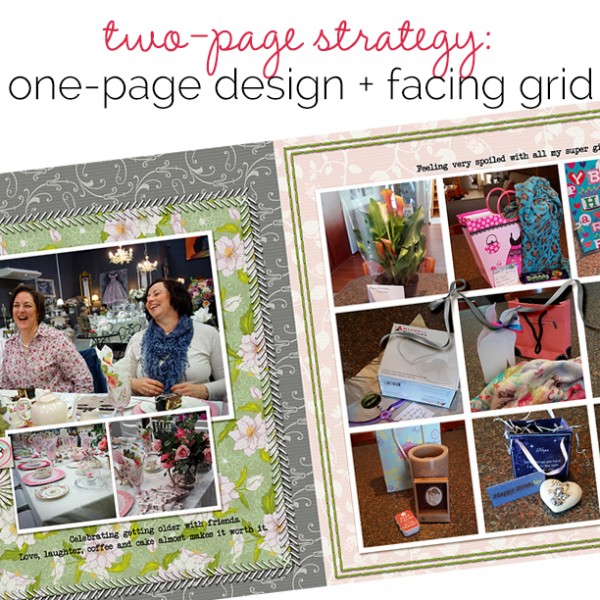 When your story is best told with lots of photos, you need to make a two-page scrapbook layout. Consider mixing a grid design on one half of the page with a design you typically use your for your one-pagers on the facing page to tell your story efficiently.

Marcia Fortunato says, “This layout is about the new lake home in Minnesota that we bought this past spring. I featured a full-on photo of the house and a picture of the lake, which played a huge role in choosing this home, on the left side of the two-page layout. On the right side I made a grid of photos taken the day we finalized the purchase, as we celebrated by having our entire family for dinner.”

“I united the two pages by using the same base of kraft cardstock on both sides. I began with the Minnesota patterned paper that I’ve had for several years. I had only one piece of this paper, so before mounting it on the kraft, I trimmed about a half inch off one edge. I flipped this strip over to the back side, which had navy words on light blue, then placed that along the right side of the grid to pull the blues to that side. I kept the strip of kraft along the top of both pages to lead the viewer’s eye all the way across.”

“The photos themselves work to unify the two pages, since there are photos of the house and the lake on both sides. I used embellishments to reinforce the connection by adding silver elements and arrows on both sides.”

Stefanie Semple says, “This layout celebrates my recent 48th birthday party. I chose my favorite candid photo of us laughing as the focal photo, with supporting photos of the venue details on the left, while the right page features some of my gifts.” 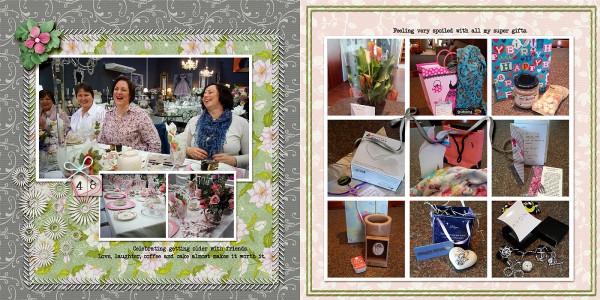 Terry Billman says, “This layout is about Brenna’s love for edamame and her refusal to share it with anyone. ”

“I used the large photo on the left as the focal photo because it shows her excited expression and her plate full of edamame. I grouped a couple of close up shots, embellisments and the journaling around the focal photo. The grid of photos on the right are a series of shots of Brenna attempting to use chopsticks and a photo of the sushi buffet. The two pages are united by using paint colors on the left that match the solid background on right. Also, to minimize the background colors of the photos on the right, I converted the photos of Brenna to black and white and used selective coloring to highlight her, her purple shirt, and the edamame.” 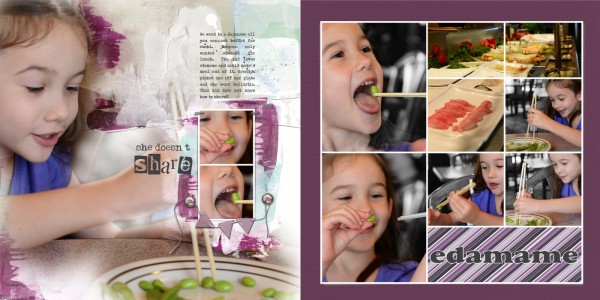 Devra Hunt says, “It’s time to sing Happy Birthday before cutting and eating the cake and I’ve captured all that here.”

“I featured the photo of my son with his cousins on the left. I grouped the individual photos of him with his cake on the right. The two sides are united by the background strips of paper and stitching that span the entire layout.”

Jennifer Kellogg says, “I’m feeling nostalgic because my daughter is going off to college and I wanted to capture a layout of her smiles.”

“I happened to snap the primary photo the other day. Although it may not be the best photography, I feel in love with it and Sam’s smile. It inspired me to create a collage of smiles through the years. I used the same template for both pages, customizing it for the primary photo. I created continuity by using the same colored background paper and same cover paper strip that runs across both pages. One of the elements in the kit was a paint splatter. I used it and it’s mirror image on both pages. It gives the entire layout a frame.” 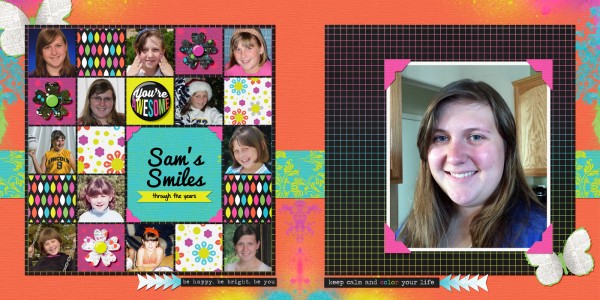 Vicki Hibbins says, “This is a layout about our trip to the zoo.”

“I often do double page spreads that have a grid on one side so that I can include lots of photos that help tell the story. The first page has two photos that sum up the whole day – Briony feeding the animals and family together – and the grid has the supporting photos. I also chose a single page template that had rectangles and a ‘blocky’ feel so that the two pages would marry together. I kept the pages clean and simple so that it would not become too busy.” 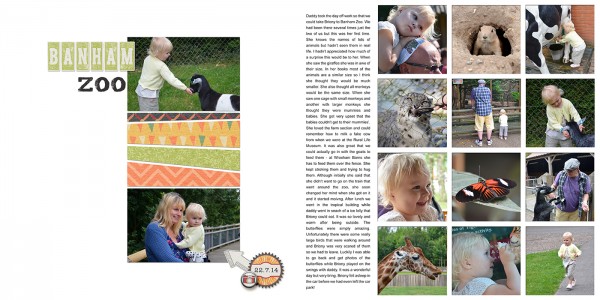 “The two portrait-style photos of him serve as the focal point, supported by a grid of candid shots from the party on the opposite page. I united the two sides of the layout by running strips of patterned paper along the top and bottom border of both pages, and repeating embellishments on both pages. (flair, enamel triangles, wood flags).” 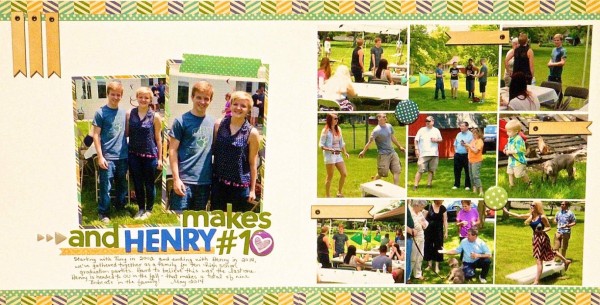