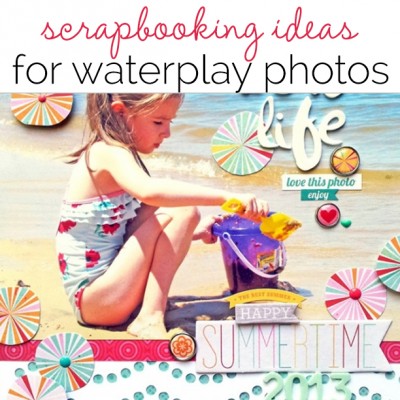 We’ve got scrapbooking ideas for your water-play photos here. Check out the colors, motifs, and layout designs that work to tell these wet stories.[hr] 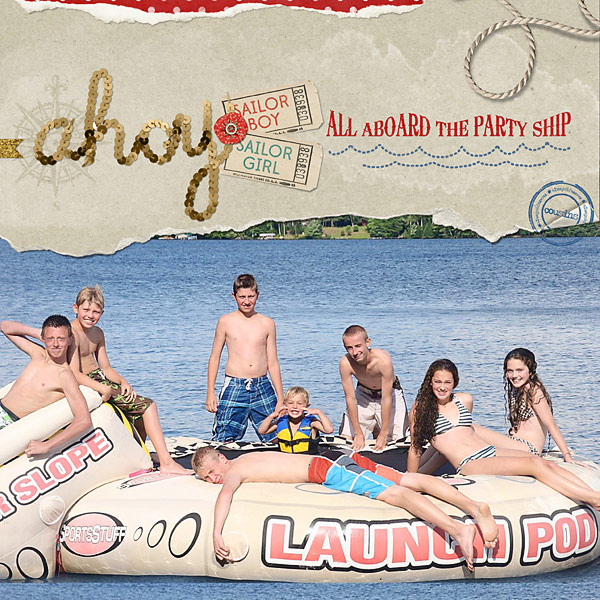 Deborah Wagner says, “This photo is of the cousins enjoying time together on the lake. Although the inner tubes are tied to the dock, I wanted to use products that gave the look of sailing on a cruise ship.”[hr]

use watercolors to make an ocean-like background for your photos 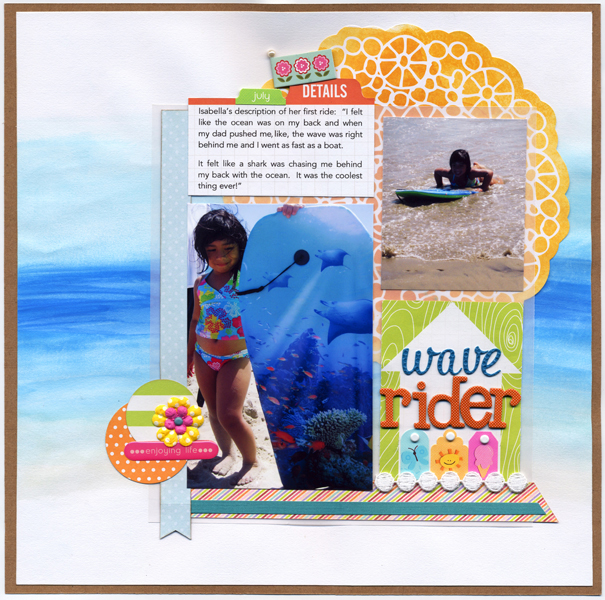 Jett Hampton says, “This page features my niece Isabella, at 4, describing what it felt like to ride her very first wave on a boogie board.”

“I’ve been playing with watercolors lately and here I’ve used them to make a water-scened background for my photos. I matted the photos on vellum to let the watercolor show through. The orange doily adds a punch of color and represents the sun shining on this brave wave rider.”[hr] 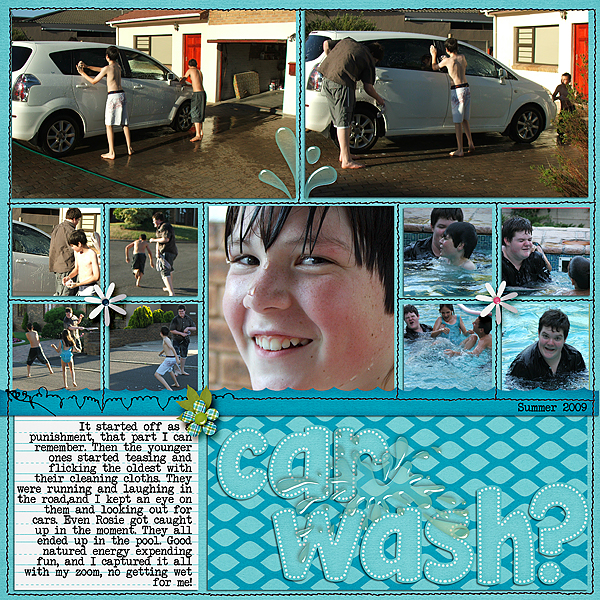 Stefanie Semple says, “What started out as a car washing punishment, ended up as hours of wet fun.”

“Because I used so many photos, I kept the embellishment to a minimum, even creating a tone-on-tone title, that doesn’t compete for attention with the photos or story. I grouped the photos according to the children’s activities to help with the story telling.”[hr] 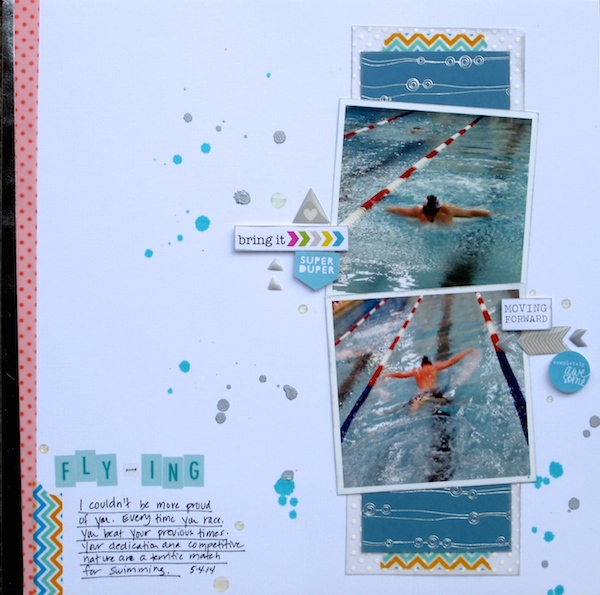 Devra Hunt says, “Here, my son is racing the 100 meter butterfly at his swim meet.”

Devra stacked the two photos to give a sense of his progress swimming down the lane. She says, “The title, “fly-ing,” is a play on words. I had never seen him swim this race so well and so fast. He really was “fly-ing.” I used bright oranges and pinks to support the motivating mood of an important event, and ink spritzes create a sense of water splashing out of the pool.”[hr] 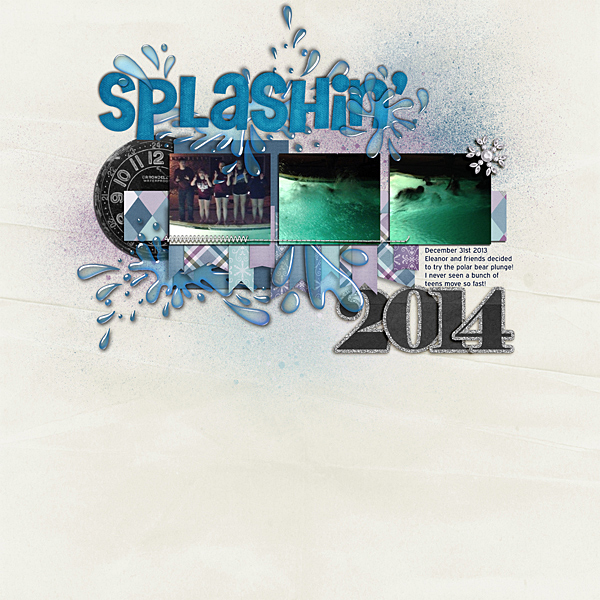 Ronnie Crowley says, “My daughter invited her friends over for New Year’s Eve and for a polar bear plunge.  The pictures aren’t the greatest, but they record a first for us as we’ve never had a pool before to celebrate New Year. To combine the themes of water and cold and New Year’s, I mixed snowflakes and water drops and a clock.”[hr] 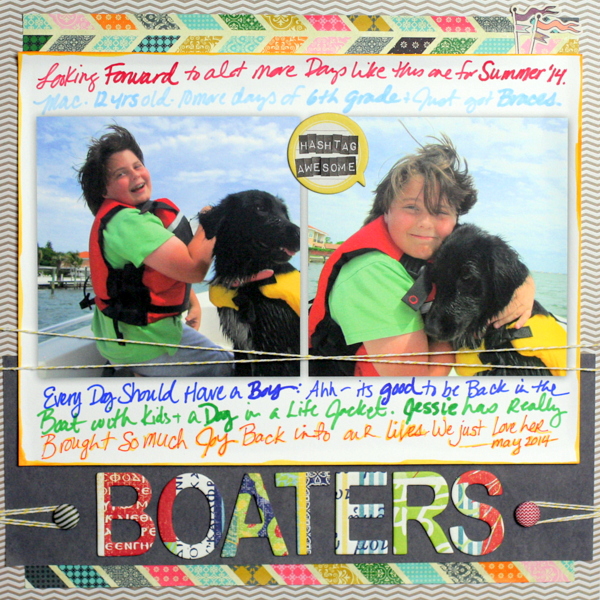 Katie Scott says, “These photos of my son and our new dog were taken on the first ride in our new boat.”

“I took these photos with my point-and-shoot camera, but cropped them square to resemble Instagram photos. I increased the saturation of color in the photos to make them brighter. I embellished with fabric-covered brads, chipboard and baker’s twine: the twine reminded me of all the lines (ropes) on the boat.”[hr]

get clear photos on a sunny day with fill-flash photography 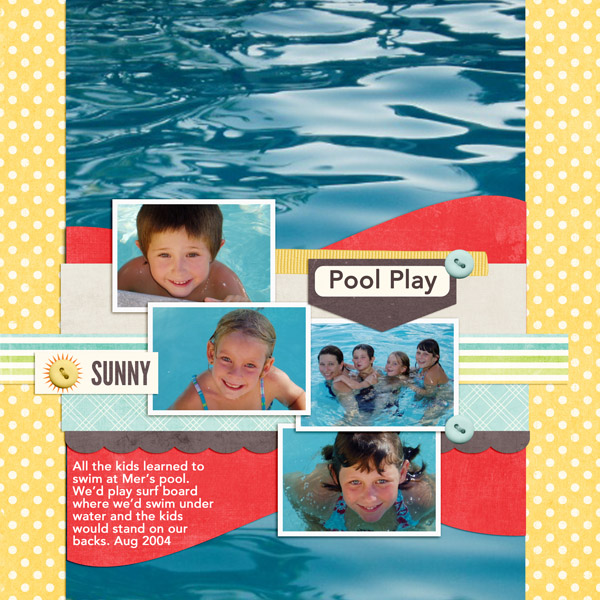 Jennifer Kellogg says, “I have many happy memories of spending time at my grandmother’s pool, and this page celebrates that.”

“While it was a sunny day, I used fill-flash to eliminate shadows on the kids’ faces. The reflection of the pool water really makes these photos pop. I used a photo of the water as a foundation, layering it behind the template’s wavy band, and then putting the photos on top.”[hr]

cut a wavy border with your Silhouette die-cutting machine 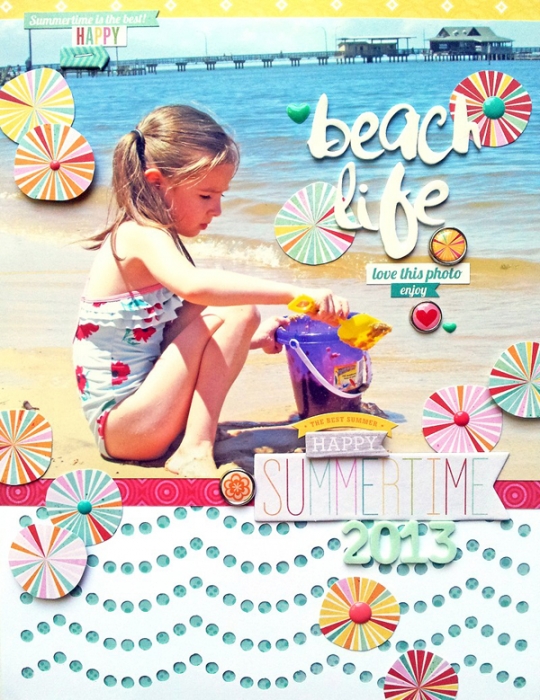 Ashley Horton says, “Since we live so far South, it’s always nice to enjoy the beach or any kind of water play during the hot summer months.”

“I used an 8.5″x11” page format and printed my photo at home, to fit across the page.  I added my title in the white space on the photo, and I layered embellishments on the photo.  At the bottom of my layout, I created a wave effect, by using a die cut background and backing it with a blue patterned paper.”[hr]

layer a detail photo over a full-page water scene 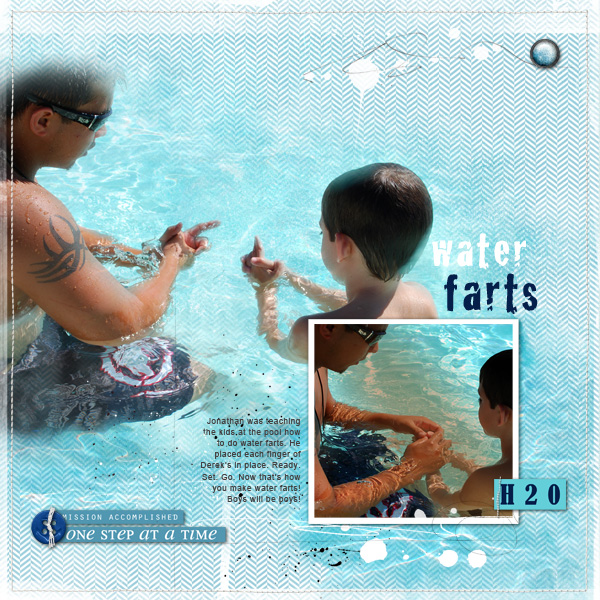 Terry Billman says, “Jonathan took time during his lifeguard shift to teach the little boys how to make water farts. He took his time, carefully placing each of Derek’s fingers in just the right place to make the biggest water fart. Boys think of the craziest things to do!”

“The detail of the smaller photo was magnified by the white framing and complements the larger blended photo.  Anna Aspnes’ H2O kit provided an ideal artsy background for blending the water and giving the layout the appearance of no boundaries.”[hr] 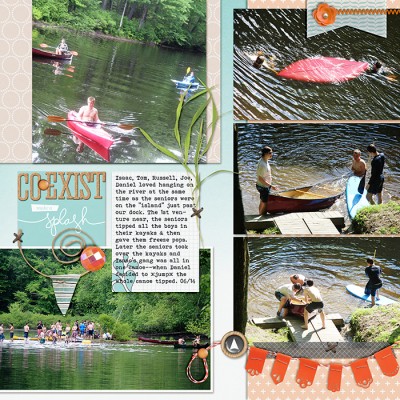 Debbie Hodge says, “This one page tells the story of a day spent on the river–of my youngest son and his friends (Freshmen) venturing out and their interactions with the Seniors gathered nearby.”

“I’ll probably make more pages with photos from this day for my older son–since his story of the day is different than that of my younger son. The challenge here was to get lots of details onto one page. I grouped the photos to show different times of the day and different parts of the story. I’ve learned that the river photos I take are not always the most striking. They are often quite busy and lack close-up detail. I made sure to include detailed journaling to clarify the photos. Three high-contrast spots of orange give the visual design flow and unity.”