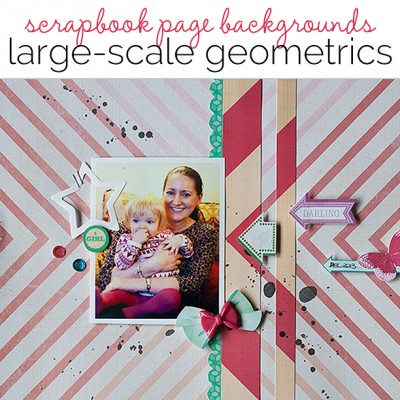 Making scrapbook pages with patterned paper backgrounds isn’t something new–but the trendiness of large-scale geometric prints presented our team with a fun challenge: make a scrapbook page with a large-scale geometric print in a way that enhances the story you’re telling. See what we’ve done with oversize dots, stripes, chevrons, bursts, and triangles/diagonally split pages. 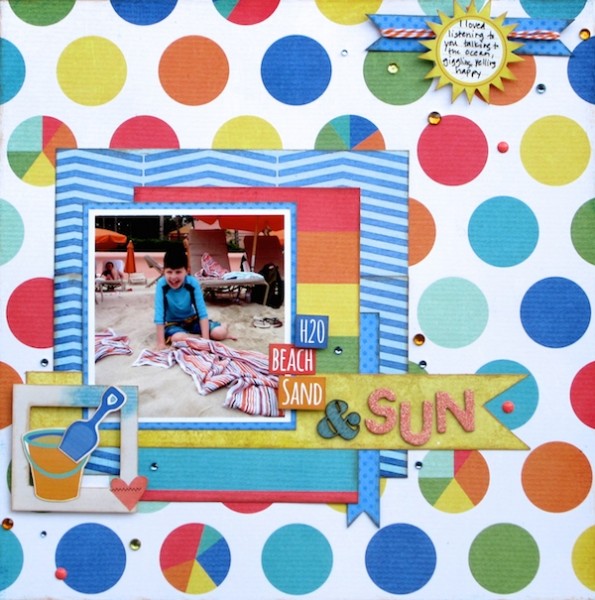 Devra Hunt says, “My younger son is having the time of his life in the sand at the beach in Hawaii in these photos.”

“The bright colorful circles on my background print remind me of the sun, beach balls, and beach umbrellas on a hot day.  The blue circles pull out the  color of my son’s shirt and echo the color of the sky and water at the beach.”[hr] 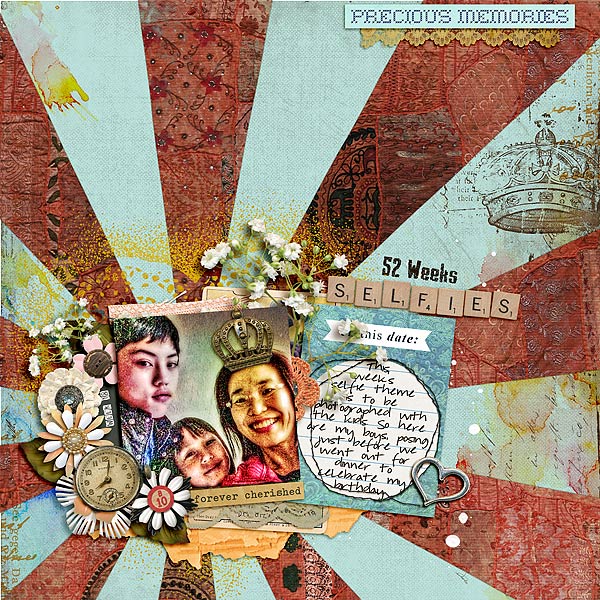 Audrey Tan says, “This page is about my weekly project of scrapbooking selfies. At the end of this year, I’ll have 52 layouts about and showing myself. The photo is placed at the center of an oversized starburst pattern. The starburst appears to be radiating from the photo, and it’s helped tell the story that my boys are my precious stars. I used a mask to create the starburst pattern, clipping patterned papers to alternating rays.[hr] 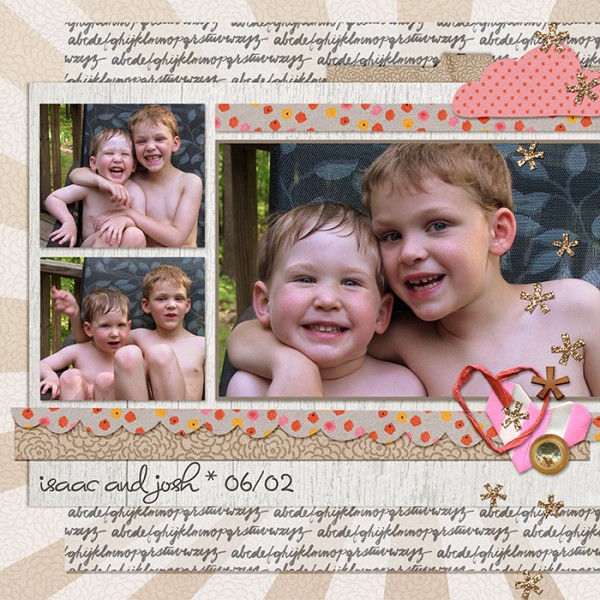 Debbie Hodge says, “The photos here are from a series taken many years ago. There’s no big story. Rather, I wanted to capture a sense of my sons’ relationship and evoke a joyful feeling in the viewer.”

“The canvas background is a burst of alternating neutrals that was originally quite bold. This is a digital page and I lessened its power in two ways. First I layered a neutral floral print over it and lower the opacity of the floral print to let the burst show through but more subdued than it had been. Second I put my photo on two mats: a white woodgrain overtop of a text-print piece of vellum. The burst is still there — supporting a mood of exuberant joy, but its contrast has been toned down to allow the photos to shine.” [hr] 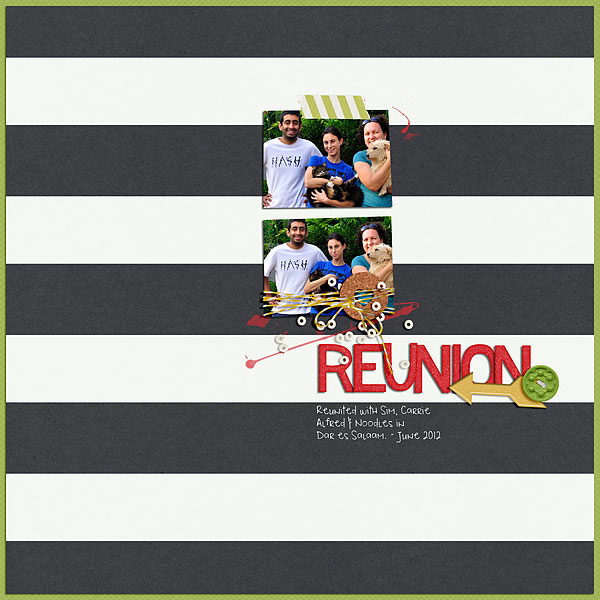 Heather Awsumb says, “This page is about a reunion with my friends and their pets after they moved to Dar es Salaam, Tanzania.”

“I used an oversized black-and-white stripe and made the design work by using small photos that contrast with the oversized pattern. My title fits in one of the wide white bands. I embellished with strong pops of color.”[hr] 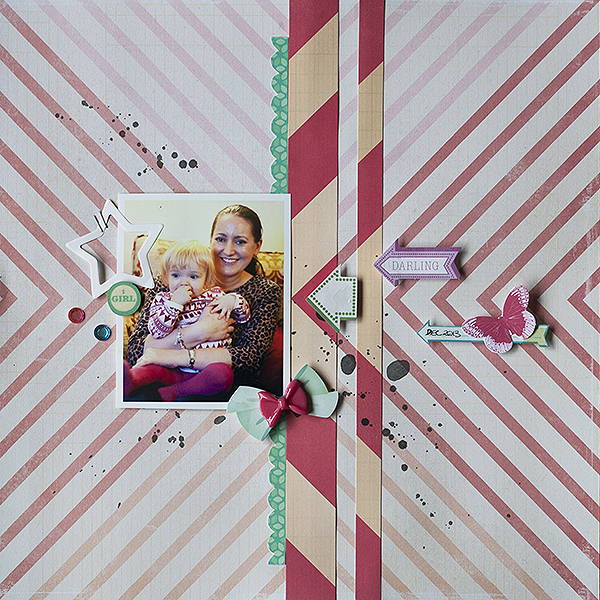 Amanda Robinson says, “I scrapbooked a photo of my sister-in-law with my niece at Christmas, but I focused on the people rather than event.”

“I used an oversized chevron design with for points all moving into the center of the canvas.  I cut down another sheet of a wider chevron print with the same center-pointing configuration and layered it on top of one area to create a more obvious focal point and unexpected interest. The chevrons all point the viewer’s eye to the photo. To amplify the effect further, I added arrow elements which also point in toward the photograph.”[hr] 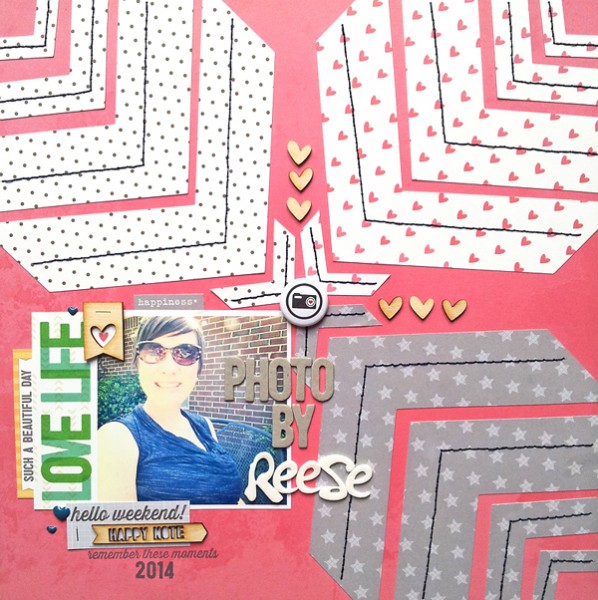 Ashley Horton says, “As my children are getting a older, they are interested in getting behind the camera and snapping photos.  Our four-year-old took this shot of me on Easter weekend.”

“There are a lot of oversized geometric shapes in  scrapbooking products currently and one of my favorites is the chevron.  I used my Silhouette Cameo to design a custom, center-pointing chevron background.  Once I had my design finished, I cut the Chevron pieces on different patterned papers in several different sizes.  I wanted the pattern to flow toward the center of my layout, to create movement and energy.  This design creates visual interest for my layout background, and also draws your eye to the photo and title of the page.”[hr] 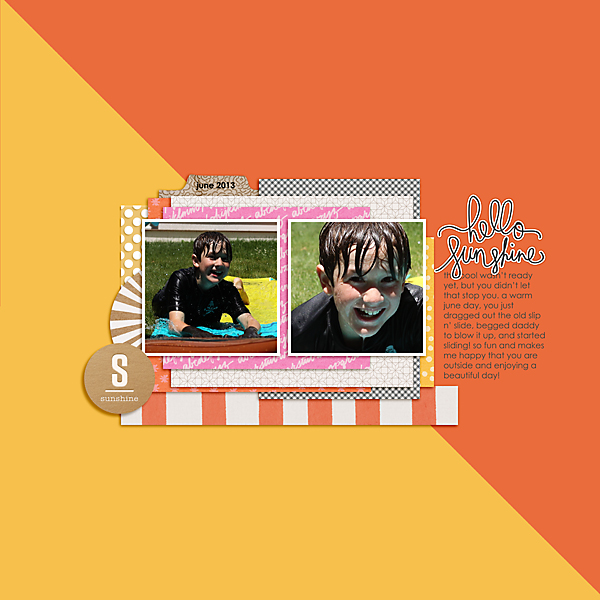 Celeste Smith says, “This shows my son making his own fun in the backyard with the slip and slide.”

“I’ve used two large triangles as a background. Placing the angle running top left to bottom right helps with the flow of the page. I tend to build my pages on plain kraft and then try different backgrounds at the end. If you have a large scale print in the background, it helps to choose your other patterns in smaller scale.”