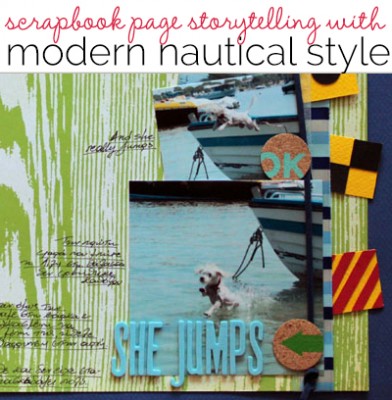 Modern nautical styling is trendy and perfect for summer, beach and water-themed scrapbook page storytelling. Nautical styling is a timeless look. Today, though, a nautical look doesn’t mean including red, white and blue. Rather, the “modern nautical” trend uses color, pattern, motif, and texture evocative of water and the beach.

Take a look at the modern nautical inspiration we’ve collected on Pinterest and the pages made by our creative team below, and here’s a quick list of elements that work with the Modern Nautical style: 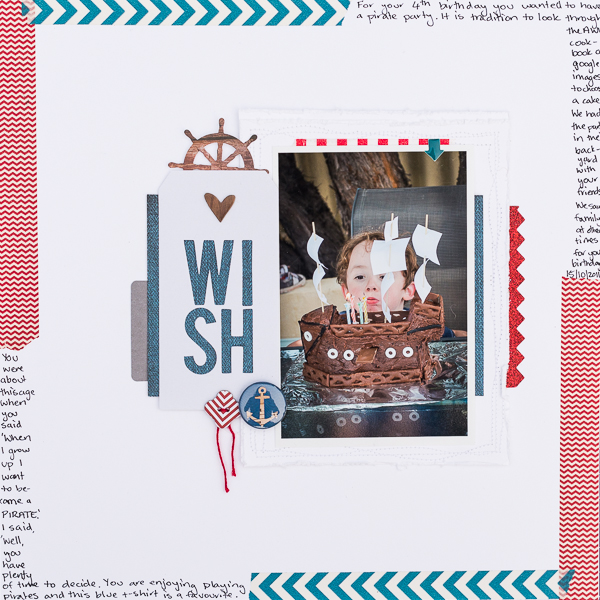 Kristy T says, “This layout is about my son’s 4th birthday party which had a pirate theme: he wants to be a pirate when he grows up.”

“The page has modern nautical styling driven by red and blue patterns in combination with woodgrain elements on a white background.  The chevron print is a modern touch combined with more traditional and obvious nautical motifs of an anchor and wheel.”

Modern nautical styling for a story of family history 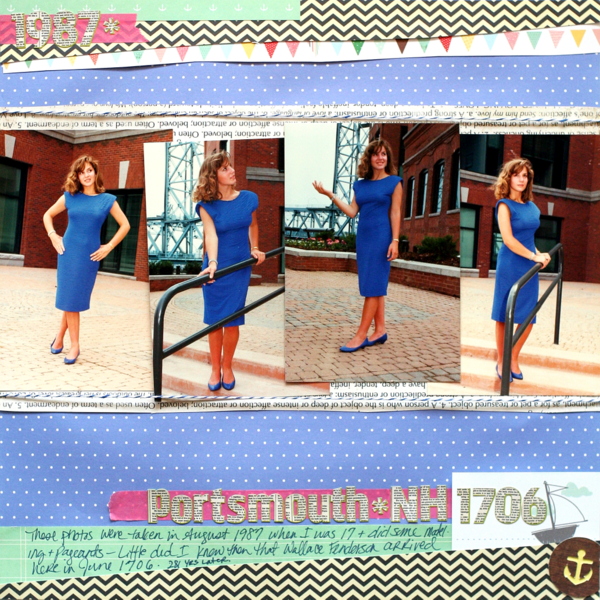 Katie Scott says, “I had a modeling job in Portsmouth, NH in 1987 when I was 17; years later I learned that my father’s family arrived in the very same Portsmouth, NH from Scotland in 1706. I had always thought our family history originated in Boston or Maine so this was a surprise.”

“Because this story is about a seaport connected to my family’s past history and modern life,  I wanted to use both older and modern nautical elements.   The pink Washi tape, the bits of aqua green, the pastel colored banner paper and the sailboat all read more modern. The black chevron, text-print, and letter stickers read more old time nautical to me.”

Modern nautical styling for the story of a first beach visit 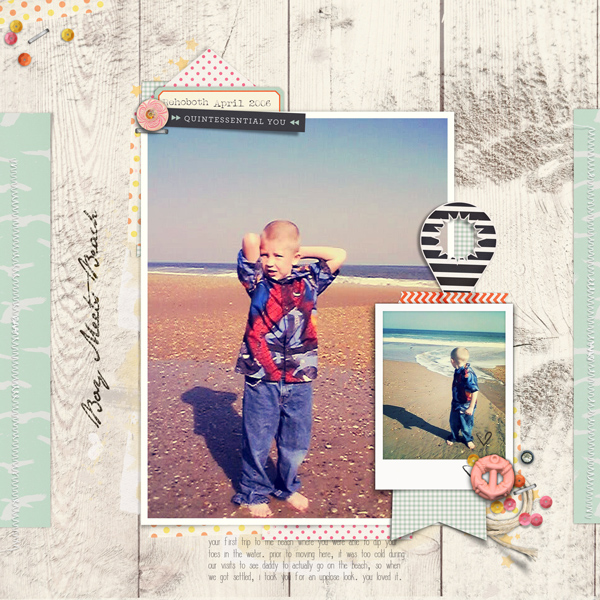 Carrie Arick says, “This page records my son’s first beach visit. I used patterns and embellishments with a nautical theme, but in unexpected colors. The typical red, navy, gold and white is replaced with pinks of varying tints, orange-leaning reds, yellow, aqua and an almost black navy blue. The nautical symbols are a natural fit for seaside photos.  Since the story of this page is about having a new experience, the modern take on an old theme enhances the visual story.” 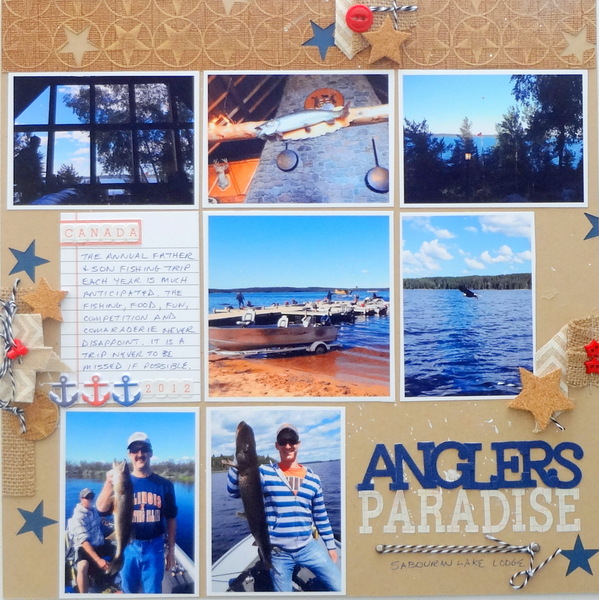 “My interpretation of modern nautical sets off the photos and title with limited amounts of navy and white on large Kraft background.  Mautical textures of sanded paper (to imitate wood), cork, twine, burlap and canvas show up in my embellishments.  I added anchors, stars in several versions (even punched to act as peepholes) and a touch of red for interest.”

Modern nautical styling as a springboard for color play 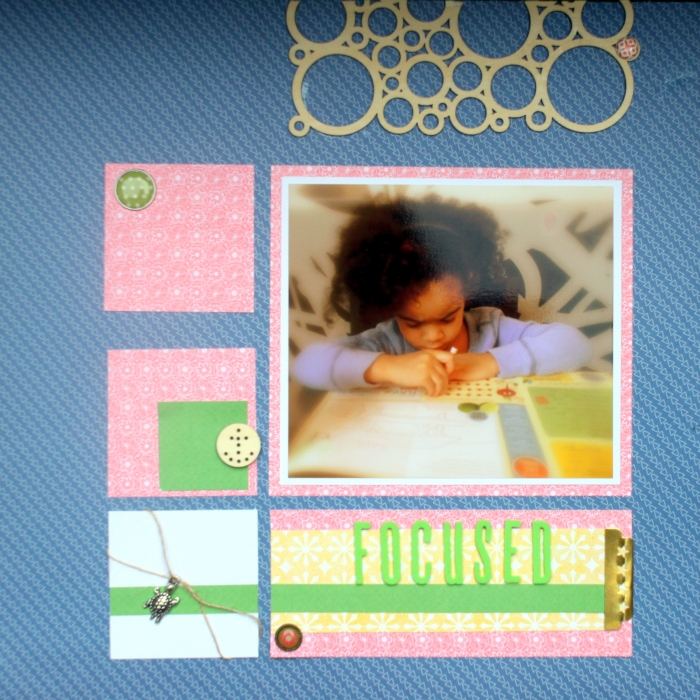 Rosann Santos-Elliott says, “I had a visit from a friend and her daughter, and we had brunch at a restaurant. In this picture, she was focused on her drawing. Even though this photo isn’t related to the ocean, its soft colors inspired me to use a nautical theme that substitutes pink for red. The wood veneer anchor, silver turtle and the brown twine are nautical motifs.” 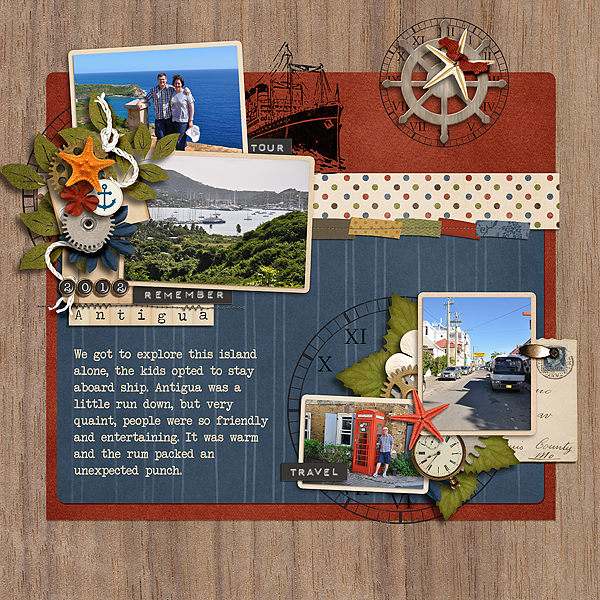 Antigua by Stefanie Semple. Supplies: Chelle’s Creations: Traveler; Angie Kovacs : sail away mini; Memory Clips by Ramona : Moving Day: Katie Pertiet : Away from it all brushes and stamps No1; LDrag Designs: In the Tropics

Stefanie Semple says, “This layout tells the story of our day trip from the cruise we took in 2012. Modern nautical elements include the wood background paper, the addition of ship’s wheel and the anchor motif, the use of circles reminiscent of port holes, the blue, red and light colour scheme as well as the fun addition of star fish within the clusters. Cruising allows you to travel the world and pick up bits and pieces from the variety of ports you visit, and the clusters in this layout are filled with interesting bits and bobs in just the same way.” 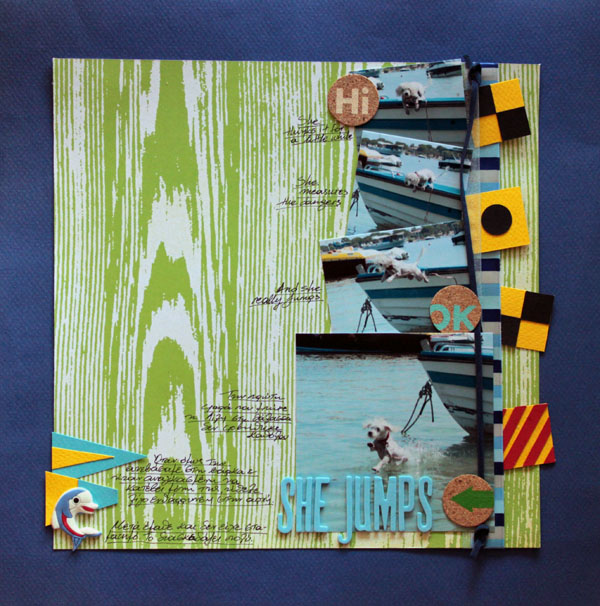 Kiki Kougioumtzi says, “This is a layout about how much our dog enjoys the sea and diving from high. Because the story of my layout has to do with the sea, I went with a nautical theme. I was inspired by these elements of the modern nautical style: color (blue,green), reclaimed wood and cork, signal flags (which spell our dog’s name), dolphins and knots. And all of the elements are placed in a triangular form, “held” by ribbons, like a sail on a mast.” 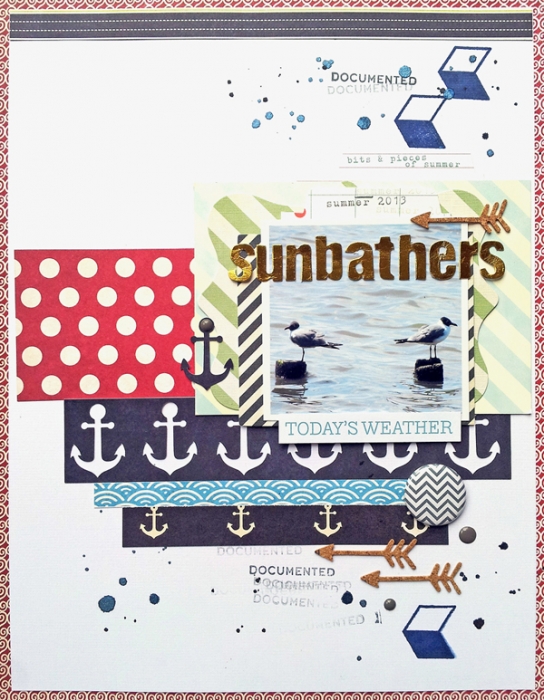 Ashley Horton says, “We live near the Gulf Coast, and often see seagulls when we are near the water. I used a mix of red, navy, bright blue, green and gold: traditional nautical colors punched up with the unexpected.” 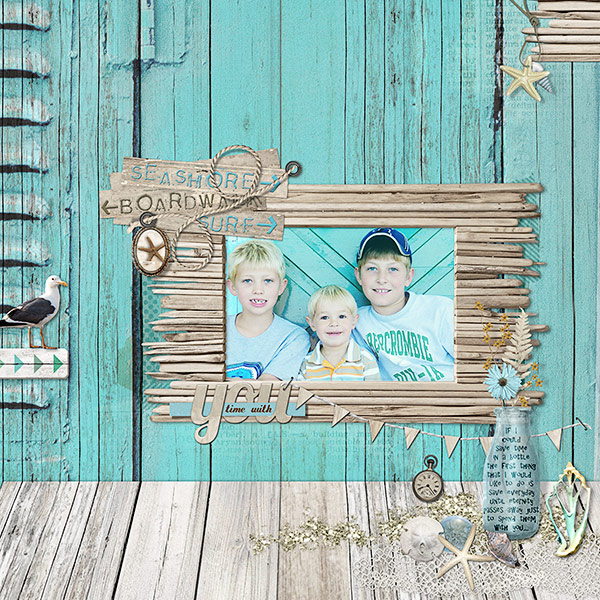 Deborah Wagner says, “This is a photo of a dear friend’s three boys taken on a day at the beach. I wanted my page to give the impression you were strolling down the boardwalk near the ocean so used weathered wood and beach motifs like the shells, bird, and rope.”