Scrapbooking Ideas for Storytelling and Design with the Constellation Motif 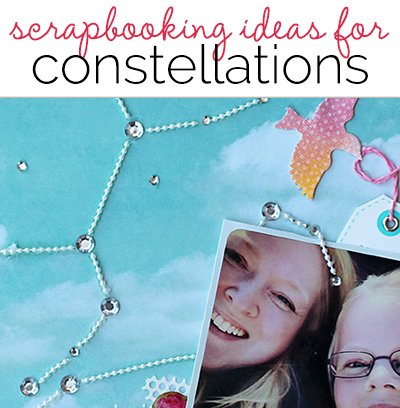 Find scrapbooking ideas when you connect the “constellation dots.”

Star constellations let us find order in chaos, to make patterns out of randomness, and the motif offers opportunities to: support story (from looking to the stars, to going places, to having a story written in the stars), add sparkly bits, and give order to scatters. 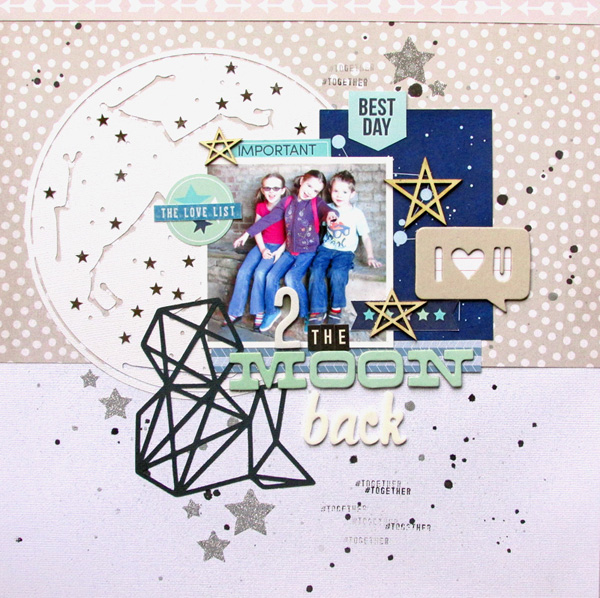 Ashley Horton says, “It’s rare to get a photo of all three kids, smiling and looking at the camera, but this one does it and makes a great photo for a page about how I love them “to the moon and back.”

The constellation motif is a great visual to go with Ashley’s message. She cut constellations from a circle of star print paper and used it as a foundation. She says, “To carry the constellation look into my title  for big impact, so I used a large cut file of a geometric ampersand that echoes the lines of a constellation.”

tell the story of your night sky 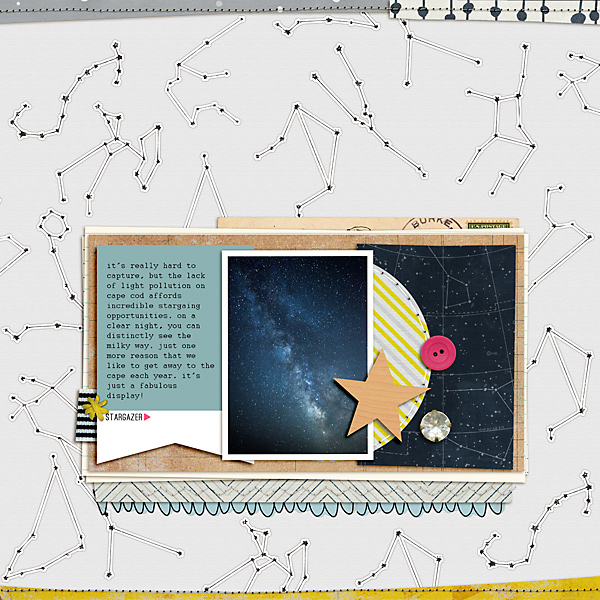 Celeste Smith says, “The night sky on Cape Cod is so different than the sky at home.”  To scrapbook this subject, Celeste added stickers of constellations from a digital scrapbooking kit to white cardstock for the background. She says, “I was sure to space the constellations evenly and purposefully to make it look like the paper was created that way in the first place.”

Illustrate a fireworks story with constellations 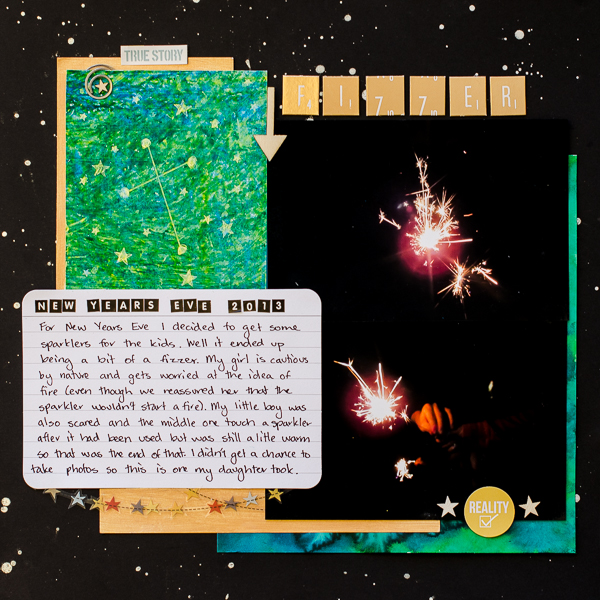 Kristy T says, “My page is about this New Year’s Eve when I got sparklers for my kids to celebrate and it didn’t quite turn out as I had imagined.  It ended up being a bit of a fizzer. I included the Southern Cross constellation, which is one of the constellations that can only be seen in the Southern Hemisphere where we live.”

“My rendering of the constellation was by pictures of constellation art for children.  My son did the coloring (first with a yellow wax crayon and then a blue over the top).  I looked at images of the Southern Cross online and scratched out the dots before ruling the lines, using the rounded (ball) end of a paper piercer.  I used the Heidi Swapp confetti stencil to ‘scratch’ off the crayon using the pointed tip paper piercer to create the stars.  Use a light hand with the piercer so the paper doesn’t tear.”

“The night-sky background was made by flicking Calico Shine over black cardstock.  I think you could also create a constellation using this technique but using a dropper or the tip of a paint brush to position the points of the constellation where you wanted them.” 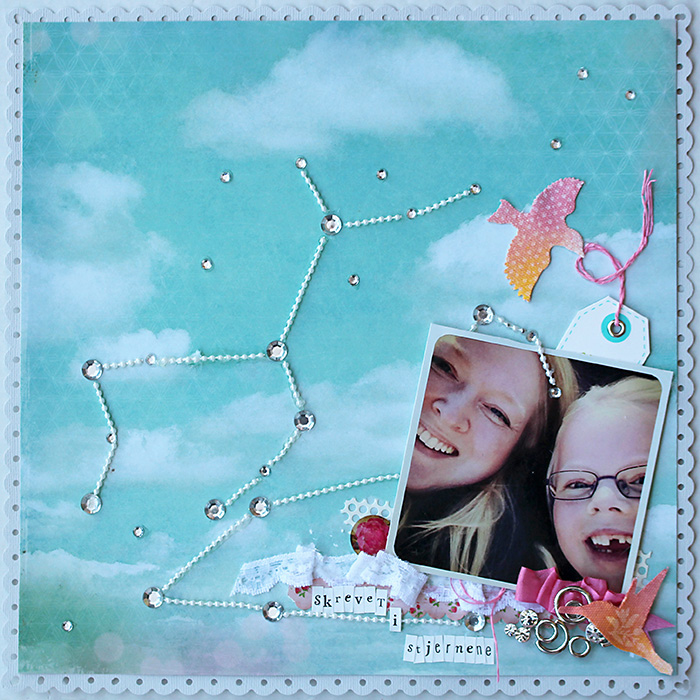 Lise Mariann Alsli says, “This is a page about my love for my daughter and my feeling of pure happiness I get when I think about being her mother, and I used a photos of use laughing together that I love.”

“I added our zodiac star constellations to support the title “written in the stars.” Her sign is the Aquarius on top, and mine is the Leo partly covered by the photo.I made the constellations with rhinestones (some big and some small) and pearl ribbon to define lines between the “stars” in the constellations. The patterned paper of the sky also supports the theme.”

Make a constellation with those little embellishments you usually scatter 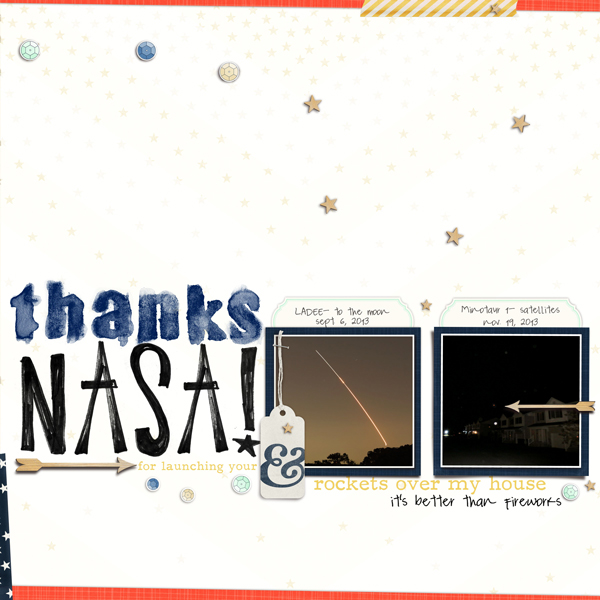 Carrie Arick says, “I documented a couple of the launches from the nearby NASA Wallops  Flight Facility, which our family thinks is really cool. The Big Dipper (Ursa Major) was the closet visible constellation in our sky during these launches.”

“My first step in creating my constellation was Go Astronomy for a map to help me get my Big Dipper shaped well enough to be recognizable. I knew my constellation would work better at the top of my page, giving the rockets in the photos a place to go.  I made the constellation with embellishments that I would normally use for scattering: wood veneer stars and sequin stickers on a star-print paper. The background paper was originally very dense and busy, so I layered another paper behind and set the blending mode on the star paper to overlay and reduced the opacity.This created a more natural, dimensional ‘sky’ for my Big Dipper to live in.”

record a love “written in the stars” 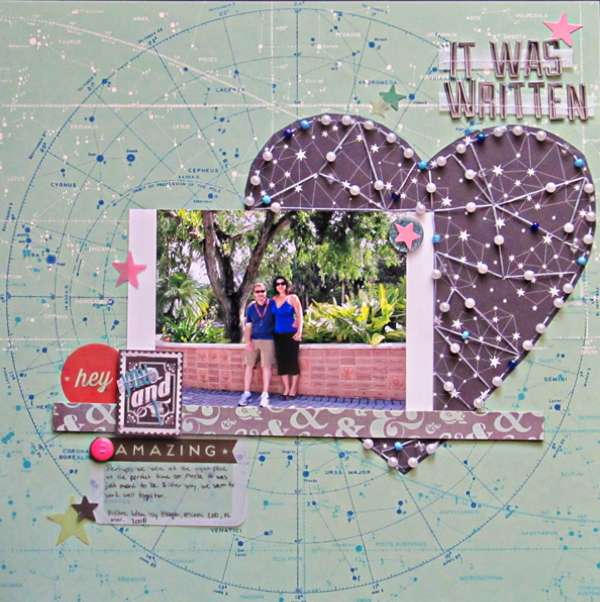 Christy Strickler says, “This is a rare photo of my husband and me, taken by my son.” Christy told their love story with the title It Was Written and a constellation motif.”

“I layered constellation patterned papers over each other. I used floss to string beads across the heart in an effort to create a dimensional constellation of my own. I first outlined the shape, then randomly created shapes within it. Most constellations seem to feature triangles and trapezoids, so I stuck with those shapes within the heart. I used one long stitch between each point rather than smaller stitches in order to emphasize the intersecting points of my constellation.” 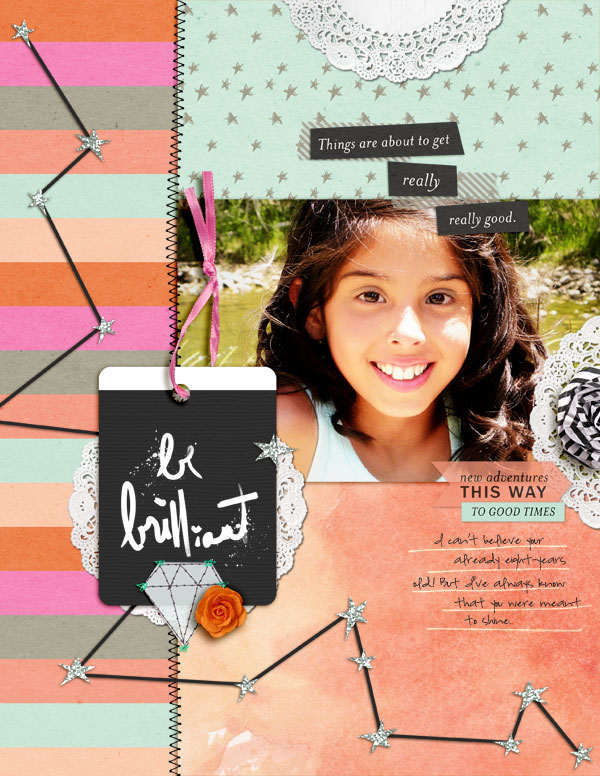 Amy Kingsford says, “This photo is one I recently took of my niece.  She is growing up so fast and I see her now at age 8 and I just know she is going places. It was this thought that inspired my page and the use of stars and constellations throughout.”

“To create my own constellation feature on my page I added this silvery sprinkle of stars and then used my line tool to connect the dots.  It turned out to be a unique and eye-catching way to frame my page.”