Pair Your Photo with Haiku Journaling to Evoke a Moment

by Debbie Hodge | Write Your Story 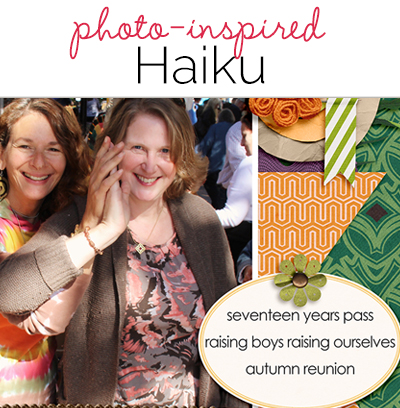 Haiku is a form of poetry that’s well-suited for sharing a moment of life that has moved you. Pair a haiku with a photo for a scrapbook page that presents a layered situation. A key aspect of is the idea of cutting, of juxtaposing two images that are cut by a word or phrase. Learn more about writing Haiku and check out the challenge from Doris Sander that got our creative team writing Haiku to go with photos.  See Doris’ series of Haiku on her blog.

Debbie Hodge says, “This is a photo of me with a friend I met when my first son was born. We were mommy friends, and our children grew and we haven’t seen much of each other. Now we both have 17 and 14 year old boys. I unexpectedly met her this fall at a harvest festival and had my son take our photo.”

“The Haiku that I wrote juxtaposes the ideas of seasonal autumn and the autumn of one’s life along with the time that has passed since we started raising our boys. I love how attending to the rules of a Haiku helped me evoke a layered situation –17 years of my life, of my friend’s life, of our sons’ lives–with just a few words.” 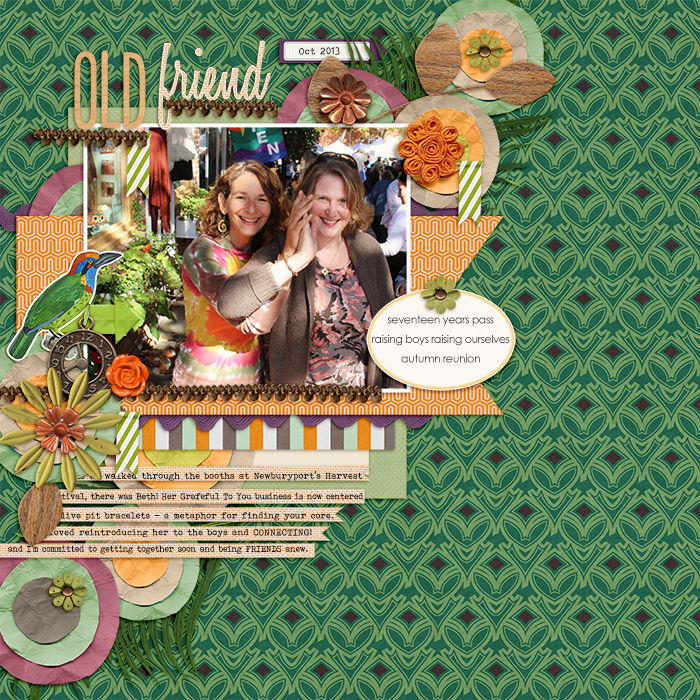 rocking quickly on all fours

Celeste Smith says, “I looked through photos from the month to write a about, and this one of my nephew just kept coming back to me. Those pink cheeks! I concentrated on the syllables and then found additional words or dropped words after I wrote the lines. I used a larger font than I normally would to write out the . I chose a handwritten font to make it seem more personal, and the Haiku then became my journaling. My suggestion is to give it a shot and have fun. We have fun talking in Haikus in our house. The boys think it sometimes sounds a little Yoda-esque.” 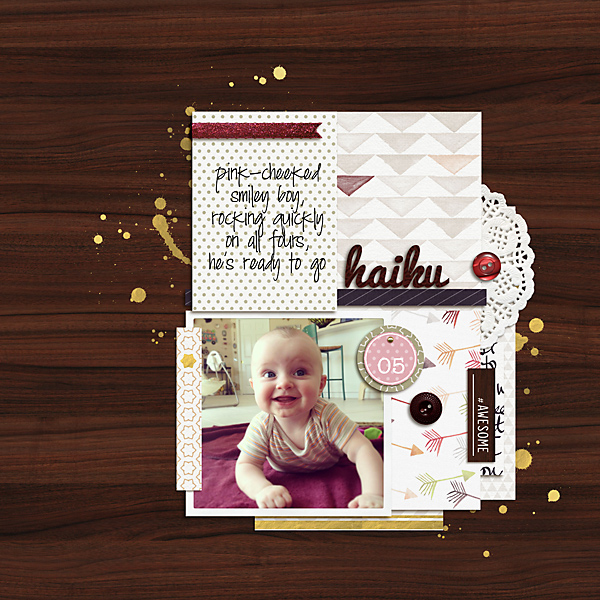 Debbie Hodge says, “On Halloween , I worked with a photo of my son and friends on a Halloween hayride. I took the photo without a flash and the teens’ movements can be seen in the photo’s blurs. This is a hayride my kids did when they were younger.”

“When I wrote this , I wanted to work with the concrete details, of a nighttime blurry photo on a spooky halloween hayride and  the idea of time passing quickly, as in a blur, as they grow up.” 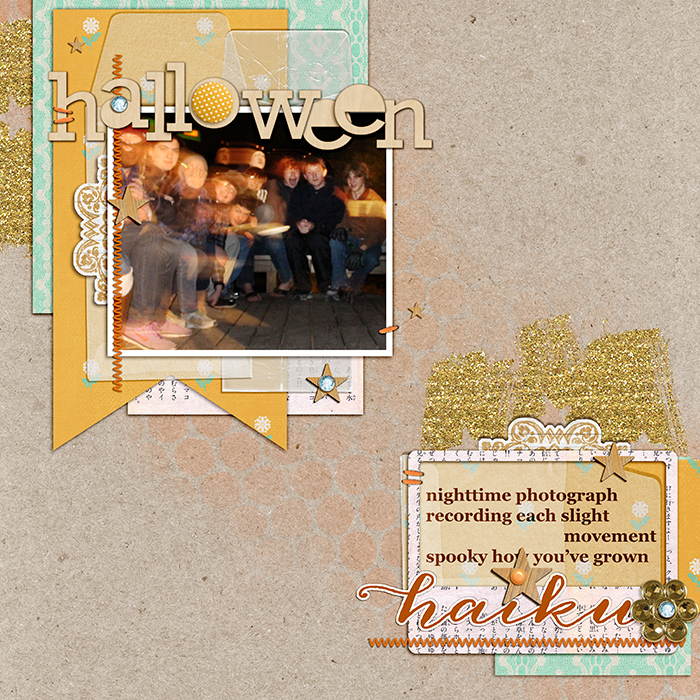 Is the 5-7-5 aspect of writing too constraining? You can still use the 17-syllable form, either in lines of differing syllable lengths or in a with a single line of prose.[hr]

Susanne Brauer  says, “My family and I are fanatics (fan addicts) about Cardinals baseball.  St. Louis is known as “baseball heaven” because the fans are so supportive.  We were lucky to attend a World Series game this year and posed for a picture amid the festivities outside the ballpark.”

“Baseball seems an unlikely topic for Haiku, but the challenge to use very illustrative language with three basic parts was a hit – maybe even a triple!  First the fact that Cardinals and their fans are dressed out in red gave me the main illustrative element of color.  Second, using flock tied directly to the Redbirds. And third, bringing them home to ‘baseball heaven’ finishes the metaphor.”

“It really was not as complicated as all that, one thought lead to another.  This leads me to my tip for you on writing , the same as my best tip for perfecting a layout – let your initial idea simmer for a while, as your later thoughts will be better and more focused.” 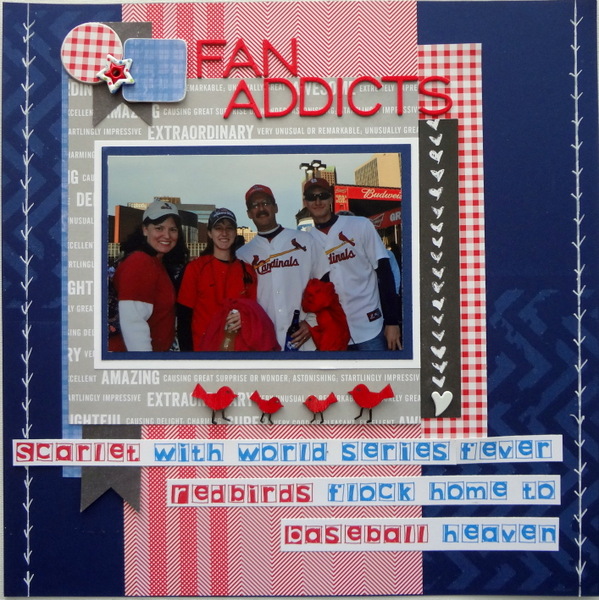 Michelle Houghton says, “I wrote this Haiku about the photo on the page. I liked the idea of Haiku putting nature at the center of the poem.  I kept the syllable count loose.  I wanted the words to flow instead of being locked into an exact count.  Like the simple words and photo, I wanted my layout to be clean and simple, focused in on the beauty of nature. Writing a Haiku is one of those things that you just have to try.  Like art there is no right or wrong. Take the freedom to try something completely different.” 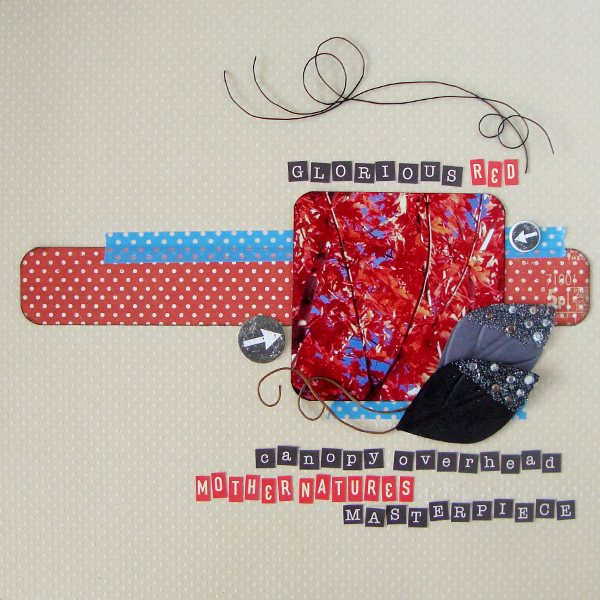 Ronnie Crowley says, “The photo reminds we how old my daughter is and how she will be leaving for college soon. When I chose my Haiku I knew that this picture was the one to go with it. I tried and tried to write a Haiku and failed. I thought it would be easy but I didn’t find it easy. I asked my daughter to help me as she likes to write poetry. Instead of writing me one she found me a selection from the internet and this one spoke to me. As a senior she will be gone in a few shorts months and I don’t think I’m ready for it. It’s OK to ask for help from others when you’re stuck on  a project. It doesn’t make it any less your own. I don’t know if my daughter realized what this would mean to me when she gave it to me as a choice, but the instant I read it it gave my heart a tug.” 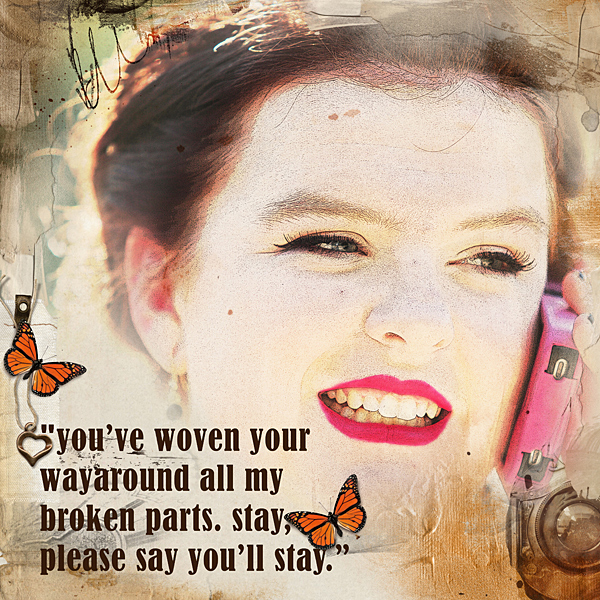 not 17 syllables – but short and evocative of a moment

Rather than sticking to the the 17-syllable count of a traditional Haiku, instead take your cue from the short and evocative language of Haiku, the tendency to evoke a season, or the juxtaposition of two ideas.[hr]

Christy Strickler says, “Before choosing the photo for this page, I researched writing Haiku. I chose the photo for its relevance to our summer season, or its Kigo.”

“My son standing near a pond in the cool rain is a very still scene. One of the things I remembered of that day was how the rain tapped with a strong purpose on his umbrella.  I wanted to show the juxtaposition between the insistent sound and the quiet setting.”

“After writing and rewriting the a few times, I choose my supplies. The wood grain paper represents the outdoor setting. I used cool tones of purple and blue to represent the cooling rain.  Clocks represent  time. I used a sun charm to represent summer and added a cloud with rain and an umbrella to support the rainy day theme. Since this is a golden moment in time, I chose gold elements. They hold the photo in place while the clocks flow freely through the page.”

“The first part of the became the title. The rest was sufficient to be used as journaling for the layout.” 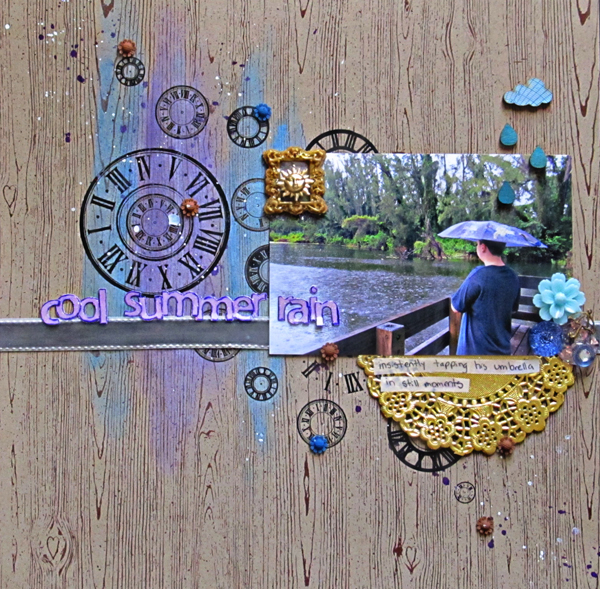 Wagging and drooling, freedom in a mini-van

Deborah Wagner says, “When I was searching for inspiration, I came upon a website of funny dog Haiku. It made me giggle, and I remembered a recent photo I took of our dogs as they were heading out for a ride with my husband. I wrote my own haiku thinking about using language to capture a feeling.  I don’t think I will ever be poet, but this was a lot of fun!”

Do you have any photos that would work well with Haiku-style journaling, short prose? Give it a try and link us up in the comments.