Scrapbooking Ideas for Personalizing Layouts about the Places You Love 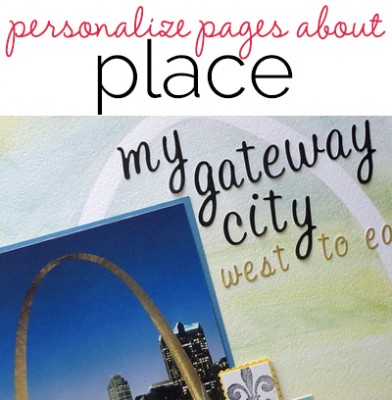 Is there a place that has your heart? Is there a location with unique characteristics that you’re passionate about? Personalize a scrapbook page about a loved location by incorporating details that are unique to the location. Try:

Susanne scrapbooked a tribute to St. Louis and represented it with the iconic arch known as the “gateway to the west.”

Susanne Brauer says, “I was born and raised in St. Louis, which is symbolized by its iconic Arch, known as the Gateway to the West in tribute to the early settlers and their westward expansion across the Mississippi River to new frontiers.  For me personally, it was a gateway to the East: the in which direction I traveled after I was married when we established our home in Indiana.  It was a doorway to a new beginning, that is always open to returning.  I still smile at the symbolic arch whether traveling east or west. On my page I chose to brush ink onto cardstock using a makeshift mask of the Arch.  I blended it to mimic the light from the photo, which, incidentally is memorabilia from an advertising piece my daughter received on a college visit to the city.” 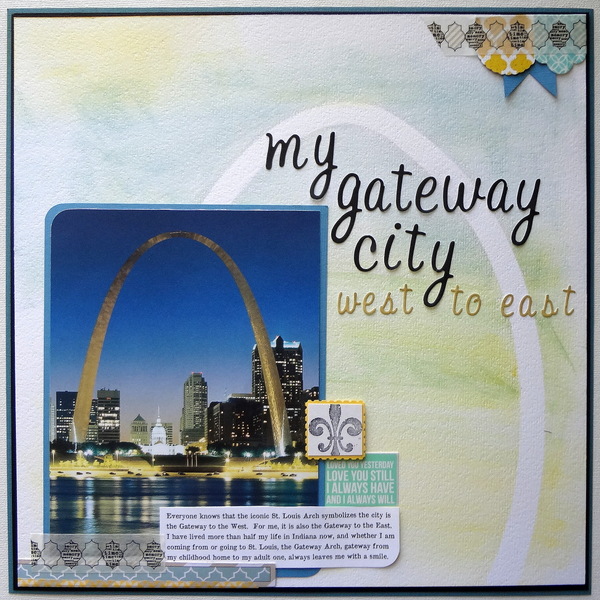 Katie Scott scrapbooked her city and found the city seal (or logo) online, printed and embellished with it.

Katie Scott says, “I have lived in St. Pete for 25 years now and lately I’ve had wanderlust, I even have had fantasies of leaving when we retire. On a field trip with my daughter to City Hall, however, the mayor said that his goal is for people to come to St. Pete to college and stay to raise their families – which is exactly what I did. All of a sudden I got teary and remembered that I really do love my city. I found a couple of St. Petersburg, FL city icons by doing a Google search. I printed the city seal and used it to embellish.” 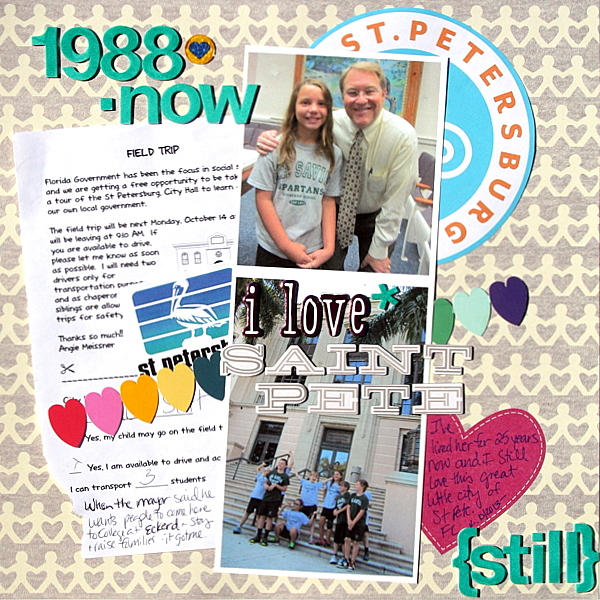 Ronnie included a motif from the Texas flag, and images that are pure Texas: the Long Horn and bluebonnet flowers.

Ronnie Crowley says, “Ninety percent the time–due to the heat–Texas is brown. There is no denying that Texas isn’t the most beautiful state. This changes in the spring when for a few short weeks (if there has been enough rain)  the wild flowers of  Texas bloom in all their glory.”

“My husband spends hours through the year following the weather patterns and bluebonnet spotting blogs which predict where the best color will be. Then, for a long weekend, he will disappear with his camera and a few granola bars to capture the glory of a Texas Spring. The geographical place is the State of Texas and to represent Texas I have include the Long Horn, the state flower in the bluebonnet and the flag with the alphas I’ve used.” 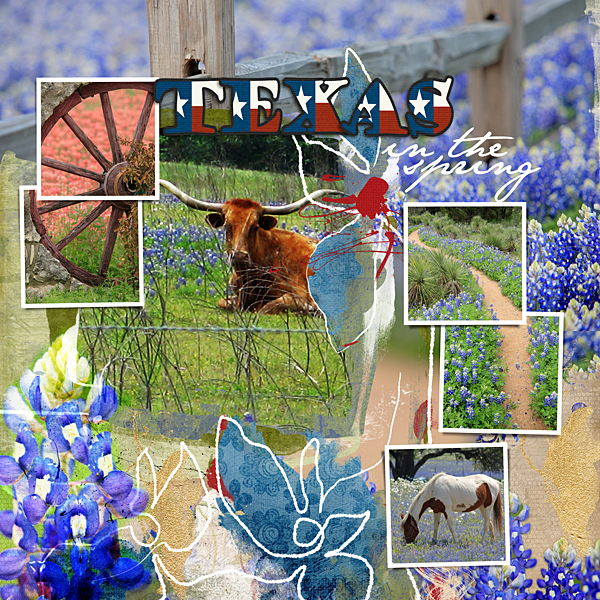 Lise made her background from a t-shirt residents of her hometown Island wore when she was younger. It names the island, shows a sketch of it and even has geographic coordinates.

Lise Mariann Alsli says, “The picture shows the island where I grew up and the beautiful mountain Hestmannen (or Horseman in English). I love this place, and I always cry like a baby when I leave the island. This picture is taken from the mainland when leaving. The page is about my love for the island and the mountains on the island.”

“My love is so strong that I could never get rid of the T-shirt I got 20 years ago picturing the island. I have tried throwing it out several times, but I just can´t… So the T-shirt ended its life as a background on my scrapbook page. Now it will never leave my house. The T-shirt became a huge hit amongst the 70 people living on the island 20 years ago and everyone got one. It became a symbol of us. The mountain is pictured from its most recognizable angle and the little islet with the polar circle monument is part of our pride because the polar circle is crossing Hestmannøy (Horseman Island). I loved using my treasured shirt on this layout to show off my pride to have grown up there. I also used the red and yellow flower above the mountain on the shirt to mimic the midnight sun which is the most beautiful thing I know.” 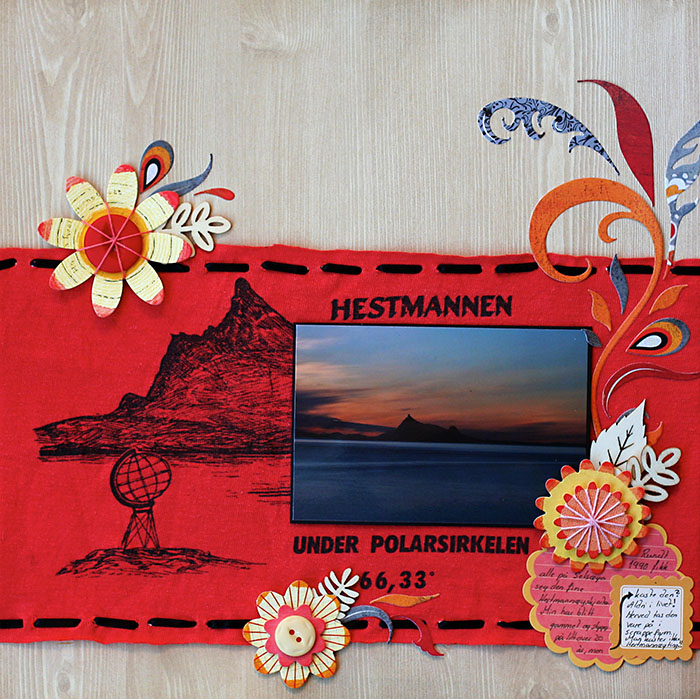 Marie-Pierre incorporated a map, the colors of the Spanish flag, the emblem of Sevilla (the bull), and a postcard of Flamenco, the official dance of the country.

Marie-Pierre Capistran says, “This is a page I made about the trip I made to Andalusia, Spain, in 2008, when I was pregnant of my first daughter. I made a double page layout, since for me it’s the best way to fit lots of pictures on a layout–and when I’m documenting a trip, chances are I have many photos and stories to tell.”

“On the left page I wanted it to be very evident that I am talking about our trip to Andalusia so I printed a map of the place in a 12″ x 12″ format, making sure that my itinerary is all there and clearly visible. I stitched it with red thread. I then used the name of the region I visited as my title. I made myself a cutting file using the logo of the Andalusia touristic maps I had on hand. I cut the name in red cardstock and used some yellow accents on my map to mimic the colors of the Spanish flag. The bull, emblem of Sevilla, found its place on my titlework next to the Spanish flag and next to a postcard representing Flamenco, the official dance of the country. The right page holds only the photos and short stories that happened during our trip.” 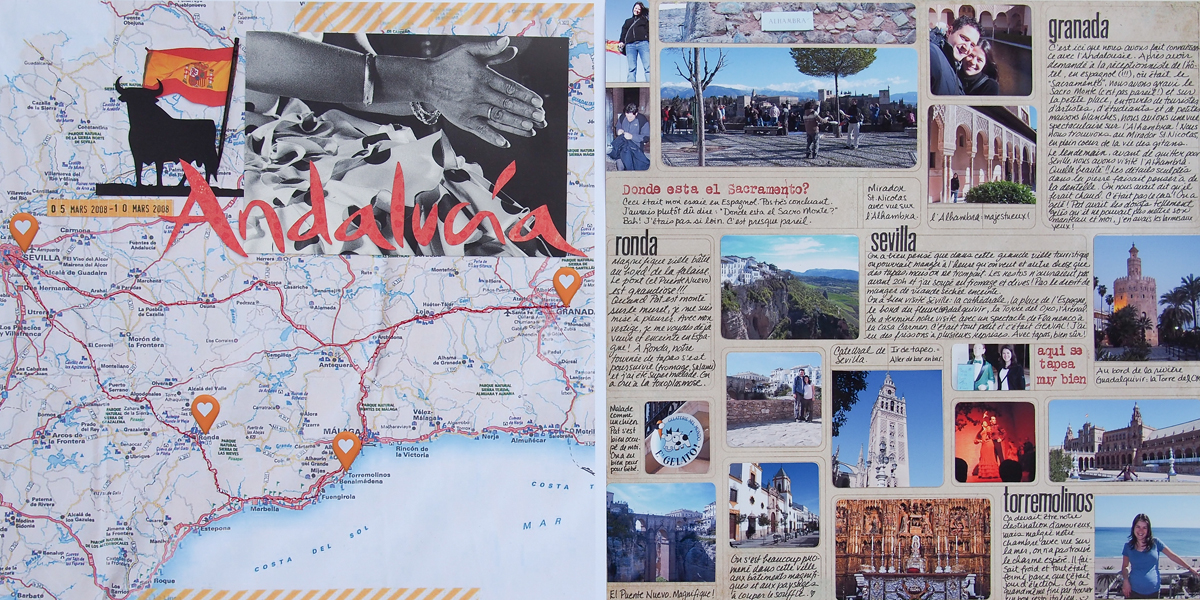 Rosann and Stefanie simply used a round-up of cityscape photos for their well-loved home cities.

Rosann Santos-Elliott says, “I was born and raised in the Bronx, but I live in Brooklyn. For city people, those two boroughs could not be more different from one another. It takes at least 45 minutes to get from Brooklyn to the Bronx in optimal traffic conditions and anywhere from 90 minutes to two hours by subway. Bronx residents are Yankee fans and Brooklyn residents are Mets fans – at least that’s the consensus. One thing about Brooklyn is that there are spectacular views of Manhattan from almost every neighborhood. Every one of the photos in the layout was photographed from Brooklyn. Day or night, cloudy or sunny, it is hard to take a bad photo of the NYC skyline. I am always in awe.” 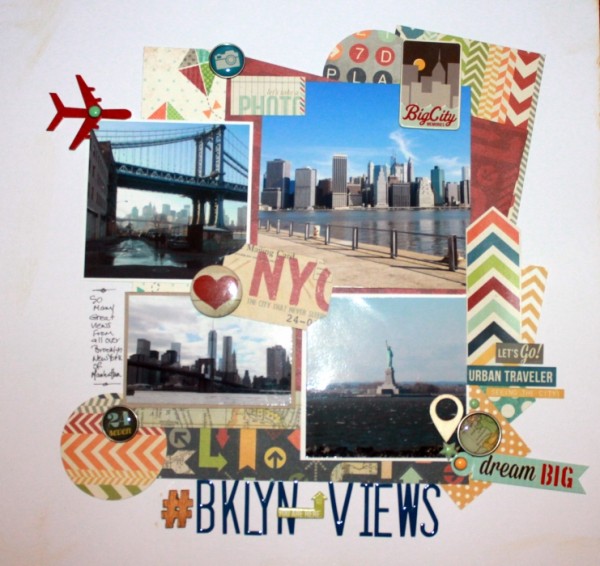 Stefanie Semple says, “This layout shows off my pride of my hometown and a well-known and loved landmark. I may not always be proudly South African, but I am proud of Cape Town. I love the city that I grew up in, especially its iconic Table Mountain. Having the maiden name of Bergmann (which means mountain man) meant that I used to (and still do) call it my mountain.”

“I gathered a selection of photos of Table Mountain and outdoorsy shots of the surrounds of Cape Town. I have traveled around the world, and there is no place like this City~ the Mother City. The rainbow people are friendly, accepting and welcoming and the City has a history like no where else. Cape Town has it all, fabulous beaches, wonderful mountains, vineyards, city life as well as surburbia and farming areas all within a 30 minute drive. I started with a template by Karen Funk Designs and tweaked it to resemble the shape of Table Mountain with Signal Hill and Chaman’s Peak on either side of it.” 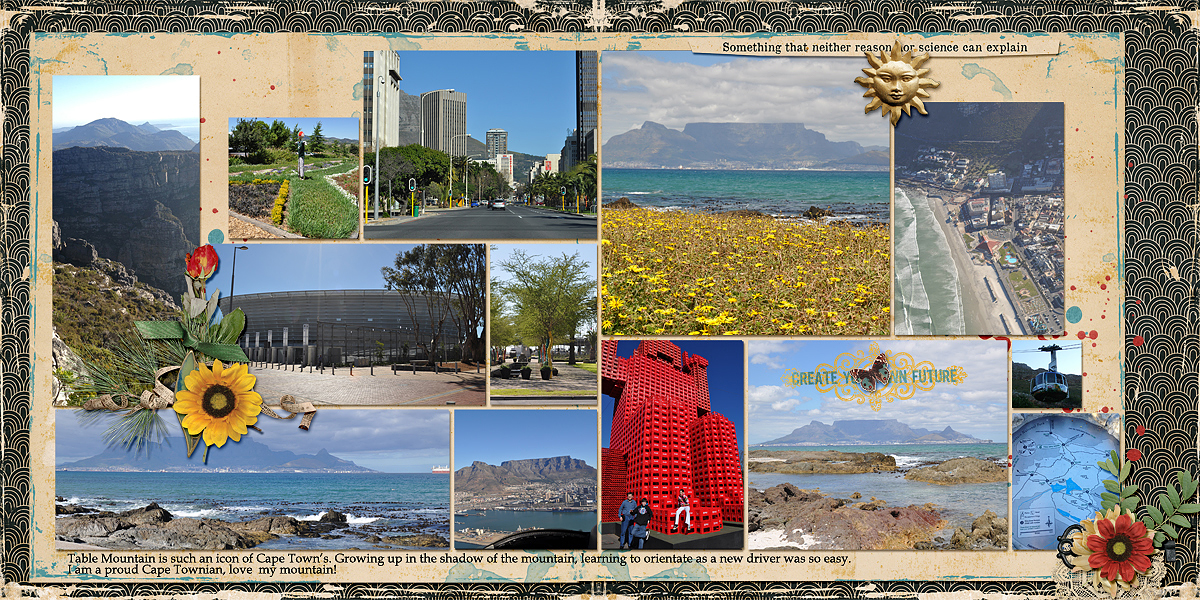