Ideas for Scrapbook Pages about Gifts Given and Received 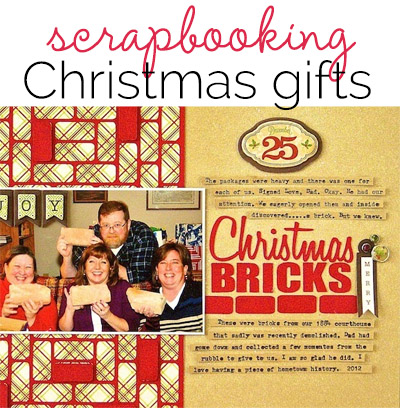 Giving and receiving gifts is key part of Christmas celebrations for many of us. Surely you have a gifting story, whether from Christmas or another season: a story of how a gift surprised you, made your life better, or just gave you a deeper understanding of your relationship with the giver. The Get It Scrapped Creative Team shares gifting stories on scrapbook pages here.

Sue Althouse‘s  journaling tells the story: “The packages were heavy and there was one for each of us. Signed Love, Dad. Okay. He had our attention. We eagerly opened them and inside discovered…a brick. But we knew. These were bricks from our 1884 courthouse that sadly was recently demolished. Dad had gone down and collected a few momentos from the rubble to give to us. I am so glad he did. I love having  piece of hometown history.” 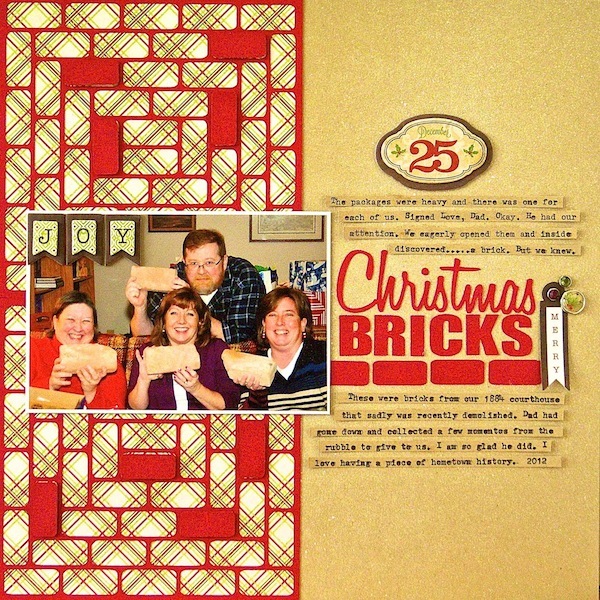 Brenda Becknell says, “My son bought this little Santa bear for me at the school’s Santa Shop, way back when he was in kindergarten.  He wrapped it in tissue paper and had to give it to me right away so I would have it for Christmas that year.  I loved the gift, of course, but even more, I loved the big smile on his face when he gave it to me.  Thirty years later, I still treasure this little Santa and set it out every year at Christmas time.” 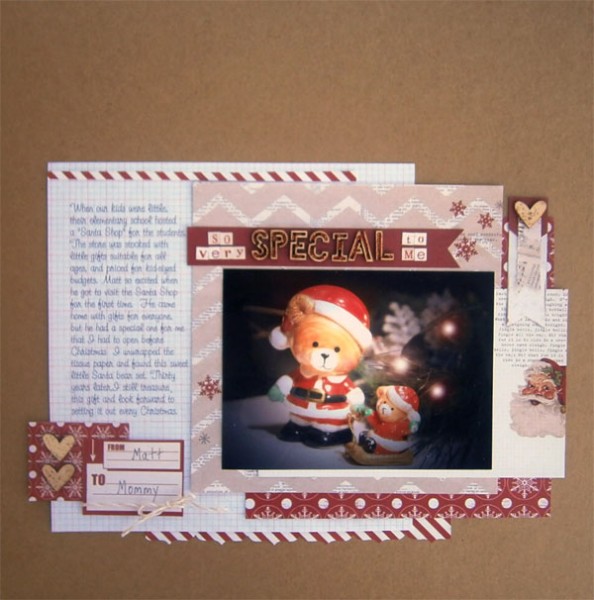 Heather Awsumb says, “n 2009 my siblings and I surprised my parents by buying our youngest sister, who was going to school in Germany at the time, a ticket home so we could all be together. It would be the first time we had all been together for Christmas in five years. My parents had no idea she was coming until she rang the doorbell while we were all watching a Christmas movie and decorating sugar cookies. It was the best gift I’ve ever given and I don’t know if I’ll ever be able to top it. For my page I used photos of us all together – decorating cookies, visiting Temple Square, playing Guitar Hero and a self-portrait family photo – that were taken during the time we had together.” 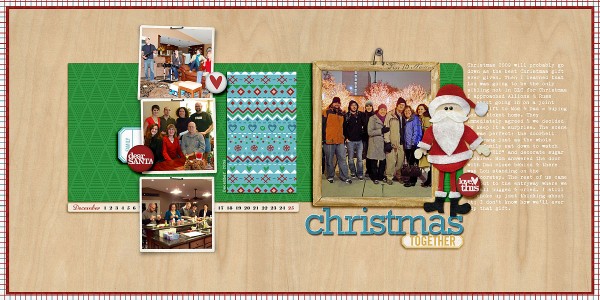 My sister in law used to travel to France a lot for her business. My daughter always answered, “Something French,” to the question: “What you want me to bring you?” When you are on a business trip it isn’t easy to go shopping leisurely, and she never found something that would satisfy a demanding and fashionable six-year-old girl.”

“After one trip, my daughter demanded, “Bring me the Eiffel Tower or nothing.” We had good laughs with her attitude and her aunt returned with a bag full of Eiffel Towers in the form of bag, charms, bracelets etc. And when my daughter looked at them, she said, “Oh this Eiffel Tower is no big deal after all.” 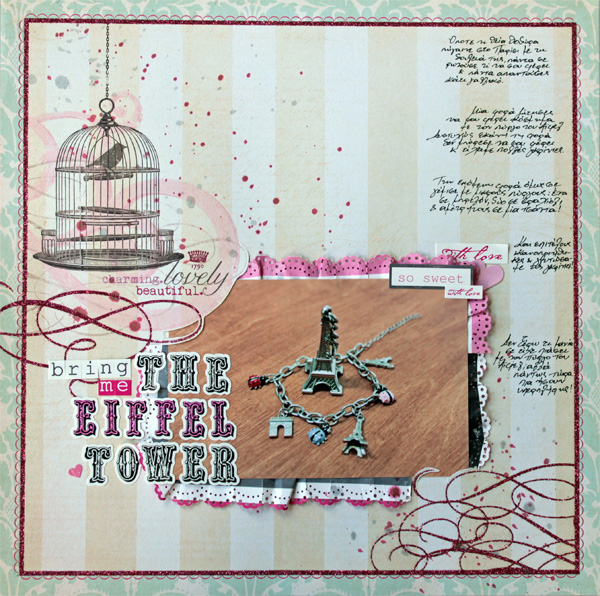 Katie Scott says “This is the story of when you get a gift that isn’t you or that reveals that your relationship with the giver isn’t as close as you might like it to be.  I used one original old film photo from 1988 so I did not want do a lot to detract from it and used just one glittered ribbon as embellishment.  I typed up the journaling and added Mrs. Grossman’s vellum letters over top of the journaling to make it more difficult to read since it is a bit of a sensitive topic. The title is also purposefully difficult to read since the story is about how I felt like my mother didn’t really get me. I’ve made it so that someone looking at this page might need to work a little harder to see both the title and the journaling.  This type of hard to read journaling is an alternative to hidden journaling for me.” 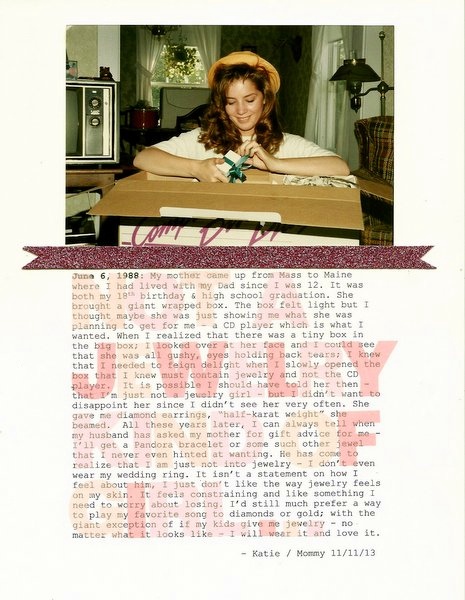 Christy Strickler says, “My son received a vinyl Minecraft Creeper for his birthday. My son is getting older and it’s getting harder to find something to give him that is a surprise. The Creeper is a very frivolous gift and something he never expected. Knowing that he is obsessed with Minecraft, my husband and I were very delighted to surprise him with it.” 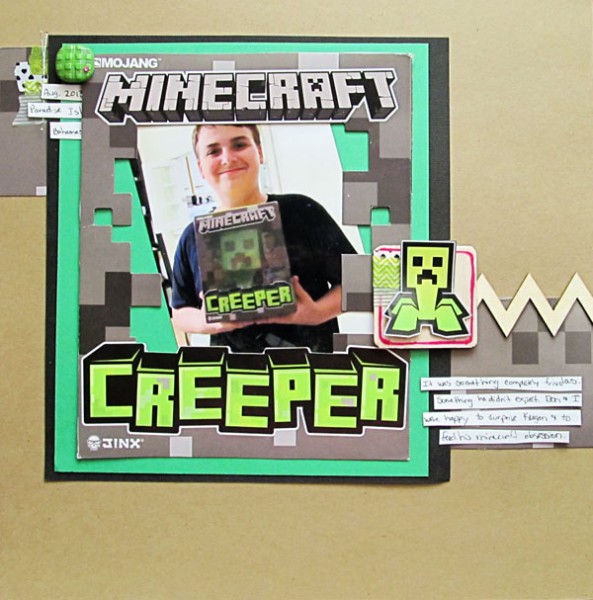 Andrea says, “This page is about how one gift can bring about many changes. My camera has brought me so much joy and creativity. I have used the recent photos simply to show what I have learned.” 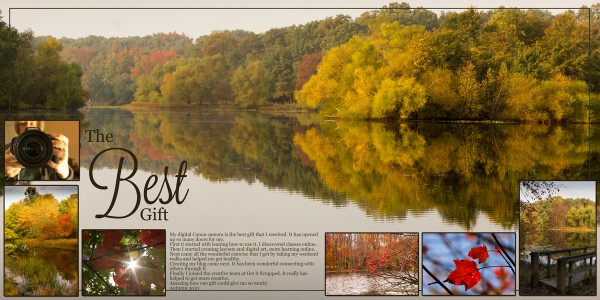 The Best Gift by Andrea | Supplies: Fonts, Lavanderia and Georgia.