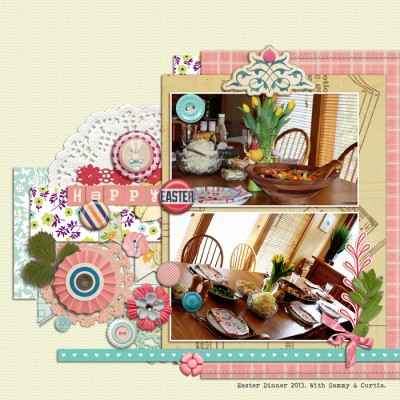 When I began this page I knew that I wanted to make a page that included lots of buttons and pretty bits in a profusion alongside two photos from the Easter Table.

I started with two same-sized photos. It took me a bit of time to figure out that I needed to limit my color choices and make a foundation for those many little bits in order to make piece that was unified rather than chaotic.

Beginning with two photos is a common starting point for me. You can learn to make great looking pages efficiently by using this kind of a starter at GetItScrapped.com / scrapbook coach.