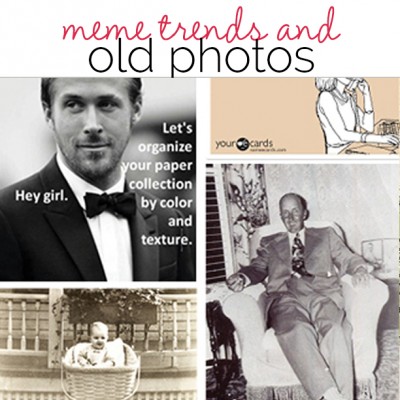 Richard Dawkins originated the concept of “meme” (short for the Greek mimeme, “to imitate”) as a way to explain the spread of ideas and cultural phenomena. He cited melodies, catch-phrases, and fashion as memes.

With current technology, memes now take the form of images, videos, and hashtags. These memes are passed electronically in emails, status updates or blogs.

There are several fun meme trends on the internet right now, including the “Hey Girl” photos of Ryan Gossling, the humorous “What You Actually Look Like” trend, and e-cards with unexpected and funny messages.

Memes are fun and a reflection of current times, and they can make scrapbooking old photos fun. Three ideas follow.

The Dear Photograph  meme suggests you physically take an old photo back to the place it was originally shot. Hold the photo up in roughly the same spot it was taken and take a new picture. Then add a brief caption, as if you were writing to the photo, thus “Dear Photograph.”

The resulting photo has depth, interest, and, of course, nostalgia.  It shows how the world around us has changed. These photos are endearing and make scrapbooking easy since you can easily use the caption for your journaling. 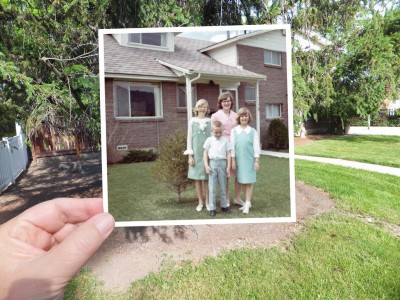 Masterful Scrapbook Design member Joyce Wans is the sibling in pink in this 1964 photo that she photographed in the same spot in 2012. That little tree sure has grown.

Masterful Scrapbook Design member Joyce Wans went on a journey to take photos like this at her childhood home. Here what Joyce has to say about this venture:

Thinking about a shooting plan, I organized the photos so that I would not be criss-crossing the yard for each shot.  I put the photos in order in my left pocket and moved them to my right pocket as I finished with them.

Approaching the current owner can feel traumatic!  I decided to just show up with a Plan A and a Plan B.  Plan A was if I had permission and access to the yard.  Plan B was if I didn’t and could only shoot from the street.  As it turned out, the owner drove up as I arrived so I was able to explain my project while she was standing outside in “safe” territory.  I asked questions about old neighbors so she would know I really was a prior resident.  She gave me permission to shoot in both the front and back yards.  I was prepared to leave some of the ’60s photos of the house for her but she didn’t care.

As for the actual photographing:  Do your best to stand where the old photographer stood and line up the picture.  It will not be perfect.  Pick a dominant feature such as a sidewalk, street, or roofline.  I shot two of each, one with the old photo in the frame and one of the same shot without the old photo.

Some difficulties you might face during the shoot include finding that something is now where you want to stand, sun glare or wind on your old photo, and avoiding looking at appalled at changes in the property!

You may feel emotional stress such self-imposed pressure to finish quickly (organization is your friend) or dealing with ghosts — a number of my old photos included relatives who are now dead. Listen to Joyce talk about this on The Digi Show. 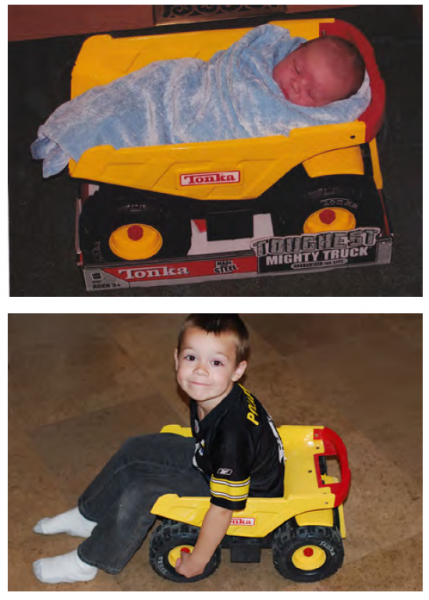 This meme has a few names. You can see examples by searching the internet for “recreate childhood photos” or “young me now me” and via these links:

When my son Zach was born he received a big tonka truck. My husband set him in there and we took this first photo. We put him in that truck for photos several times his first year of life, and now we do it on his birthdays.

Here is a photo from his fifth birthday. I will be honest, I am looking forward to seeing him 40 and trying to fit his back end into this truck.

As with the last meme, you recreate a scene from an earlier photo, but instead of using the same people and showing how they change, you use the next generation of family members.

You can see a few examples of this on the blog BellyItch.

I found this amazing photo of my father-in-law with my husband (middle) holding his new baby sister in 1970. I immediately set out to bribe family members to recreate this heart-warming scene.

Don’t underestimate the giggle factor. Getting loved ones to make silly faces and put their hands on each other may lead to snickers and tickling – and fuzzy pictures because no one can sit still. But it also leads to a fun night and questions on who is in the original picture which leads to an impromptu lesson on heritage and family.

Tami Taylor writes for Get It Scrapped!, teaches at Masterful Scrapbook Design and previously owned Creative Passion Classes.com. To learn more about Tami check out her blog, The Taylor Life.