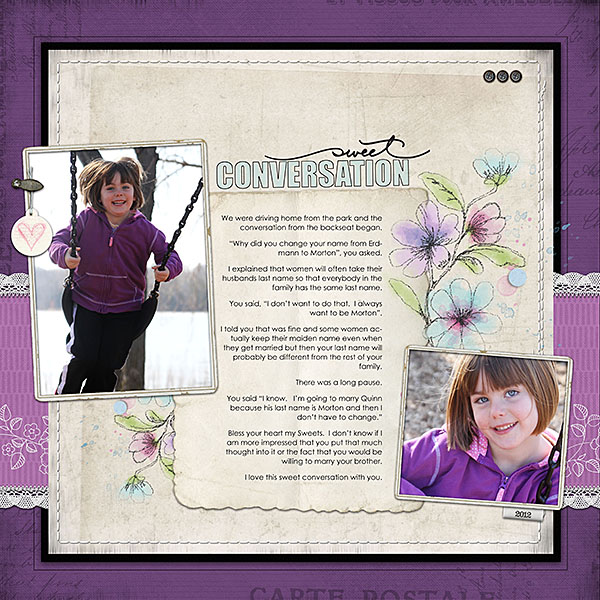 When you’re making a page with two photos, your photo sizes and crops as well as the orientation of your photos will impact how your arrange elements on the canvas.

See how the pages below work with a variety of cropping and orientation choices. See, also, how to begin with the same crops over and over and get different looks.

Crop proportions. Will each of the photos be cropped to the same “width to height” ratio? In a 5″ x 7″ portrait crop, the height is about 1.4 times the width. So a 5″ x 7″ photo and a 2.5″ x 3.5″ photo both have the same proportions of width to height. Change one of those photos to a square, though, and you’re working with different crop proportions. Neither of these scenarios are better. Rather, they each lead to different compositional choices when you combine the photos on a canvas.

Photo sizes. Will the photos both be the same size or differing sizes? If they are the same size, how will you create a focal point?

Crop orientation. Will your photos both be oriented portrait or landscape, or will you mix the two orientations — or will you, perhaps, throw in a square crop?

Amy Kingsford stacked two same-sized, landscape-oriented photos, separating them with journaling and titlework. Amy says, “This tidy configuration draws attention to my story and still lets me  have fun with colors, patterns, and elements without the page becoming chaotic.” 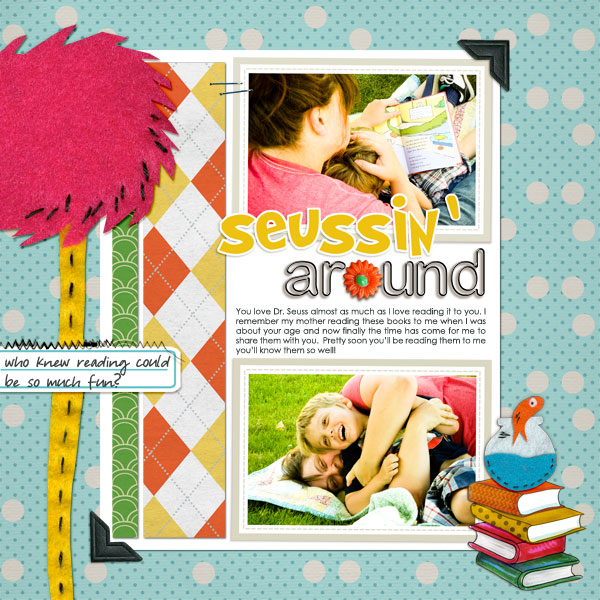 Tara McKernin says, “This is a layout about my dog Cali. She’s turning 14 this year. Yes, 14. It’s crazy.  I wanted to keep this layout focused on her photos so I limited my embellishments and kept it  and simple.”

See the similarities and differences with Amy’s layout above. Again, there are two landscape-oriented photos stacked vertically, but Tara has placed the photos abutting one another while Amy separated hers with titlework and journaling. Tara notes that she could have easily separated these photos but says, “I liked the editorial feel it has with the journalling and the images stacked.” The journaling and title sit beneath the photo grouping. 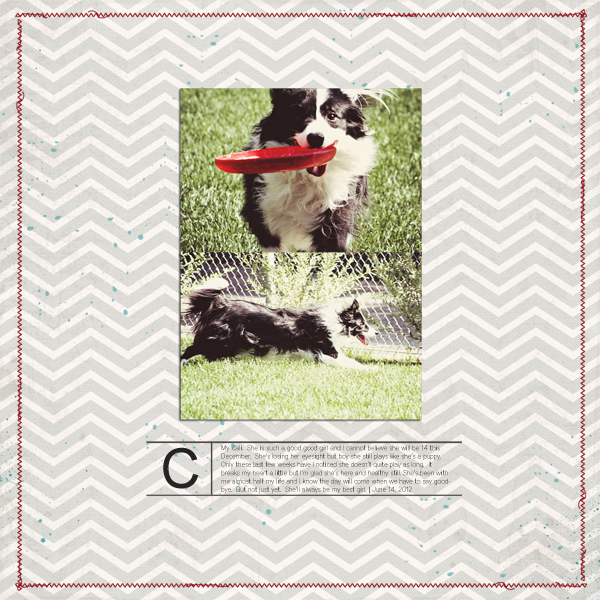 Debbie Hodge stacked two same-sized, landscape-oriented photo on “Last Leg” and placed the two at tilts and to overlap. 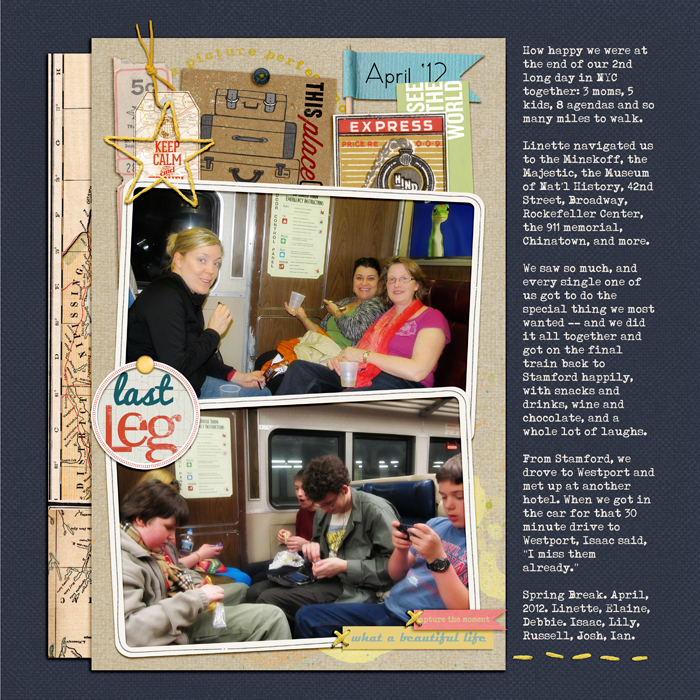 On Barb Brookbank‘s “Your Smile,” we see, again, two stacked photos. The differences here are that the photos are square, each is framed and tilted, and the grouping sits to the left of horizontal center on a foundation alongside other elements to create a cluster.

Barb says, “I chose two similar photos and cropped them so that my sweet grandson’s face is the same size (same proportion) as the other one. I used brown tones to match with the brown tones in his sweater. I added the blue border/mat to contain everything and to add interest.” 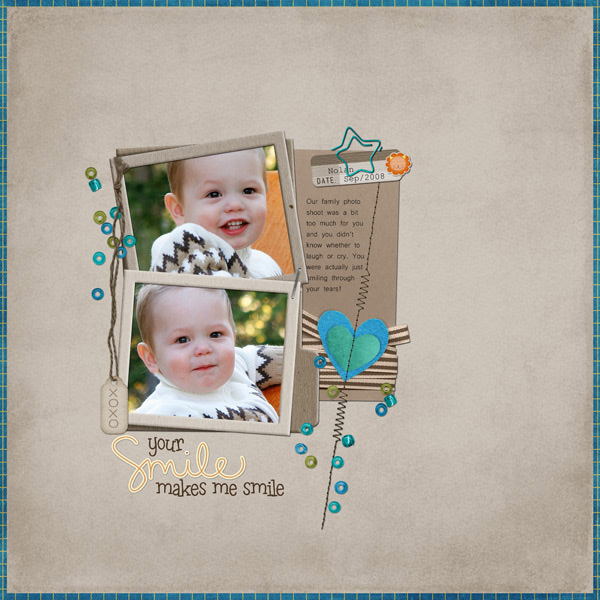 Sue Althouse placed her two landscape-oriented photos to form a band across the page. Sue says, “One of my favorite techniques for choosing two photos is that of contrast and comparison. These pictures of the interiors of my husband’s and my cars not only provides visual evidence of our preferences, but allows an opportunity to journal about our cars and driving habits.” 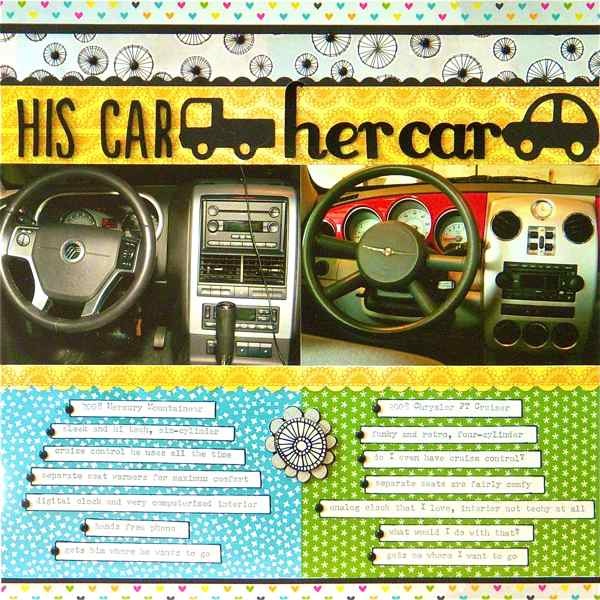 Brenda Becknell chose these two photos of her  granddaughter with a brand new baby brother, because she loved the way her granddaughter was smiling at the camera in one photo, and then looking at the baby in the other photo. The square cropped shots are placed next to each other  and to the right of horizontal center. A shelf of paper and lace sits below them. 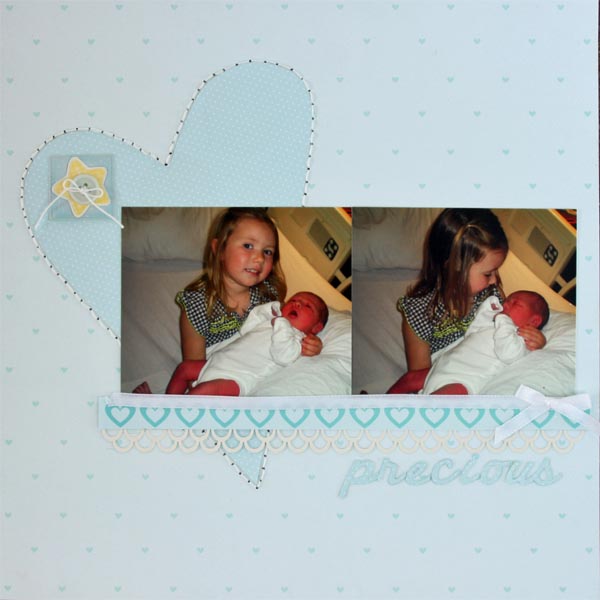 Katie Scott used two square photos of the same size on this page about her daughter’s Barbie world. Katie says, “She spends more time arranging and set designing the Barbie houses and accessories than having the Barbies play and interact. One photo focuses on her and the other on her surroundings.” 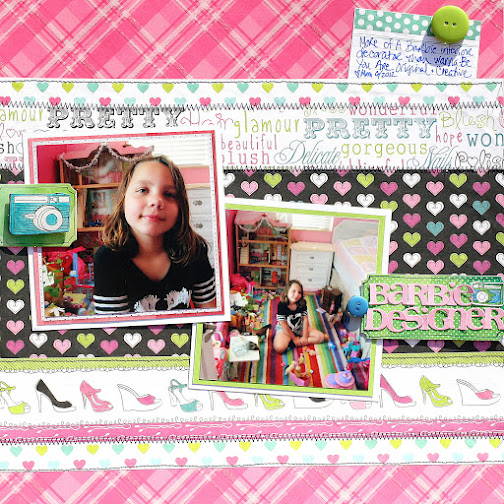 Debbie Hodge placed two 4″ x 6″ portraits of her son in diagonal corners on “J.” The page is divided into two columns with differing paper bases. 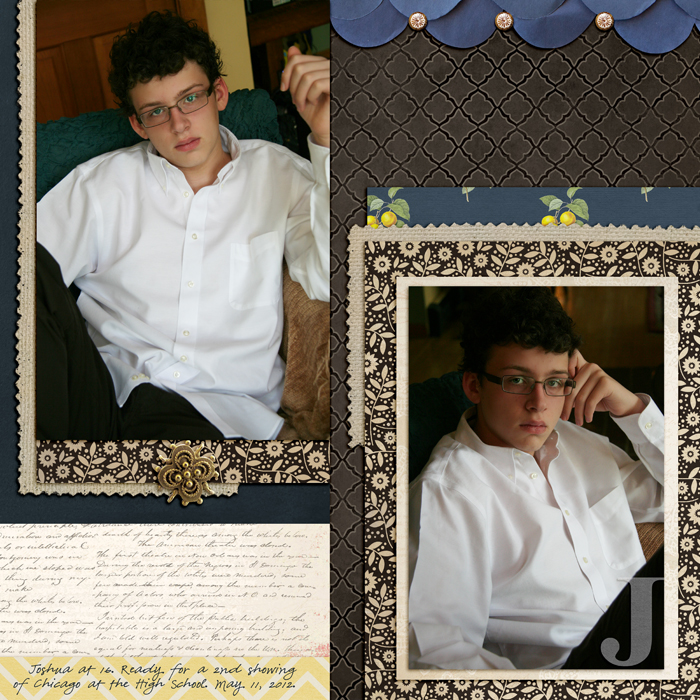 Lisa Dickinson’s photos on “She Makes It Look Easy” are of the same size and both have a narrow white mat. The photos sit in diagonal quadrants of a 2 by 2 grid. 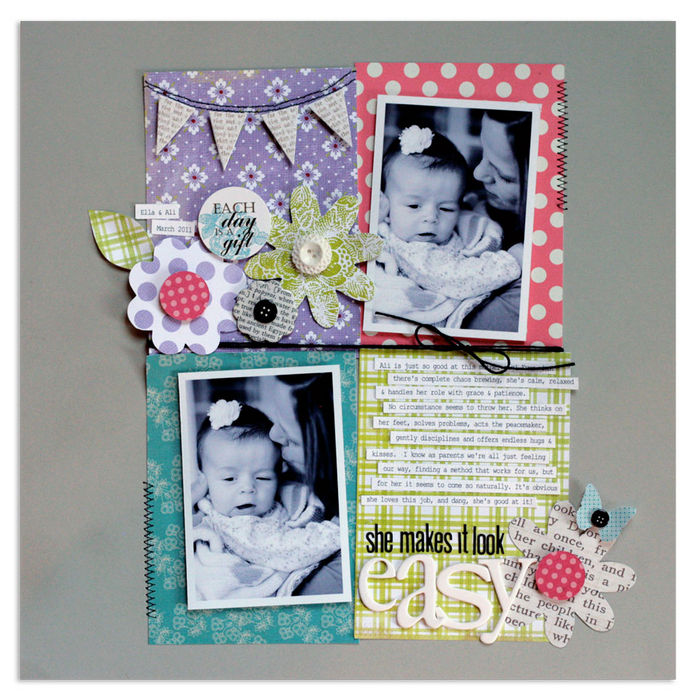 Emily Pitts place two-landscape-oriented photos with white mats in diagonal corners on “Who Could Blame Me?” While a grid isn’t explicitly defined, Emily filled the areas on the canvas based upon an underlying grid organization. 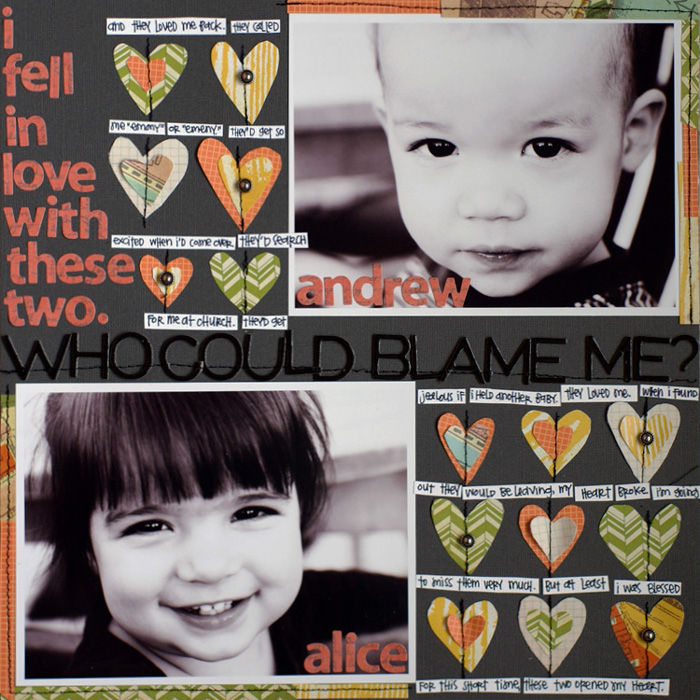 Meghann Andrew varied photo sizes on this page about a day that she spent at her local museum of natural history and I found out just how much her husband knew about the periodic table.

Meghann says, “I wanted to use two photos on this layout because I loved the closeup of his face with the periodic table in the background, but I also wanted to get the ‘bigger picture’ shot on the layout, so that you could see the awesome wall that he was examining. The wood veneer star embellishment are placed in a downward diagonal line that guides the eye from top left through the photos and down to the titlework.” 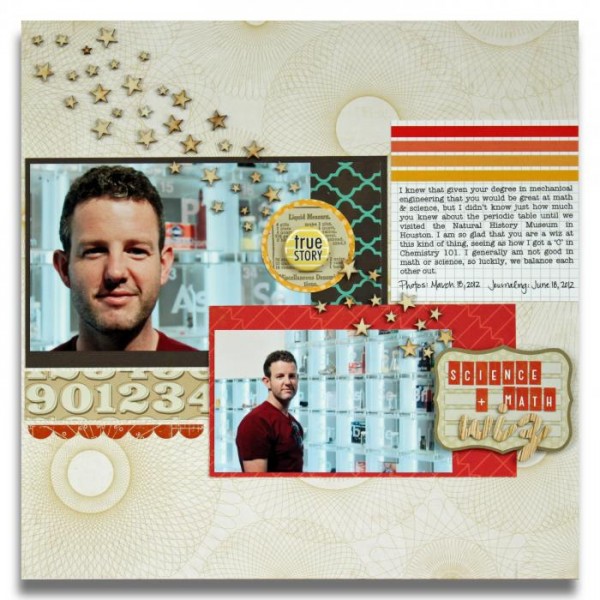 Tiffany Tillman clustered her portrait-oriented photos and cropped one just a bit smaller. This difference, along with the tilted placement gives the page a casual look — as legos scattered across the table would have. 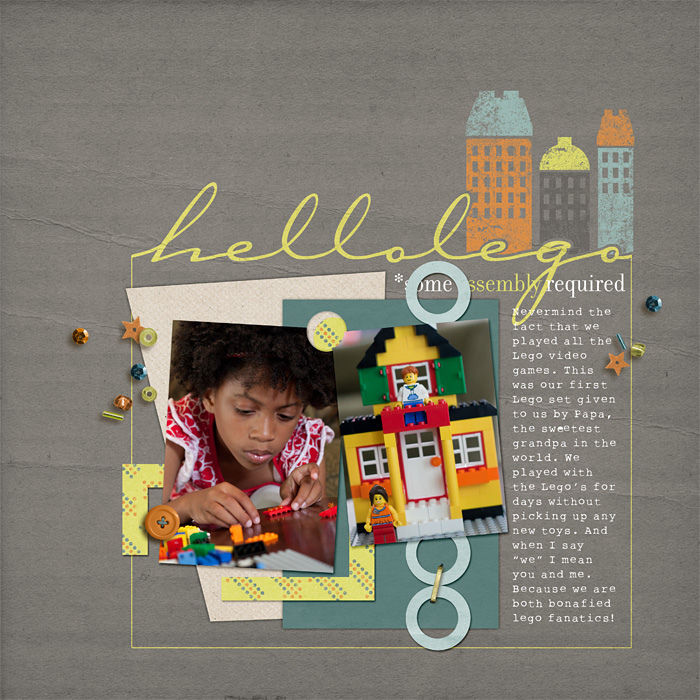 When your photos are of different orientations but close in size, the challenge is to balance around a “T” or “L” shape. Debbie Hodge “blocked” around the two photos creating a rectangular cluster. She added strong lines below the cluster (including a patterned paper strip, stitching and journaling block) to support the weight of the grouping. 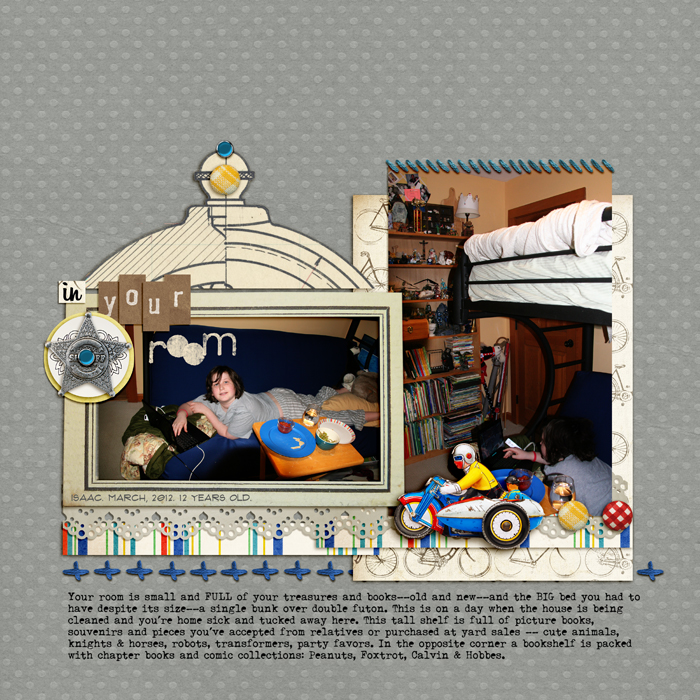 Debbie Hodge united the two photos in the “T” configuration on “Spring Fever” with a layered foundation beneath the two photos and, again, the strong lines of a solid block of journaling spanning the width of the grouping. 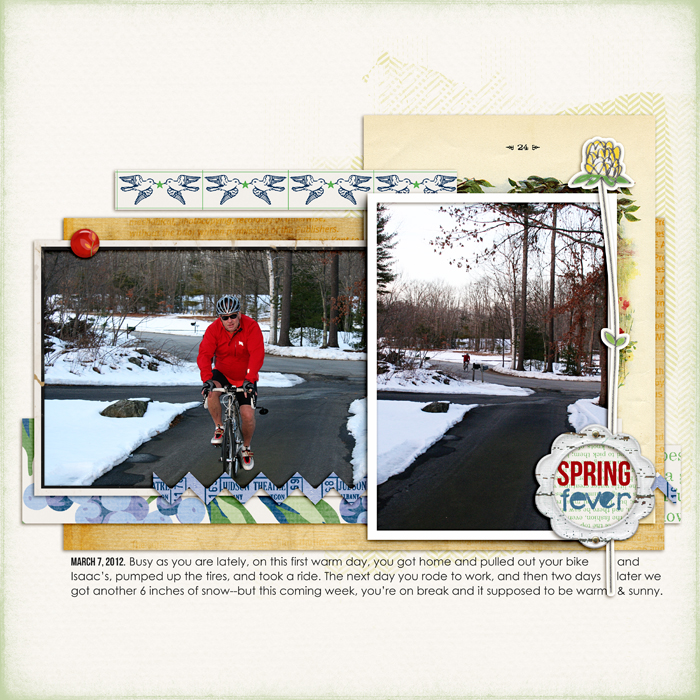 Jana Morton says, “The most important aspect of this page is my journaling because I wanted to record this conversation with my daughter.  I journaled on a deckled card mounted at page center, and then I anchored the journaling card with two photos, tilted, and framing the journaling at diagonal corners.  When the journaling is framed this way it becomes a more important part of the page.”

Debbie Hodge used two photos with substantial contrast in size on “Easy to Tickle.” A smaller square photo plays a supporting role to the larger landscape-oriented portrait. The two photos are arranged as a part of a downward diagonal line that begins with paper clips and journaling at top left and flowing down to bottom right. 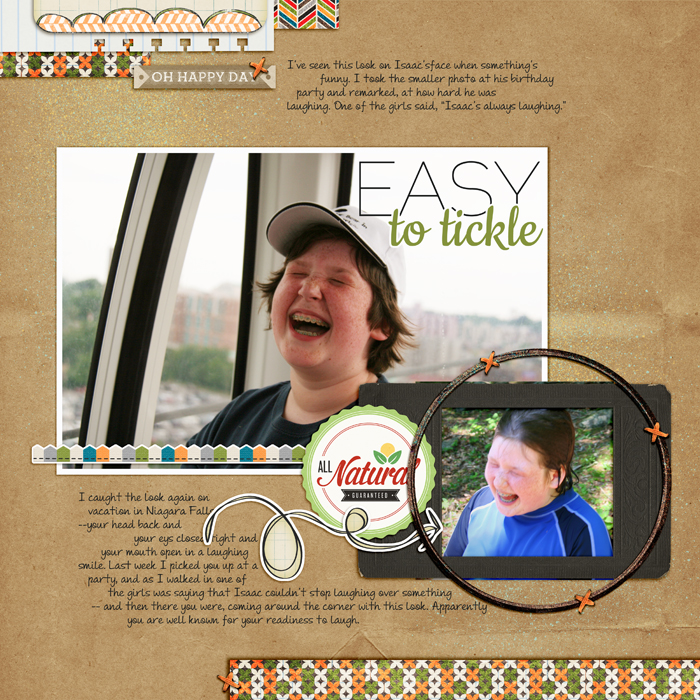 The next time you know you’ll be using two photos on your page, consider your cropping possibilities and the resulting starting places for page composition.