It is a truth universally acknowledged that a single man in possession of a good fortune must be in want of a wife.
-Jane Austen in Pride and Prejudice, 1813 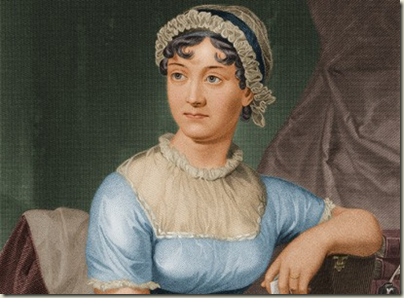 The beauty of the opening line to Pride and Prejudice (above) is that it plays with perspective.

Who acknowledges this truth? The single man? Probably not. The mothers of young women? It is, in fact, Mrs. Bennett, who has five unmarried daughters, who says this to her husband upon learning that a new neighbor is a gentleman of wealth.

Consider the different perspectives to your own stories

Considering different perspectives as you scrap your own stories and photos will give you pages that tell stories with more complexity and truth.  As you’re remembering a story, think about having a camera on your shoulder, filming what goes on. You’d get a good idea of your own perspective. What about, though, putting the camera on someone else’s shoulder, or up in a corner near the ceiling, aimed to take in the whole wide angle of the room? This is the point at which your perspective diminishes and others enter. 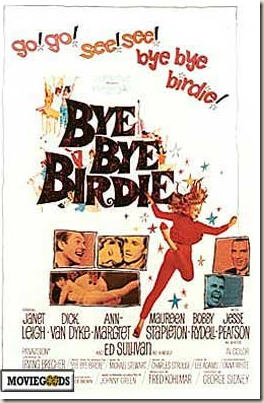 There are several approaches to take to achieve this end — and I’ll share these over the next few months. Today, though, we’ll start with comparing two opposing points of view.

In the musical “Bye Bye Birdie” there’s a scene in which the girls are marching to the town square singing “We love you, Conrad. Oh, yes, we do-oo!” while the boys are marching in from another direction singing, “We hate you, Conrad. Oh, yes, we do-oo!” Neither side is wrong — they just have differing perspectives. It’s the continued look at those perspectives throughout the story that gives it tension and makes it believable and interesting. 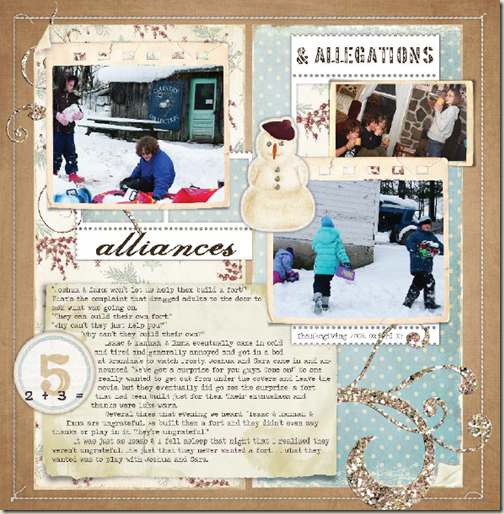 “Alliances & Allegations” is a layout that records a contentious afternoon between siblings and cousins. Both sides were so adamant in their protests that I went to bed that night thinking about them.

That’s when I realized I needed to let go of my own perspective, which was: 1) an adult being interrupted all day with complaints; 2) a mom to two of the players; and 3) the only defender of the group being called whiners by the other children and adults. The journaling tells of what I came to understand when I thought more about what was going on from other points of view.

JOURNALING: “Alliances & Allegations”
“Joshua & Sara won’t let us help them build a fort!”
That’s the complaint that dragged adults to the door to ask what was going on.
“They can build their own fort.”
“Why can’t they just help you?”
“Why can’t they build their own?”
Isaac & Hannah & Emma eventually came in cold and tired and generally annoyed and got in a bed at Grandma’s to watch Frosty. Joshua and Sara came in and announced, “We’ve got a surprise for you guys. Come on!” No one really wanted to get out from under the covers and leave the movie, but they eventually did go see the surprise–a fort that had been built just for them. Their enthusiasm and thanks were luke-warm.
Several times that evening we heard, “Isaac & Hannah & Emma are ungrateful. We built them a fort and they didn’t even say thanks or play in it. They’re ungrateful.”
It was just as I fell asleep that night, finally in quiet after a busy day, that I realized they weren’t ungrateful. It’s just that they never wanted a fort. What they wanted was to play with Joshua and Sara.

More than the journaling

In addition to considering differing perspectives in the page’s journaling, there are several other choices I made to emphasize meaning and the idea of two sides to the story.