A Brief History of Scrapbooking in America

by Debbie Hodge | About Memory Keeping, Get Started

From my interview with Patricia Buckler, co-editor of The Scrapbook in American Life in 2006. 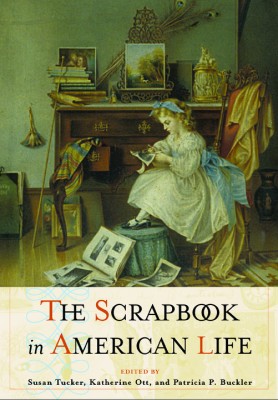 “Scrapbooking is not just a craft or a way to pass the time, but a serious activity designed to speak to the future about life as we know it,” says Buckler. The essays in her book are written by historians, librarians, and curators. Think about it: today’s scrapbook is tomorrow’s artifact. My favorite essay described “scrapbook houses,” which were made by girls and women between 1875 and 1920. They were self-contained worlds full of realistic and fanciful details as well as pieces of mass market magazine advertisements–what we would now call “collage albums.” Other essays look at the scrapbooks of a bordello madam, 19th century medical practitioners, the author Willa Cather, children, and housewives.

Buckler’s advice to current-day scrapbook keepers is to “take to heart the importance of including not only photographs and decorations, but also the actual items that represent your experiences—like tickets, programs, certificates, corsages, wedding invitations, and birth announcements. Otherwise,” she says, “We will lose important artifacts about daily life.” She also encourages writing comments in your own handwriting so that your grandchildren will come to recognize it on other family documents.

Timeline of Scrapbooking/Memory Keeping in America

The Early Greeks used koinoi topoi, or “places in the mind” as memory aids for recreating events and recalling info.

The gradual introduction of paper into Europe.

The advent of the printing press.

With the early Renaissance, artists and collectors preserved prints, bookplates, and other ephemera in albums to make them more available for public use.

The Commonplace Book was a blank book kept by both schoolboys and statesmen to gather notes for speeches and writing, and other fragments of memory.

James Granger published a history of England with blank pages so owners could collect and add engravings. Thus, the “Grangerized” book came to mean a printed, bound book with blank pages to be personalized by each owner.

With the invention of photography, photographs could now be put into the albums, and the variety of albums available widened.

A variety of patented photograph books and scrapbooks became widely marketed, with Mark Twain patenting and marketing his albums as “the only rational scrapbook the world has ever seen.” His book came with pages already coasted with mucilage, and others followed with improved bindings and methods that made pictures easier to manipulate. (1873)

Color printing technologies became available and there were a multitude of cheap, color images available to the general public. In the 1880s, there was a fad among U.S. children, especially girls, of making scrapbooks from  advertising trade cards, calling cards, religions verse cards and the decorative die-cut paper known as “scrap.” The public education movement commended scrapbook keeping as an educational and moral tool. (1880s)

The “snapshot era” was to begin with Kodak introducing lighter-weight print papers and rolled film.

The emphasis in album keeping became more and more on photographs.

A new and growing interest in genealogy created a resurgence of scrapbook keeping.

The Christensen family displayed 50 family albums at the 1980 World Conference of Records in Utah. Soon after they wrote the book “Keeping Memories Alive” and opened The Annex, the first modern-day scrapbook retail store, in Spanish Fork, Utah. Many Mormon families, are required by the Church of Jesus Christ of Latter Day Saints to document their family history. Because of the large Mormon population in Utah, many scrapping companies began there.

Improved technology allows scrappers to take digital photos, print photos at home, meet and share with other scrapbookers on the Internet and shop for supplies via the Internet. Scrapbooking’s popularity grows.

Weblogs begin to be used as a place to post thoughts, diary/journal details and photos.

Page layout software, affordable scanners and a variety of new printing options make digital scrapbooking possible. Photos, ephemera and embellishments are created using computer software, saved to a computer file, and stored in a digital album, and/or a printed for inclusion in physical album.

Online services let you set up your own photo and video sharing website — your “virtual” scrapbook.